Leon, the natural fast food British import located at 1724 L St. NW, recently added the plant-based LOVe burger to its menu. (Ve is the symbon on Leon’s menu for vegan dishes.) It is made of 100 percent plants and is the first of many vegan additions for 2019. 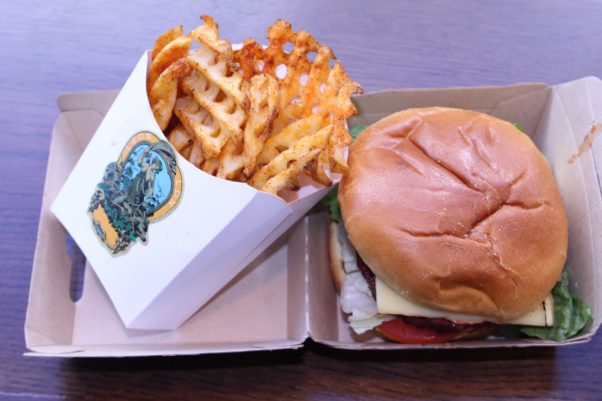 Leon’s LOVe burger is a vegan soy-beetroot patty that tastes and feels like a beef burger. (Photo: Mark Heckathorn/DC on Heels)

The new vegan burger is made with a soy-beetroot patty and is topped with a vegan Carolina mustard mayo, Leon’s burger sauce, tomatoes, pickles and a slice of smoked gouda-style vegan cheese.

“The LOVe burger is made up of everything our guests love about Leon – it’s fast food that both tastes good and does you good,” said Glenn Edwards, managing director, in a press release. “As with everything Leon does, this plant-based burger continues making it easier for everybody to eat well and live well, while being kind to the planet. Our guests in the U.K. have raved about this fast food blockbuster, and we are excited to introduce it here in D.C.”

According to the company, it developed the LOVe burger in response to a growing body of evidence supporting a link between gut and mental health. Recent research has found that a more plant-based diet can encourage the growth of healthy gut microbiota that in turn can talk to the brain – the gut-brain axis.

Additionally, dishes like the LOVe burger, made entirely of plants, can help reduce the carbon footprint of heavy red meat consumption.

BUT, I have never tasted a vegan or veggie burger that could take the place of a beef burger. Don’t get me wrong, some are tasty, but they could never replace a real cheeseburger either because of their taste or texture. 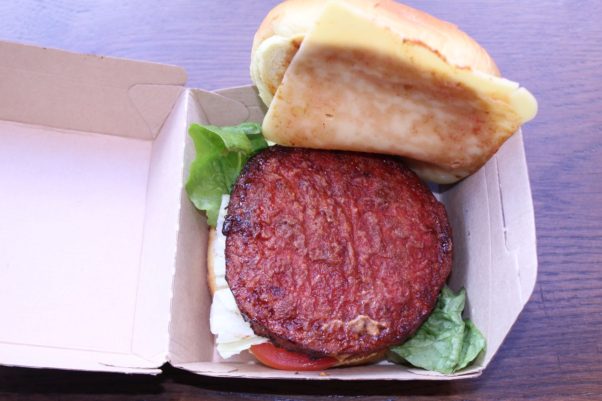 The vegan patty is a bit redder than a meat patty, but otherwise looks and feels like one. (Photo: Mark Heckathorn/DC on Heels)

So, I headed to Farragut North and the first U.S. location of Leon – a second will open near the Washington Convention Center at 655 New York Ave. NW this spring – to put the $7.95 LOVe burger to the taste test.

It arrives in the standard burger box and looks like a regular beef burger, although the patty is a bit redder because of the beetroot. So far, so good. But the true test will be in my mouth.

After taking my first bite, I could not tell that this was a vegan patty. The texture was spot on and the taste was delicious! My meat-loving palette couldn’t even tell that the patty was meatless or that cheese wasn’t made from milk and the mayo was vegan. If the menu didn’t say it, you would never know this was a vegan burger.

Now don’t get the wrong impression, Leon’s Mediterranean-leaning menu also includes meat dishes like chili con carne, pesto chicken meatballs and a lamb kofte wrap along with meatless dishes like sweet potato falafel and a truffled Portabella and halloumi sandwich. Next up is meatless meatballs, which are already on the U.K. restaurants’ menus. 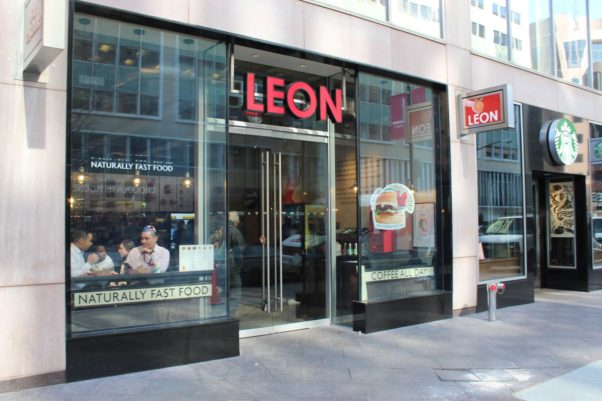 Pair the LOVe burger with a box of baked waffle fries seasoned with paprika and served with ketchup, garlic aioli, chili sauce or Korean mayo, or kale slaw for a healthy alternative to the usual burger and fries.