Seven stories up above the storefronts and streets of North Bethesda’s Pike & Rose mixed-use development, workers labor under the hot sun to pick produce that could, within hours, be on someone’s plate below. 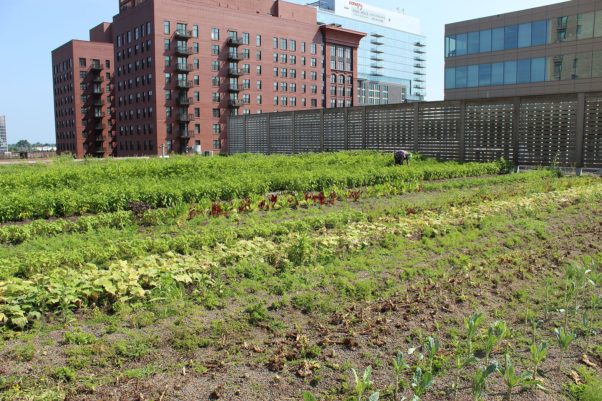 An employee of Up Top Acres harvests produce from atop a building at Pike & Rose. (Photo: Mark Heckathorn/DC on Heels)

In April, Up Top Acres planted the 17,000 square-foot “farm” – that is one-third the size of a football field – on a rooftop nestled between the iPic Theater and Pallas, a 21-story apartment building. In July, Up Top partnered with City Perch Kitchen + Bar, 11830 Grand Park Ave., North Bethesda. Now weekend diners can eat the produce grown on the roof in the restaurant’s “Chef’s Rooftop Salad” and other dishes.

The farm is the largest soil-based rooftop farm in the Mid-Atlantic region, according to Mickey Papillon, Pike & Rose’s general manager. He said the soil and irrigation system were already on the roof to meet Montgomery County building requirements for new commercial and multi-family buildings larger than 5,000 square feet, but it had been planted with ground cover. The vegetation and soil absorb and filter rainwater, help insulate the building and save energy.

In fact, most of the buildings at Pike & Rose have green roofs, but others aren’t as easily accessible or one contiguous space, Papillon explained. Workers access the farm by climbing a ladder, and a pulley and basket system was rigged to take the plants and supplies up and bring the harvest down, he said. 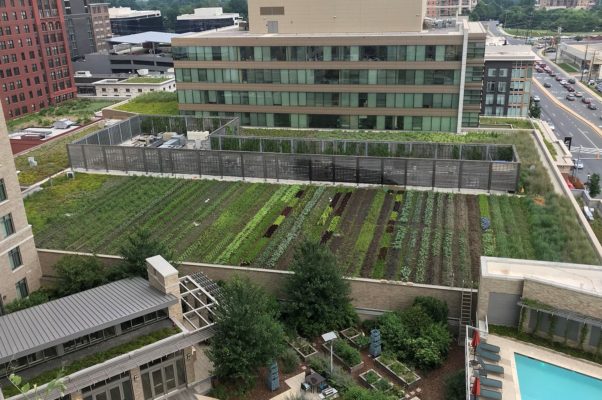 The Farm at Pike & Rose is 17,000 square feet, one-third the size of a football field. (Photo: Amy Flashenberg-Laskowski)

It is Up Top Acres’ sixth and largest rooftop farm, which includes farms mainly in the Navy Yard area of D.C. and one atop a building at Bethesda Row, said Sara Servin, manager of the Pike & Rose farm.

The farm has 42 rows of crops including tomatoes, peppers, okra, eggplant, kale and zucchini, along with basil, parsley and cilantro. In addition to City Perch, it supplies weekly vegetables to 35 farm members, many of whom can look out their windows and watch the food being harvested. Up Top Acres other farms supply produce to Blue Jacket Brewery and Ice Cream Jubilee, she said.

The CSA – community supported agriculture – members pay $270 for 13 weeks of fresh produce that they pick up every Friday at the Pike & Rose leasing office or Saturday at the farm market near REI, Servin said. It is currently sold out. A typical bag includes six or seven different items, depending on the time of year. A recent harvest included 46 pounds of cucumbers, 18.5 pounds of kale, 25 pounds of shishito peppers, 8 pounds of okra, 4 pounds of basil and 2 pounds of parsley. 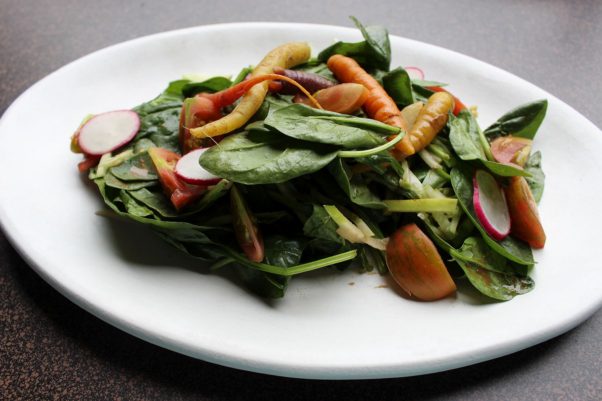 City Perch general manager John Foster said the produce arrives just in time for the weekend and is used in various specials depending on the harvest. “The vegetables arrive on Friday and are usually gone by Sunday,” he said.

A special each weekend is the “Chef’s Rooftop Salad,” which changes weekly since it is made entirely of the just-picked produce from that week’s harvest. Other produce from the roof has been used in a chicken-apple-kale salad or as braised kale for a side dish (kale was plentiful the week we visited), or in an heirloom tomato salad on the bar bites menu, said City Perch’s chef de cuisine Luis Romero. 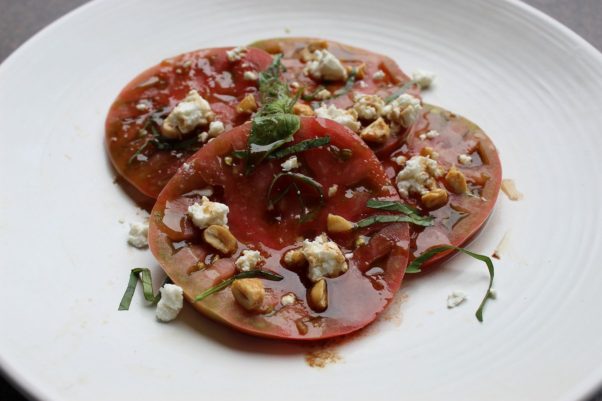 Heirloom tomatoes from the rooftop was on the bar menu recently served with basil, blue cheese and a balsamic vinaigrette.
(Photo: Mark Heckathorn/DC on Heels)

Foster said it is great having the farm just above the restaurant to get the freshest product available, even though all the restaurant’s food is sourced from Maryland, Virginia and Pennsylvania.