Dinner with a Side of Sexual Harassment

Fallout was swift to the news that a former top manager had sued celebrity chef Mike Isabella, his company Mike Isabella Concepts (MIC) and his partners for repeatedly sexually harassing her in the workplace. 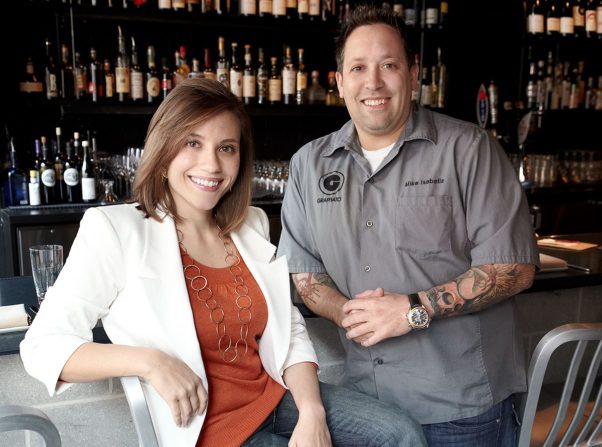 Isabella’s long-time publicist Jennifer Resick Williams and her company, Know PR, quickly scrubbed the chef and his restaurants from the company’s website except for one mention in her bio. Resick Williams has been with Isabella since he opened his first restaurant, Graffiato, in 2011 and he thanked her in his Crazy Good Italian cookbook “for being an extra set of arms, legs, eyes, and ears and an integral part of the work I do.”. Know PR did not return requests for comments on Tuesday. Resick Williams and the company have also been removed as PR contacts from the websites of Isabella’s restaurants.

Also, the Season 6 Top Chef contestant’s picture next to those of Andrew Zimmern and Isabella’s former boss José Andrés as a special guest was removed from the website for Dine-N-Dash, which raises funds for Andrés’ World Central Kitchen. However, Graffiato and a pop-up by Requin, two of Isabella’s restaurants, remain on the list of participants.

“Mike Isabella’s image was removed from the Dine-N-Dash website in order to clarify his role in this non-profit event. Graffiato is currently included in the line up of 30 restaurants participating; he is and was not a co-host or sponsor of the event,” Jeanette Morelan, director of communicaitons for World Central Kitchen told DC on Heels in an email. “In light of the recently surfaced allegations, we are evaluating the restaurant’s participation to ensure that the focus is kept upon the intent of the fundraiser. Dine-N-Dash is not about any one restaurant but rather an event created to support World Central Kitchen’s humanitarian relief and empowerment projects around the world.”

Finally, Plum Relish, a woman-owned and operated catering service in D.C., has deleted the chef and his company from its website and social media. The company delivers bento-sized lunches boxes to offices from Founding Farmers, Succotash, Colada Shop and ChiKo. Catering by Mike Isabella had been one of Plum Relish’s “restaurant partners.”

What remains to be seen is if and for how long other associates such as the Marriott Marquis by the Walter E. Wahsngton Convention Center, Nationals Park, Reagan National Airport, The Wharf, Tysons Galleria and the Hotel at the University of Maryland — all of which have Isabella restaurants — will continue their partnerships with him. 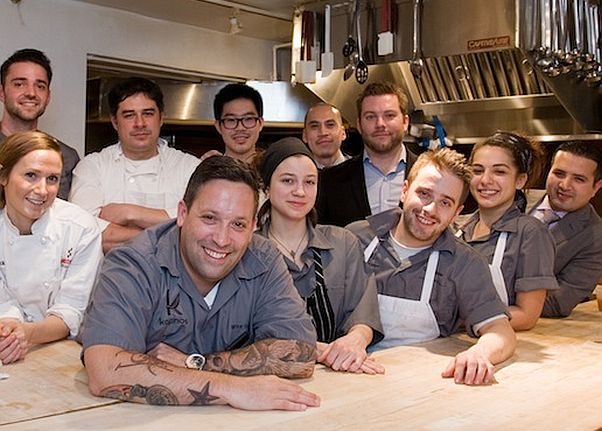 In addition to operations manager at Isabella Eatery in McLean, Caras had served as regional general manager for Pepita, Kapnos and Yona, all in Arlington, a manager at Graffiato in Chinatown; and helped open Requin at The Wharf in Southwest D.C.

The lawsuit, which seeks unspecified damages, claims the “all-male partners created a sexually hostile work environment and condoned a climate of contempt for women at MIC’s restaurants.” It also claims that Isabella allowed chefs to create a “bro culture” at the restaurants.

“MIC has not been able to retain the few women chefs it has hired and women generally do not make it into the higher management ranks of Mr. Isabella’s establishments,”the lawsuit says.

“When Caras did rise in the company, she was the target of extraordinary sex-based hostility and abuse,” the suit charges. During her three years at MIC, Caras says the defendants routinely subjected her to sexual harassment including unwelcome touching, sexual advances, vulgar and explicitly sexual gestures, sexists insults, texts calling her a “dumb bitch” and a “whore” and spreading malicious and false rumors about her sexual history and activities, including with Isabella and other male executives.

The suit also claims that Isabella sexually propositioned Caras and subjected her to degrading acts, including pulling her hair while standing behind her “in a clear pantomime of having penetrative sex from the rear.”

Isabella and his partners reportedly ogled and commented on female restaurant guests and bragged about sexual exploits with prostitutes, the lawsuit states.

In some behind-the-scene details that diners wouldn’t know, the suit claims Isabella instructed mangers to name signature cocktails after sexual conquests and other inside jokes. “The Crossing Guard” at G by Mike Isabella; “You Strong” at Kapnos Tavern; the “Unfaithful,” “Almost There” and “Fuzzy Pear” at Kapnos Kouzina; the “Eye Candy” at Kapnos Taverna; and the “You Have a Wife?” at Graffiato commemorate their sexual exploits with prostitutes in Europe. He also reportedly ordered Caras to name a signature cocktail at Pepita in Arlington “Itchy Kitty,” a name he used when referring to a woman’s vagina, although she refused.

The lawsuit depicts Isabella as routinely drinking “throughout the day at his restaurants, and his behavior while intoxicated was often belligerent, threatening and sexually inappropriate.” Once, the court documents say, he drunkenly leaned toward Caras and asked her to kiss him. “He touched other female employees in the same unwelcome manner.”

Moreover, “Isalbella grabbed and sexually propositioned female employees, promising to make at least one female chef whom he came onto sexually ‘a superstar someday,’” the lawsuit says. There are also reports of Isabella requiring his staff to accompany him to the Empire strip club in D.C.

Sara Hancock, who worked for Isabella as a pastry sous chef from July 2017 until February, told The Washington Post that Isabella kissed her cheek without consent in late December, exclaiming that he would make her a superstar. She described the workplace at Isabella Eatery in Tysons Galleria as “degrading” for women. She also showed the newspaper a text she sent her boyfriend on Dec. 31 about the unwanted kiss.

“It’s just not for me — to be treated in a way that feels like the workplace is a frat house,” she said in the interview. “The word ‘whore’ was used quite often in the kitchen, and I hated it.”

Cara’s lawsuit says that Isabella and the partners directed hiring officials to “hire women who were ‘hot’ or ‘good looking.’” Also, the partners bragged about “their sexual performance and regularly discussed ‘taking down’ or ‘banging’ women.” Nick Pagonis reportedly “boasted that he had a ‘huge’ penis and regularly remarked about how often he and his wife had sex.” Meanwhile brother George Pagonis “graphically described his girlfriend’s body and bragged about his sexual exploits.” 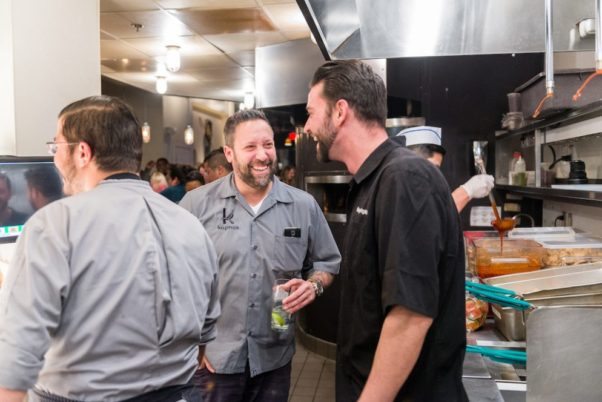 A particularly disturbing charge in the lawsuit is that Isabella and the partners referred to women they found attractive as “corn.” A term the lawsuit says “was a vulgar reference to a story Mr. Isabella regularly told about an MIC chef who commented that a woman was ‘so hot, [he’d] eat the corn out of her shit.’”

Caras claims Isabella fired her on Dec. 5 at Isabella Eatery Galleria “when a visibly intoxicated” Isabella suggested in front of her and other employees that a chef at the restaurant have sex with Caras. When she objected and attempted to leave, Isabella reportedly “chased after her, screaming that she was a ‘disrespectful bitch’ and acting in a manner she found frightening and physically menacing.” When she reached the door, the lawsuit claims, he said, “If you’re going to be disrespectful, then you’re done here” and told her not to return to the restaurant. As she left, he reportedly said “Love you, Chloe, nice working with you.”

Isabella and the others denied the charges through a statement from their attorney, Brian R. Begergman of Laurel, Md., sent to DC on Heels.

“The allegations of an unwelcoming or hostile work atmosphere at MIC are false,” the statement said. “After years of working for MIC and never before raising these allegations, in December of 2017, she stormed off the job and refused to return, insisting she had been fired. This was after she and Mr. Isabella became involved in a verbal argument at one of the restaurants.”

The statement added that the allegations come from only Caras, and are “supported only by several former employees, all of whom are also her friends.”

“In regards to the two allegations of physical contact, the allegation that Ms. Caras’ hair was pulled and a sexual act was simulated in her presence, and the allegation that Mr. Isabella gave an unwanted kiss to Ms. Hancock; MIC wants to make it very clear that these accusations are completely untrue,” the statement said.

It also claims that more than 60 percent of MIC’s top management and leadership personnel are women and that Caras engaged in the same banter, language and horseplay that she claims created the hostile working atmosphere.

“Harassment, discrimination, bullying, abuse or unequal treatment of any kind whatsoever are not tolerated at MIC,” the statement said. “MIC is prepared to litigate these issues in the public forum and to bring out all of the detailed text messages and communications, as Ms. Caras filed this lawsuit only after MIC refused to meet her financial demands over the course of the past several weeks.”