Sony Pictures’ family fantasy Jumanji: Welcome to the Jungle, in its fourth weekend of release and second weekend on top, led the box office with $35.18 million over the four-day Martin Luther King Jr. holiday weekend (Jan. 12-15). 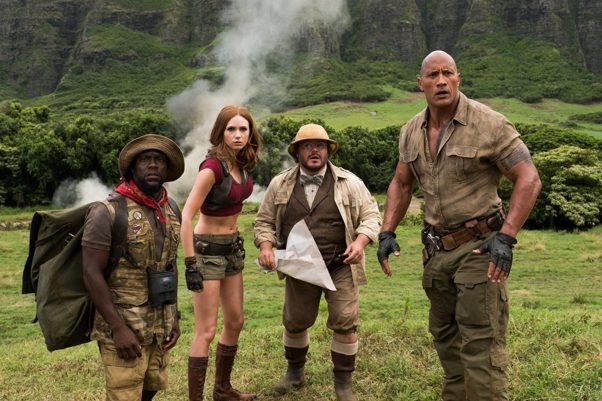 Jumanji: Welcome to the Jungle beat three new releases with $35.18 million to keep the lead another week. (Photo: Sony Pictures)

The sequel has earned $291.31 million through four weekends. It currently ranks as the eighth highest-grossing release of 2017, and at this pace it will easily surpass Thor: Ragnarok with $313 million, It with $327 million and Spider-Man: Homecoming with $334 million to finish in fifth place. It will likely to overtake fourth-place Guardians of the Galaxy Vol. 2, which earned $389 million, by the end of its run.

In its wide expansion, 20th Century Fox’s journalism drama The Post took in $23.06 million to finish in second place. That is a successful wide expansion after three weeks of limited release for the Steven Spielberg directed movie about the printing of the Pentagon Papers starring Meryl Streep and Tom Hanks.

In a surprise comeback with $16.18 million for third place was 20th Century Fox’s The Greatest Showman, which was down 9.5 percent in fourth place coming into the Monday holiday. But it demonstrated strong staying power in its fourth weekend of release, finishing up 17.5 percent. The Hugh Jackman musical finished the four-day weekend even higher than its $14.5 million projection, bringing its total so far to $98.93 million. The film has strongly benefitted from the hit soundtrack featuring songs by La La Land songwriters Benj Pasek and Justin Paul, which rose to No. 1 on the Billboard 200 last week.

The weekend also saw the debut of three new titles in wide release, with mixed results. Performing best was Lionsgate’s The Commuter, which finished in fourth place with $15.80 million for the four-day weekend. That compares favorably with star Liam Neeson’s last team-up with director Jaume Collet-Serra, Run All Night, which opened to $11 million back in March 2015. That said, it only made about half what Non-Stop, another collaboration between the star and director, did February 2014. That film debuted to $28.8 million on its way to a final domestic gross of $92.1 million.

Outside the Top 4, things got a little more complicated, as newcomers Paddington 2 from Warner Bros. Pictures and Proud Mary from Sony/Screen Gems were neck-and-neck with a number of holdovers going into Monday. When all was done, Paddington 2 finished in fifth place with $15.00 million while Proud Mary, which stars Taraji P. Henson as a hit woman working for an organized crime family in Boston, finished in a disappointing eighth place with $11.70 million over the long weekend. For Paddington 2, that represents a sharp drop from the first film, which grossed $25.4 million over the four-day MLK Jr. weekend in 2015.

Disney/Lucasfilm’s Star Wars: The Last Jedi finished in sixth over the four-day weekend after losing nearly 1,200 theaters, adding another $14.63 million. That brings total to $594.90 million since opening on Dec. 15. Look for the sequel to cross the $600 million mark by this coming weekend.

Coming in seventh with $14.35 million over the four days was Blumhouse Productions’ Insidious: The Last Key, which enjoyed a surprisingly robust $29.58 million opening last weekend. However, the horror sequel lost ground to The Greatest Showman and Star Wars: The Last Jedi on Monday and dropped from sixth place for the three-day weekend. That gives it $50.59 million in 10 days – almost as much as Insidious: Chapter 3 grossed over its entire run.

Rounding out the Top 10 over the four-day weekend were Universal Pictues’ Pitch Perfect 3 in ninth earning $7.33 million and Focus Features’ Darkest Hour, which banked $5.42. million. That brings their running totals to $96.33 million and $36.63 million, respectively.

The top 10 films last weekend earned $159.65 million over four days. That was 34.1 percent ahead of the same weekend last year, when Hidden Figures led with $20.85 million. However, it was down 10.3 percent from last week’s three-day weekend, which earned $144.17 million. Year-to-date, the box office is 7 percent ahead of last year.