Star Wars: The Last Jedi barely beat Jumanji: Welcome to the Jungle for the top spot at the box office during the hotly-contested four-day New Year’s weekend. 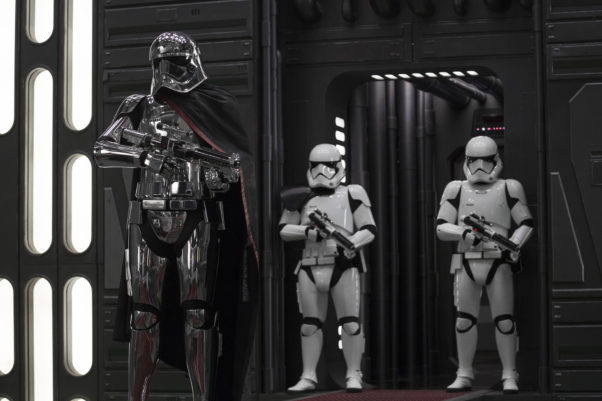 On Sunday, it appeared as if Jumanji would score an upset over Disney-Lucasfilm’s latest Star Wars installment, but following New Year’s Day, The Last Jedi won a third straight weekend atop the domestic box office with $66.81 million compared to Jumanji’s $66.27 million. That said, Sony Picture’s family-adventure sequel was the top movie in the country on Monday by a comfortable margin, taking in an estimated $16.22 million to The Last Jedi‘s $14.29 million.

The result was a definite win for Disney against a fierce competitor, though there was more than enough good news to go around. Sony took a risk by dusting off a 20-year-old property, banking on the drawing power of stars Dwayne Johnson and Kevin Hart and minting a rhino-sized hit in the process. Jumanji: Welcome to the Jungle has now grossed $185.22 million in its first 13 days, with much more to come as we head into January.

Star Wars: The Last Jedi is the top-grossing film of 2017 domestically, with its North American total standing at $531.51 million. The previous leader, Beauty and the Beast finished its run with $504 million. The Last Jedi topped the gross of its Disney stablemate in only 17 days.

Universal Pictures’ Pitch Perfect 3 finished the four-day weekend with $21.68 million in third place, giving the musical-comedy sequel a $68.17 million total after 11 days of release. Twentieth Century Fox’s The Greatest Showman finished in fourth place with $20.92 million, a 45.1 percent increase over the four-day Christmas weekend, bringing its total to $68.17 million through New Year’s Day.

In fifth place, 20th Century Fox’s Ferdinand posted a 46.7 percent increase over the four-day Christmas weekend, bringing in $14.85 million for a total of $57.01 million. Disney-Pixar’s Coco also took advantage of the school break, grossing another $10.08 million in sixth place for a total of $182.46 million after six weeks.

In seventh place, Sony-TriStar’s All the Money in the World took in a so-so $7.21 million in its second weekend for a $14.34 million total. Eighth place went to Focus Features’ Darkest Hour, which added 137 screens and brought in $7.01 million over the four-day weekend in 943 locations, bringing its total so far to $19.66 million.

In ninth place, Paramount Pictures’ Downsizing took in $6.2 million in its second weekend giving the Matt Damon comedy $18.71 million through New Year’s Day, a disappointment given the film’s reported $65 million budget. And in 10th place, Warner Bros. Pictures’ Father Figures took in $4.97 million for a $14.03 million gross after 11 days. Landing just outside the Top 10, Fox Searchlight’s The Shape of Water brought in $4.72 million on 756 screens, giving the Guillermo del Toro fantasy-romance $16.68 million so far

The top 10 films earned $226.04 million over the four-day holiday. That is 4.4 percent behind the four-day Christmas holiday weekend’s $235.56 million total. However, it was 2.6 percent ahead of the same 4-day weekend last year, when Rogue One: A Star Wars Story led for the third weekend with $65.52 million.