Bearnaise to Close on Capitol Hill on Sunday

Chef Spike Mendelsohn of We, The Pizza and Good Stuff Eatery fame, will close his French bistro Bearnaise, which opened in July 2013, after brunch on April 30 and replace it with a yet-unnamed taqueria by the end of June. 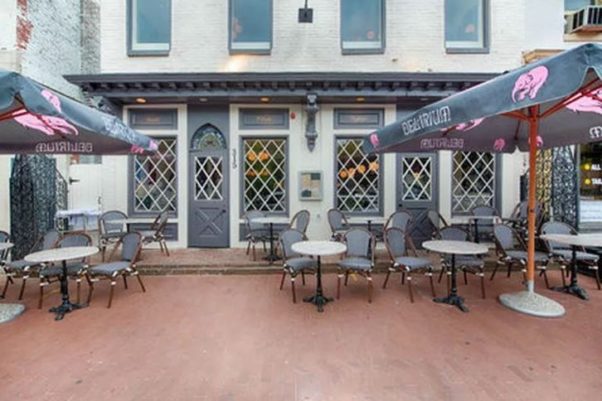 The restaurant at 315 Pennsylvania Ave. SE has gotten away from its original steak frites menu and now offers only an 8-ounce flat iron steak with unlimited fries, which was the cheapest of the original offerings. Gone are the 14-ounce ribeye and the 8-ounce filet. Also, only the béarnaise sauce remains on the menu with the spicy béarnaise, au poivre, bordelaise and maître d’ hotel butter just a memory. They’ve been replaced with tagliatelle pasta, fried chicken and fish.

“We try and serve what Americans love best in a hip atmosphere with fresh ingredients and [the taqueria] will be no different,” Spike’s sister and business partner, Micheline Mendelsohn, told Washingtonian magazine in an email.

She also said that Bearnaise will reopen in a downtown location that’s “more conducive to fine dining and parking” than its current location on Capitol Hill.

Executive chef Joe Palma will leave the kitchen at Bourbon Steak in the Four Seasons Hotel, 2800 Pennsylvania Ave. NW, on June 11. He is joining Mike Isabella Concepts as culinary director of Isabella Eatery, the 41,000-square-foot food hall slated to open at Tysons Galleria in the fall. 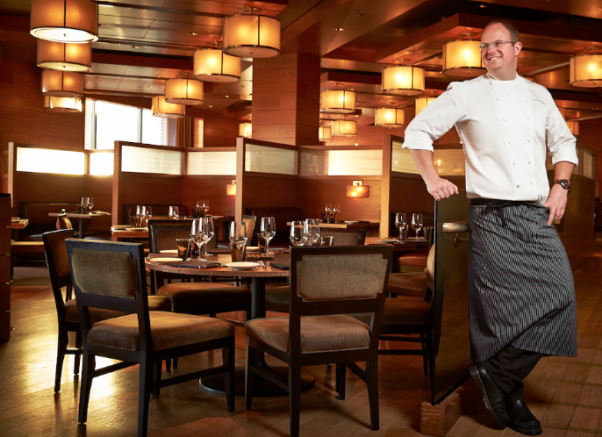 “Joe Palma brought talent, vision and strong leadership to Bourbon Steak, and we are deeply grateful for his contribution to the entire dining experience here,” said David Bernand, general manager of the Four Seasons, in a press release. “His commitment to lead his team to curate the largest steak program in the metropolitan area coupled with his to continuous striving to make each visit a memorable experience has taken us a cut above.”

A protégé of Frank Lee of Charleston, S.C., Palma has worked with Michel Richard at Citronelle, Yannick Cam at Le Paradou and Eric Ripert at Le Bernardin. Ripert tapped Palma to open his Westend Bistro at the Ritz-Carlton in D.C., where he made a name for himself creating elegant southern fare. Back in Charleston, worked at High Cotton before the Michael Mina Group lured him back to Bourbon Steak in May 2014. His replacement has not been named.

At the forthcoming Isabella Eatery, Palma will work on menu development, handle hiring and run the commissary kitchen that will feed the various restaurants in the dining hub.

“It’s very exciting to be able to do this while introducing such a new, immersive, and dynamic dining experience to the D.C. and Northern Virginia food scene,” Palma said in a statement.

Chick-fil-A to open May 24 in former Checkers location

The newest area Chick-fil-A will open May 24 at 1401 Maryland Ave. NE at the former Checkers location, according to the company’s website. This is a standalone store and will have a drive-through. 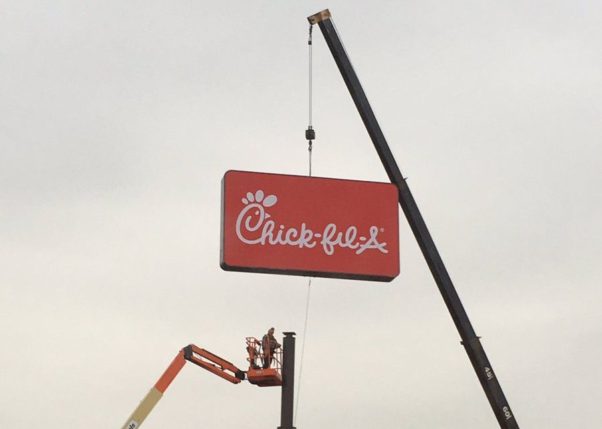 A crane lifts the Chick-fil-A sign onto the pole at the former Checkers location on Maryland Avenue. (Photo: chikfilaNEDC/Twitter)

The first 100 customers the day before will one Chick-fil-A sandwich meal – Chick-fil-A chicken sandwich, medium waffle fries and a medium drink — every week for the next year. Guests cannot camp out over night, but can begin lining up at 5:30 a.m.

Beginning at 9 a.m., the guests will go on a “road trip bus tour” to different spots around the city including. Participants will be “helping Chick-fil-A give back to the local community at stops along the way” including “a community center, a park, a landmark, a historic site and a bookstore” then return to the restaurant about 3 p.m. and the prizes will be given out about 4:30 p.m. Participants must travel on the bus, visit each stop and return to the restaurant on the bus, according to the company’s rules.

To be eligible for the giveaway, participants must be 18-years-old or older and live within a set of listed Zip Codes. 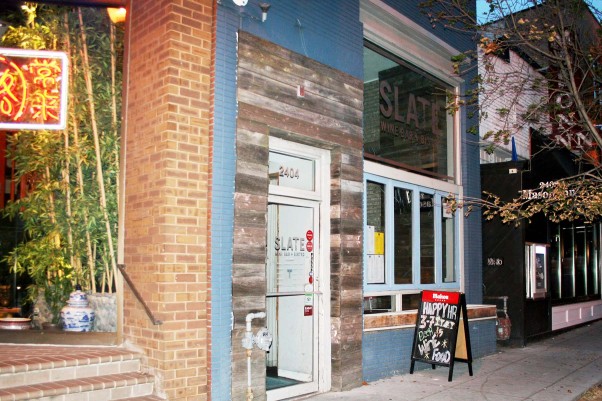 Guests can sample four European rosés for $15 or three American rosés for $16. Chef and sommelier Danny Lledo will be on hand to discuss the wines. 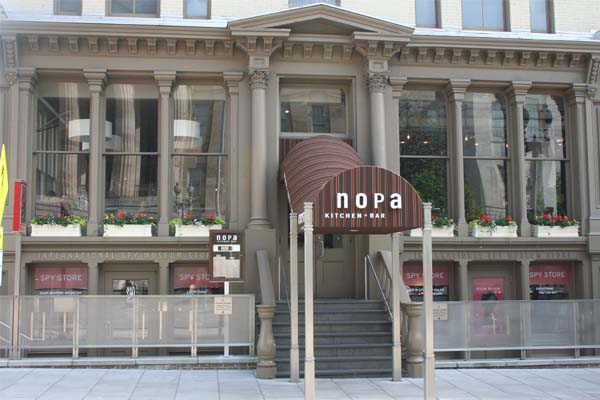 Nopa Kitchen + Bar is serving dinner for two for $70 on Fridays and Saturdays. (Mark Heckathorn/DC on Heels)

Arcadiana will hold a crawfish boil on its patrio from 2-5 p.m. Saturday. (Photo: Arcadiana)

Tickets are $65 per person and include all-you-can-eat spice-broiled crawfish, steamed gulf shrimp, house-made andouille sausage, gumbo, corn on the cob, fruit hand pies, pralines and more. Live music will be provided by a New Orleans-style jazz and Zydeco band. There will also be door prizes. A cash bar will be available with an array of choices and French Quarter-style cocktails.

Bastille, 606 N. Fayette St., Alexandria, is offering Sunday Sippers, a special wine list with bottles for only $20 available from 4-9 p.m. every Sunday.

Bastille will offer $20 bottles of wine from 4-9 p.m. every Sunday. (Photo: Bastille/Facebook)

Sunday dinners will feature Bastille’s April in Paris menu, which celebrates the people and cultures of France. A selection of a la carte dishes are available as well as a three-course or four-course bistro menu priced at $39 and $49, respectively. 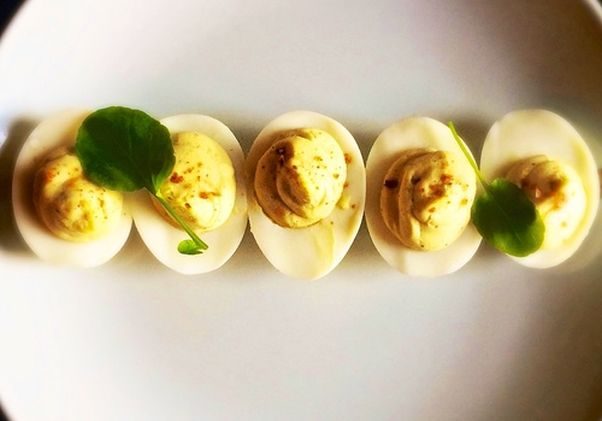 The 1970’s cocktail party will celebrate the life and career of barrier-breaker Moore with special episodes of her show, 70s-inspired cocktails and snacks.

Proceeds from the $5 cover charge will benefit Calvary Women’s Services in D.C.

There will be themed cocktails and punches at the cash bar. The limited a la carte 70s-inspired menu will include Chex mix, deviled eggs, tater tots with ranch dip, Jello cups with fruit salad, cocktail weenies, chips and dip and Salisbury steak with peas, carrots and mashed potatoes. The regular dinner menu will not be available.

Kevin Ettenson is the new chef at http://redstableva.com/ Red’s Table, 11150 South Lake Drive, Reston. He replaces Adam Stein, who left after 1 1/2 years to open The Eleanor, which will have four bowling lanes, a movie screen, stage, outdoor patio and 36 parking spaces.

Ettenson, 28, most recently work at the Sky Dome Lounge at the Crystal City DoubleTree hotel. Previously he worked at Sonoma, Acuri and Stanton and Greene in D.C. and began his career as a line cook at Mad Fox Brewery after working as a bartender and server at the brewpub. He also worked as a server at Clyde’s of Reston and Coastal Flats.

Ettenson plans to add build a larger aquaculture program at Red’s with more Chesapeake oysters to the menu, as well as local invasive species such as blue catfish, which is already on the menu, and snakehead. There will also be a bigger emphasis on house-made pasta with a veal and pork Bolognese with pappardelle on the way. He is also planning a late-night menu with simple finger foods.