12 Things to Do This Easter Weekend

Happy Easter! Sunday may be a holiday, but there is still plenty of activities to fill your weekend. It is the last weekend of the month-long National Cherry Blossom Festival with fireworks on Saturday night. There are even a few things on Sunday, including free admission to National Parks, if you want to get out after Easter dinner.

Metro begins SafeTrack Surge 14 this Saturday, closing the College Park and Greenbelt stations on the Green Line. Buses will replace trains Between Prince George’s Plaza and Greenbelt, but trains will operate on a regular weekend schedule of every 12-15 minutes between Branch Avenue and Prince George’s Plaza.. Red Line trains will single track between Medical Center and Grosvenor with trains running every 15 minutes between Shady Grove and Glenmont and every 8-10 minutes from 9 a.m.-9 p.m. between Silver Spring and Farragut North. Blue, Orange, Silver and Yellow Line trains will operate on regular weekend schedules. 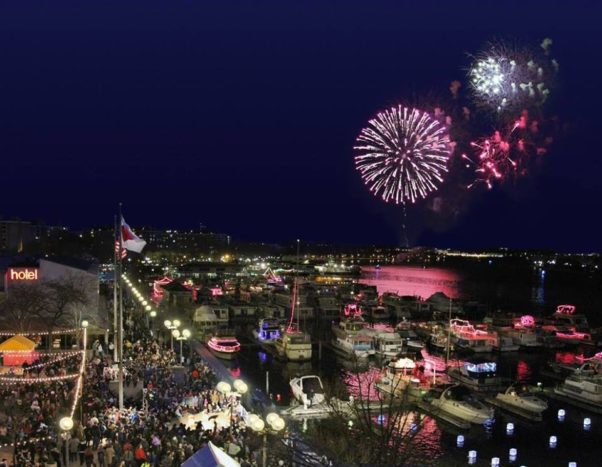 Music lovers, get ready for nearly eight straight hours of free tunes, all-ages activities and a beer garden capped off by fireworks at the Southwest Waterfront Fireworks Festival. Folks can stroll along the riverside for fresh seafood finds and stick around for one of the best vistas for firework watching. Entertainment begins at 2 p.m. and is capped off with fireworks at 8:30 p.m., weather permitting. There will be a Kirin and Strongbow beer and cider garden, product samples, face painting, cornhole, hands-on activities including koi windsocks and beaded bracelets, calligraphy, cotton candy, food trucks, costumed characters and live music including the JoGo Project, the Wil Gravatt Band, The Unknowns, Zodiak, Nen Daiko, Emma G and Dan Wolff and the Muddy Crows. 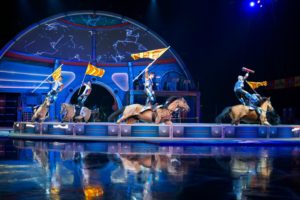 Time is running out! You only seven more performances to say goodbye to the Greatest Show on Earth in the DMV. The Ringling Bros. and Barnum & Bailey Circus packs up its tents permanently in May, and you only have until Sunday to see the actroatics, animals (but no elephants) and daredevils as the entire family joins the Circus Space Fleet, which brings performers back to Earth after a stint in outer space. You can also meet performers and watch animal training demonstrations free with your ticket one hour before the show. 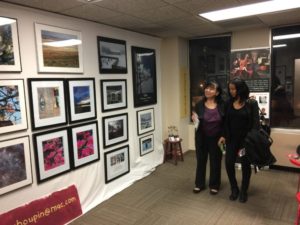 Artomatic continues its run this weekend in Crystal City near the Metro station in the building above the University of Phoenix and Synetic Theater and next to the Crystal City Marriott with more than 600 visual artists, musicians and performers. At this massive, unjuried showcase, you are sure to find something at the right price to hand on that bare wall in your home. Special events this weekend include a Clip N Sip Happy Hour from 5 p.m.-7 p.m. where participants can make their own cards and envelopes for Mothers’ Day, Fathers’ Day, birthdays, weddings or other special occasions while sipping on their favorite drink, an artist roundtable from 7-9 p.m. and a concert by Lunamvtic from 8-9 p.m. all on Friday; a sign-making workshop from 3-5 p.m., open drawing from 4-6 p.m. and a concert by Meatbot from 8-9 p.m. on Saturday; and Easter Fun Day on Sunday with Easter-themed craft projects and activities, a selfie photo shoot with the Artomatic Graffiti Bunnies, Easter egg decoration, Easter hats and bonnet crafts, a bunny hop parade and Easter portraits from 1-7 p.m. Sunday. 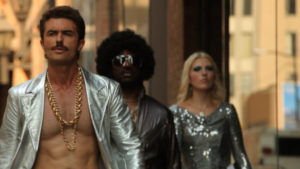 The Library of Congress will show The Secret Disco Revolution at 6:30 p.m. Friday. (Photo: Cave 7 Productions)

The Library of Congress celebrates disco culture in Bibliodiscotheque, a series that will run through May 6, capped off by a disco dance party that will feature the legendary Gloria Gaynor. Before then, enjoy a series of film screenings that will chronicle the immense influence of disco music, dance and fashion on modern pop culture. There will also be interviews (including one with Tim Gunn) and lectures throughout this nearly month-long showcase. This weekend features a film series with The Secret Disco Revolution and Donna Summer: Live and More…Encore on Friday evening and the complete British Queer As Folk series on Saturday. Upcoming films include Pump Up the Volume on Wednesday, You Got Served on April 28, Celia: The Queen and Dirty Dancing: Havana Nights on April 29, ABBA: The Movie on May 3 and House Party on May 8.

April 14 at 6:30 p.m. and April 15 from 10 a.m.-5 p.m. in the Library of Congress’ Mary Pickford Theater, James Madison Memorial Building, 101 Independence Ave. SE. Admission is FREE, but pre-registration is requested. 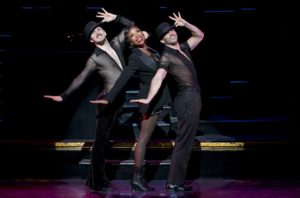 Singer Brandy starts in Chicago, which wraps up at the Kennedy Center this weekend. (Photo: Jeremy Daniel)

This is your last weekend to see Chicago, the longest-running American musical in Broadway’s decorated history starring singer Brandy at the Kennedy Center. Set amidst the razzle-dazzle decadence of the 1920s, Chicago has everything that makes Broadway great: a universal tale of fame, fortune and all that jazz… one show-stopping song after another… and the most astonishing dancing you’ve ever seen. It is the story of Roxie Hart, a housewife and nightclub dancer who maliciously murders her lover after he threatens to walk out on her. Desperate to avoid conviction, she dupes the public, the media and her rival cellmate Velma Kelly by hiring Chicago’s slickest criminal lawyer to transform her crime into a barrage of sensational headlines, the likes of which might just as easily be ripped from today’s tabloids. 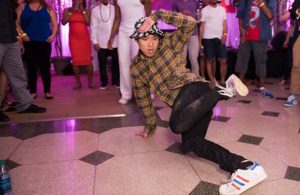 Cherry Blast! kicks off the finale weekend of the National Cherry Blossom Festival. Inspired by Japanese nightlife, it is a one-of-a-kind, multi-sensory in celebration of the annual blooming of the cherry blossoms. Dock 5 will be transformed into a Tokyo streetscape, highlighting Japan’s culture and ambiance guests will be immersed in a night market with a husting-bustling, communal marketplace lined with an array of food vendors including Erik Bruner-Yang of Maketto, Katsuya Fukushima of Daikaya, Tim Ma of Kyirisan, Seng Luangrath of Thip Khao, Huy Nguyen of Pho Wheels and Hiro Mitsui of Conbini by UZU, along with samples of Hibiki Japanese Whiskey, Suntori Wishky Toki, Kirin beer and sake; a music soundstage with live artists and DJ Mel performing all night long; an interactive art showcase of works created by D.C.-based artists and inspired by Japanese culture and the cherry blossoms including origami, screen printing and a sumo demonstration; and a video game arcade with 10 different stations of Nintendo and Sony. There will also be a VIP tea room featuring an open bar with special cocktail pairings from Gina Chersevani and food from Bruner-Yang for VIP ticket holders. 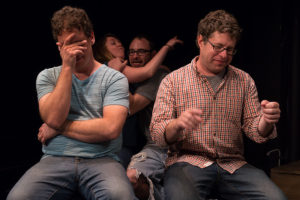 Washington Improv Theater hosts this annual elimination tournament, commonly known as FIST. Improv teams of up to four members perform, and the audience votes who moves on to the next round. On top of that, each match includes a headlining performance from improv veterans to cap things off. The 80 teams have been whittled down to the final eight, and a winner will be named at the 8 p.m. show on Saturday. 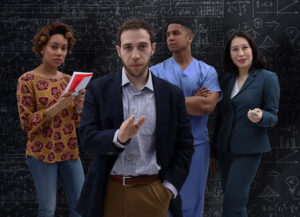 Smart People, a thought-provoking production that will have audiences pondering cultural and personal bias while laughing hysterically, opens Friday. It examines if our belief systems stem from our environment, or if some prejudices are hard-wired into us. Topics include the unavoidable nature of racism and other sticky subjects. The play features a doctor, an actress, a psychologist and a neurobiologist studying the human brain’s response to love, all looking for love, acceptance and identity in a complex world where political correctness comes face-to-face with cold hard data.

Admission to Great Falls along with other national parks across the country is free this weekend and next.
(Photo: Mark Heckathorn/DC on Heels)

April 14 and 15 and April 22 and 23 during regular park hours at at National Parks that normally charge an admission fee. Admission is FREE!

Pete Seeger and the Power of Song: Tribute to a Folk Legend 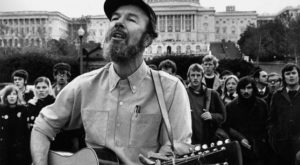 Pete Seeger performs at a protest in front of the U.S. Capitol.
(PHoto: Washington Post/Getty Images)

The late Pete Seeger will forever be an icon of folk music, laying the groundwork for such luminaries as Bob Dylan and John Prine. As a singer, folk-song collector, and songwriter, the Grammy winner spent a long career championing folk music as both a vital heritage and a catalyst for social change and remains an influential presence in the American folk music scene, even after his passing. He became a cultural hero through his outspoken commitment to the antiwar and civil rights struggles in the 1960s and for environmental and antiwar causes in the 1970s and beyond. He wrote a number of folk standards, including If I Had a Hammer (with Lee Hays), Where Have All the Flowers Gone? and Turn! Turn! Turn!—among many others. The Kennedy Center presents Pete Seeger and the Power of Song: Tribute to a Folk Legend that honors mim with this one-night-only concert. Notable artists will be on hand to celebrate Seeger’s legacy, including Rosanne Cash, John Leventhal, Judy Collins and Peter Yarrow and Noel Paul Stookey of Peter, Paul & Mary. 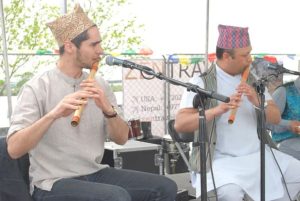 You don’t have to travel to Asia to get your hands on some quality Himalayan crafts. Experience Nepalese music, culture, food, art and more at the Global Nepal Fest. There will be traditional dance performances and live instrumental music along with vendors selling various products, arts and food from Nepal.

The National Gallery of Art will screen Nuts! on Sunday as part of an animation film festival. (Photo: Gland Power Films)

As part of Animator: International Animation Festival, the largest animated film festival in central Europe, which is held annually in Poznan, Poland, the National Gallery of Art is offering a taste of the festival with screenings. Sunday’s screening is Nuts!. A slick entrepreneur marketing himself as a doctor capable of curing countless ailments (including impotence) by implanting goat testicles, John Romulus Brinkley (1885–1942) rose to international renown in the 1920s and built his own eccentric empire. Using animated reenactments with illustrations drawn by different artists, mixed with archival and interview footage, this film whimsically follows Brinkley’s rise from abject poverty to the heights of American superstardom.