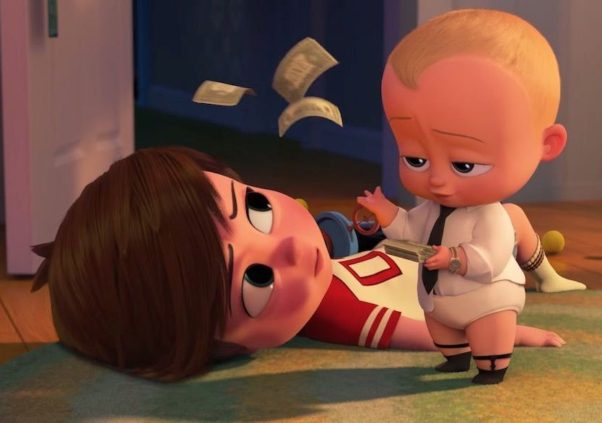 After a first place debut last weekend that took most analysts by surprise, the Alec Baldwin-led animated comedy The Boss Baby dropped 47.5 percent. While the release of fellow animated film Smurfs: The Lost Village may have produced a larger decline for The Boss Baby than would otherwise have occurred, it managed to hold on at the top. With $89.44 million total, it is running 6.1 percent behind the $95.2 million of Home and 0.7 percent ahead of the $88.8 million of The Croods through the same period.

The live-action remake of Beauty and the Beast starring Emma Watson fell 47.9 percent, less than The Boss Baby and just fell short of retaking the lead. With $430.95 million so far, the film not only extends its lead as the highest grossing Disney live-action remake, but comes just shy of two major milestones. One is reaching $1 billion worldwide; with $977.4 million globally, it is a feat likely to be achieved within the next few days. The other is becoming one of the top 100 domestic grossers of all time when adjusted for inflation. The film currently stands at No. 104, and appears likely to reach that top tier within the next few days as well.

Among the weekend’s debuts, Sony Pictures’ animated Smurfs: The Lost Village had the lowest opening weekend of the three Smurfs installments with $13.21 million and third place. The third animated Smurfs installment — starring the voices of Demi Lovato, Jack McBreyer and Mandy Patinkin — saw a lower opening weekend than the previous two installments: 24.5 percent behind the $17.5 million start of The Smurfs 2 and 62.9 percent below the $35.6 million debut of The Smurfs.

This installment may have been hurt by an April release date, instead of the July release date of the previous two films. Unless it holds up far better than anybody expects, Smurfs: The Lost Village will almost definitely end up as the lowest-grossing film domestically of the three. That seems likely to kill any chance of another sequel, especially considering the film’s lackluster $42.1 million overseas gross so far compared to the previous two installments.

Warner Bros. Pictures’ Going in Style started in fourth with a decent if slightly lackluster $11.93 million. The action comedy remake starring Morgan Freeman, Michael Caine and Alan Arkin starts 26.8 percent behind the $16.3 million debut of 2013’s Last Vegas and 45.7 percent behind the $22.0 million opening of 2014’s The Monuments Men.

With those numbers, it seems unlikely to match Last Vegas‘s $63.9 million total, and almost certain not to match the $92.5 million inflation-adjusted total of the original 1979 Going in Style.

Opening in 10th place was Pure Flix’s faith-based The Case for Christ with $3.97 million. That is notably higher than the debits for the studio’s two previous releases, Hillsong – Let Hope Rise with $1.3 million and I’m Not Ashamed with $927,000.

Sony’s Passengers crossed the $100 million mark domestically after 110 days of release, marking the longest such climb to the nine-digit revenue threshold since 2005’s Million Dollar Baby.