DreamWorks Animation’s and 20th Century Fox’s The Boss Baby unexpectedly took first place in a shocking victory over the weekend (March 31-April 2) with $50.20 million. The animated comedy was expected to finish second. In the process, it dethroned Beauty and the Beast, which was widely expected to lead for a third straight weekend, but instead took second with a 49.8 percent drop to $45.42 million. 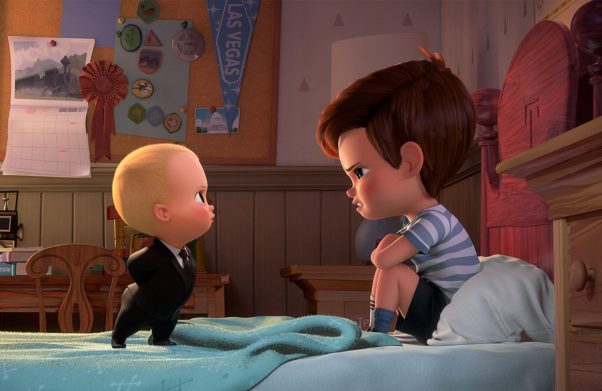 The Boss Baby took first place in theaters over the weekend with $50.20 million, beating Beauty and the Beast.
(Photo: DreamWorks Animation)

Starring Alec Baldwin as the voice of an infant who speaks English and doubles as a CEO, the highest that anyone expected from The Boss Baby was $48 million. Most projections were somewhere around $30 million or so, quite a bit behind the holdover projections for Beauty and the Beast, but The Boss Baby overtook its competition on the strength of its strong marketing campaign.

Compared to other animated titles released around the same time of year, The Boss Baby started higher than most similar titles: 55.9 percent ahead of the $32.2 million opening of Mr. Peabody & Sherman, 27.7 percent above the $39.3 million debut of Rio 2 and 15.1 percent above the $43.6 million start of The Croods. However, it did start 3.6 percent below the $52.1 million opening of Home.

The film almost everybody thought would three-peat at the top, Walt Disney Studios’ Beauty and the Beast, was knocked off its perch and fell to second place. It dropped 49.8 percent to $45.42 million, which was about what most analysts had predicted considering its nearly-equal 48.3 percent slip the weekend before. The problem is that almost nobody foresaw The Boss Baby’s surge to beat it at the box office.

With $393.34 million earned thus far, Beauty and the Beast is not only the highest grossing film of the year, but last weekend it also surpassed the $364.0 million lifetime total of The Jungle Book. That film had previously been the highest grossing among the several live-action remakes of animated Disney classics that the studio released during the past few years.

Paramount Pictures’ and DreamWorks’ Ghost in the Shell under-performed with $18.68 million and third place. The science-fiction action film, which stars Scarlett Johansson as a cyber-enhanced humanoid and based on the comic by Shirow Masamune, was expected to earn somewhere around the mid-to-high $20s. Instead, it was unable to overcome the limited fame of the source material and audience fatigue after a month of more successful male-aimed action films including Logan, Kong: Skull Island and Power Rangers, which finished sixth, fifth and fourth, respectively.

Ghost in the Shell debuted lower than almost every other comparable sci-fi film of the past few years: 57.4 percent below the $43.8 million opening of fellow Johansson sci-fi movie Lucy, 49.5 percent below the $37.0 million opening of Oblivion, 37.3 percent behind the $29.8 million start of Elysium and 34.9 percent behind the $28.7 million debut of Edge of Tomorrow. It even came in under the opening weekends of such sci-fi box office disappointments as After Earth and Ender’s Game.

Focus Features’ The Zookeeper’s Wife cracked the top 10 despite only opening in limited release at 561 theaters, about 1,500 fewer theaters than any other movie in the top tier. The drama starring Jessica Chastain as an animal saver in Nazi-era Germany started with $3.29 million in10th place.