There’s something for everyone in the DMV this weekend. From green beer for the Irish or Irish at heart, to environmental films, to animated Japanese films, to Japanese cinema and a 20th birthday bash for the Kennedy Center’s Millennium Stage. Chances are there won’t be many cherry blossoms to see this spring, but there’s still other things to fill your weekends.

Metro’s SafeTrack Surge 13 continues with Blue Line trains single tracking every 24 minutes between Braddock Road and Van Dorn Street and buses replacing trains between King Street, Van Dorn Street and Franconia-Springfield from 10 p.m. until closing Saturday. Yellow Line trains will single track between Braddock Road and Huntington with trains running every 24 between Huntington and Mount Vernon Square ONLY. Additional trains will run between National Airport and Mount Vernon Square and buses will replace trains between King Street, Eisenhower Avenue and Huntington from 10 p.m.-closing on Saturday. The Greenbelt station will be closed Saturday and Sunday with buses replacing trains between College Park and Greenbelt. The rest on the Green Line from College Park to Branch Avenue will operate on a regular weekend schedule. Red, Orange and Silver Line trains will run on a regular weekend schedule with Red Line trains single tracking between Farragut North and Dupont Circle. 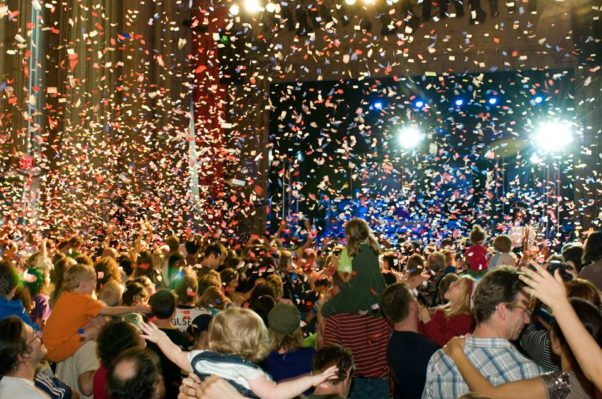 For 20 years, the Kennedy Center’s Millennium Stage has been featuring a variety of performers – classical ensembles, world music groups, ballet troupes, hip-hop artists, jazz quartets and tap dancers — without charging a cent. The stage has presented a free show at 6 p.m. nightly, 365 days a year since 1997, the year the first Harry Potter book was published, the year Steve Jobs returned to Apple and the year The English Patient won the Oscar for Best Picture. That is 7,300 shows with more than 60,000 artists. Celebrate the milestone anniversary with this Sunday night show. Scythian will play its intriguing blend of Celtic, Eastern European and Appalachian music, which could have you dancing in the aisles, from 6-7 p.m. Then Big Sam’s Funky Nation will round out the evening from 7-8 p.m. with groovy urban funk. The first 1,000 fans get a free t-shrt and ticket giveaways will be open until 8 p.m. All beer and wine will be half price during happy hour from 5-6 p.m. at the Grand Foyer bars.

Jeff Sheng’s more than 200 photos of GLBTQ athletes and their stories wraps up this weekend at the Kennedy Center.
(Photo: Kennedy Center)

This is the final weekend to see Jeff Sheng’s Fearless Project, which features photos of more than 200 LGBTQ student athletes in the United States and Canada and some of their stories. It has drawn great acclaim, and many of the images have been featured in the New York Times Magazine, Time Magazine and Newsweek. Since 2003, Sheng has photographed more than 200 “out” athletes, and he has spoken about and exhibited the Fearless Project at more than 70 different venues, including dozens of college campuses as well as the headquarters of ESPN, Nike and the NCAA.

Through March 19 from 10 a.m.-closing in the Hall of Nations at The John F. Kennedy Center for the Performing Arts, 2700 F St. NW. Admission is FREE! 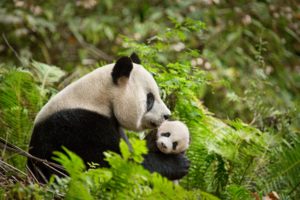 The Environmental Film fest will screen Disneynature’s upcoming Born in China at 1 p.m. Sunday at the National Museum of American History. (Photo: Disney)

The longest-running and largest environmental film festival in the U.S., the Environmental Film Festival celebrates its 25th year of enlightening viewers on the state of our environment, and what we can do to maintain its health. More than 170 fun and sometimes serious movies will be screened at more than 50 venues all over the DMV. The festival will also include informative discussions and social events that will inspire dialogue surrounding the films and their themes. This weekend’s highlight is a free screening of Disneynature’s upcoming Born in China at 1 p.m. Sunday at the National Museum of American History narrated by The Office’s John Krasinski. It follows the adventures of the giant panda, the golden monkey and the elusive snow leopard. Check the website for a full schedule. 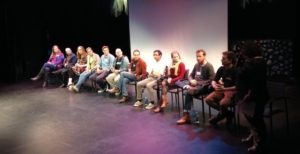 The Bethesda Film Fest will feature five documentaries made by local filmmakers on Friday and Saturday.
(Photo: Bethesda Urban Partnership)

The fifth annual Bethesda Film Fest features five short documentaries made by local filmmakers. The same five films — Charlie & Sam, The Culture of Collards, Encaustic, Frogman and The Sandman — have wide-ranging subjects: One film is about a 97-year-old WWII veteran who visits a comrade in arms he hasn’t seen since the end of the war; another is about a doctor who helps the state of Georgia execute inmates; another is about collard greens. All five films will be presented together at three different screenings. 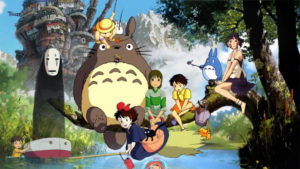 My Neighbor Toturo will be include in area Landmark theatres’ Studio Ghibili series on weekends. (Photo: Studio Ghibli)

Landmark Theatres’ annual Studio Ghibili series is back! On weekends, you can see the Japanese animated film studio’s big hits like Spirited Away, The Wind Rises and My Neighbor Totoro along with lesser-known films including Nausicaa of the Valley of the Wind and Only Yesterday. With two execptions (Totoro and Kiki’s Delivery Service), the movies will be screened in Japanese with English subtitles. The films are running on different schedules at Landmark’s E Street Cinema, Bethesda Row Cinema and West End Cinema. Click on each theater to see its schedule. 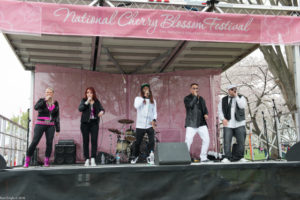 The National Cherry Blossom Festival, D.C.’s world famous springtime celebration in honor of Japan’s gift of cherry trees, returns for 2017, with peak bloom predicted to arrive somewhere between March 19-22 although up to 90 percent could have been damaged from the below-freezing temperatures this week. The Tidal Basin will feature a welcome area and a performance stage beginning Saturday and continuing through April 2 with hands-on activities, ranger-led programs, concessions and free performances. Besides the blooming of beautiful petals, the festival is packed with signature events, including the opening ceremony on March 25, the Blossom Kite Festival on April 1, the National Cherry Blossom Festival Parade on April 8 and the Southwest Waterfront Fireworks Festival on April 15.

March 18 through April 2 from 10 a.m.-7 p.m. Monday through Saturday and noon-6 p.m. Sundays at the Tidal Basin. Admission is FREE!

Grug and the Rainbow

Grug is a treetop who goes looking for a rainbow at the Kennedy Center’s Family Theatre this weekend. (Photo: Wndmill Theatre)

Based on a much-loved picture book, Grug and the Rainbow from Australia’s Windmill Theatre is a puppet lover’s dream. Intended for everyone ages two and above, follow the tale of Grug, who began his life as the grassy top of a Burrawang tree and fascinated by the world around him, solving everyday problems with creativity and joy. In this whimsical tale, Grug goes on an epic adventure to find a rainbow. Though its spectacular hues seem always just beyond his grasp, he is full of determination and ever ready for whatever surprises come his way in this 35-minute production. Kids will love the tender storytelling, while adults can marvel at the creativity on display. 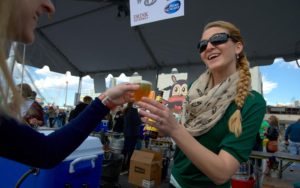 Capitol Riverfront’s Yards Park will be shrouded in green for the Clover Beer Fest. Expect Irish beers and ciders to go along with tasty brats and blaring bagpipes. Tastings of more than 100 beers will be offered and many D.C. food trucks including Arepa Zone, Big Cheese, Dirty South Deli, Fat Pete’s Barbecue, Pittsburgh Rick’s, Sloppy Mama’s Barbeque, Swizzler and Urban Poutine will be on-site. Your general admission ticket gets you unlimited full pours of green beer, cider and stout, an entry into Boozy Bingo, tokens good for 10 4-ounce pour of more the craft beers and ciders, lawn games and much more. 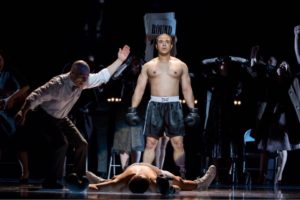 The final performance of Champion by the Washington National Opera is at 7 p.m. on Saturday at the Kennedy Center.
(Photo: Kennedy Center)

This is the final weekend for the Washington National Opera’s Champion. Featuring music by Terence Blanchard, a five-time Grammy-winning jazz composer, the production dives into the life of Emile Griffith, a closeted gay welterweight boxer who knocked out a homophobic rival in the early 1960s. However, his win led to unexpected tragedy, and now, Emile finds himself reflecting on a life filled with guilt and denial. Told through flashback, Champion uses a stunning mix of musical styles to convey Emile in his quest to find his true self. 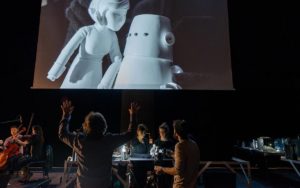 Nufonia Must Fallcombines puppetry, video capture and projection. and music performed on more than 20 small stages and projected onto a big screen at Lisner Auditorium at 8 p.m. Saturday.
(Photo: Afiara Quartet)

Nufonia Must Fall is the story of an aging, nearly obsolete droid, T4, who falls in love with a human, Malorie, as a graphic novel in 2003. Created by DJ Kid Koala, the stage performance, directed by K.K. Barrett, combines puppetry, video capture and projection and music performed by the DJ and the Afiara string quartet with electric ukulele, turntables, percussion and sound effects on more than 20 small sets. 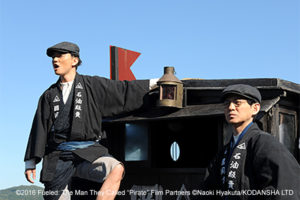 This is the fourth year of CineMatsuri, D.C.s Japanese film festival. Organized by the Japan-America Society of Washington D.C., the festival showcases five of Japan’s most recent and best films, each in a different genre, reflecting the richness and diversity of today’s Japanese cinema. All movies are shown in Japanese with English subtitles. Sunday’s screening at 2 p.m. is Kaizoku to Yobareta Otoko (Fueled: The Man They Called “Pirate”), by Naoki Hyakuta. The film is based on the true-life story of Sazo Idemitsu, the founder of Idemitsu Kosan, one of Japan’s major corporations. The film’s protagonist, Tetsuzo Kunioka, is the owner of a small local oil company in pre-war Japan. Through sheer determination, he develops his company into a national player. Following Japan’s defeat in World War II, Kunioka is determined to rebuild his company, and he takes on not only the Japanese oil cartel but also the major international oil companies. Other films include Tsukiji Wonderland on Monday, Nagai Iiwake (The Long Excuse on Tuesday, Satoshi No Seishun (Satoshi: A Movie for Tomorrow) on Wednesday, Yu Wo Wasasuhodo No Atsui Al (Her Love Boils Bathwater on Thursday and a screening of eight short films on March 30.