Lucky Strike opened its second DMV location on Saturday in the Westfield Montgomery Mall, 7101 Democracy Blvd., Bethesda. It is located on the lower level of the mall under the food court in space that used to house The Movies at Montgomery Mall theater, which closed in 2014, just inside the Macy’s parking garage entrance. 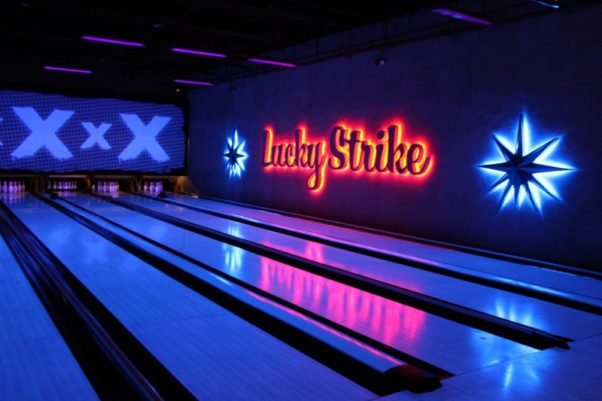 Lucky Strike opened March 4 on the lower level of the Westfield Montgomery Mall with 12 lanes and a new gastropub menu.
(Photo: Mark Heckathorn/DC on Heels)

Lucky Strike opened its first area location in Gallery Place in November 2005. The new location is slightly smaller, with 12 lanes instead of 14. Bethesda seats about 110, while D.C. seats about 125. The Chinatown also has three pool tables and 10 projection screens at the ends of the bowling lanes, which Bethesda doesn’t have.

Instead, the new location is the prototype for future Lucky Strike locations including Honolulu and Boston, which will also have large electronic game rooms that wouldn’t fit in Bethesda. The design puts greater emphasis on the restaurant, which is now up front, and has two communal tables that seat 28 people each and an open kitchen with a brick oven. There are 24 60-inch flat screen TVs, including one at each lane that allows bowlers to choose what they watch and a new gastropub menu that features new dishes, 16 craft beers on tap, including Denizens, Jailbreak, Evolution, Union and Heavy Seas, and Victorian-inspired cocktails.

“We expect people who never pick up a bowling ball to come here for dinner or a drink,” CEO Steven Foster told DC on Heels on Friday. Foster was in town for the grand opening. “We wanted to create a warm and cozy food-oriented place to go.”

Foster, who opened the first Lucky Strike in Hollywood in 2003 with the original décor and lanes from Hollywood Star Lanes — the set used in the Coen Brothers’ The Big Lebowski movie — said he decided to open a second DMV location in Bethesda because the area is underserved. “There are a lot of intellectual people here with not a lot to do,” he said.

In upcoming months, Lucky Strike plans to install four brew tanks on the patio, which will brew four of the restaurant’s own beers each season.

Guests at the bar or in the dining room may never even know there are bowling allies in back, since the allies are out of sight on the other side of the bar and the space was designed to keep the noise from filtering into the dining room to a minimum. 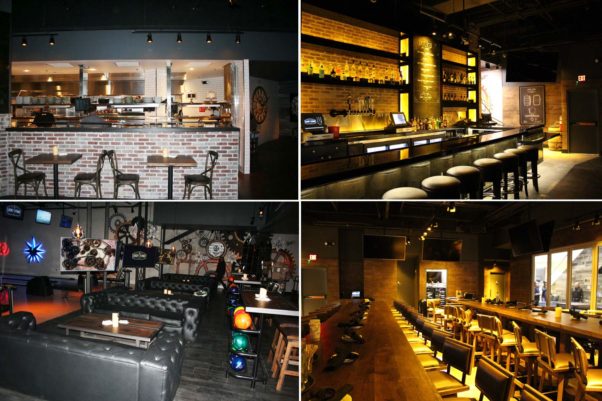 The dining room features whitewashed wood and exposed brick walls, dark faux wood floors and a mix of dark wood tables with chairs and brown leather booths in addition to the two communal tables lined with bar stools. There are several flat screens throughout that show both still and video artwork curated especially for Lucky Strike from local and global artists.

Up a few steps on the other side of the back bar wall are the bowling alleys that feature bookshelves filled with books that customers are welcome to read. There are also table games like backgammon and chess. This upscale bowling alley has replaced the plastic chairs with tufted black leather couches, dark wooden coffee tables and leather armchairs. The lanes, which can be sectioned off with drapes for private events, are lit with black lights that make the fluorescent balls and pins glow. Scoring is automatic and bumpers can be turned on or off for individual players.

While the D.C. menu is more bar focused with small plates, wings, flatbreads, fries, tacos, sandwiches and burgers, corporate chef Robert Willett told DC on Heels the Bethesda menu is more “food forward.” More food is being made from scratch in-house and ingredients are being locally sourced as much as possible. Bread is being made at local bakeries and meat and seafood are from local suppliers.

The new gastropub menu offers a variety of American-comfort dishes and appetizers. Bethesda is the only location serving Maryland crab cakes (one for $15 or two for $26), brick-over baked crab and artichoke dip ($10), crab chowder with crab, potatoes and corn ($9) and jumbo lump crab pizza with creamy crab alfredo, spinach, artichoke, shaved red onions, a four-cheese blend and jumbo lump crab meat ($16). It is also the only Lucky Strick to serve Smith Island cake for dessert. 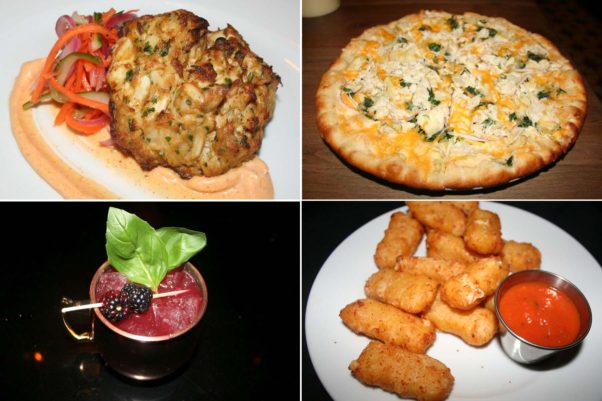 While the full menu is available in both the dining room and bowling alley, don’t worry if you crave those traditional bowling foods like (twice-fried) Belgian fries, soft pretzel sticks with beer cheese, tater tots, onion rings or wings. They are still on the menu along with more upscale starters and shared plates like truffle deviled eggs, bacon-wrapped shrimp and chicken bites. Also on the menu are roasted meatballs, crispy tempura Portobello mushroom fries, angry shrimp, mac & cheese bites and crispy Wisconsin cheese curds. The starters and shared plates are priced from $6-%c15. There are also four sushi rolls including spicy tuna, California, veggie and kingpin (tuna topped with salmon) priced from $6-$9.