Ren’s Ramen, 11403 Amherst Ave., Silver Spring, isn’t much too look at. It is a tiny hole-in-the-wall restaurant a few blocks off Georgia Avenue, but the ramen served there packs big flavor. 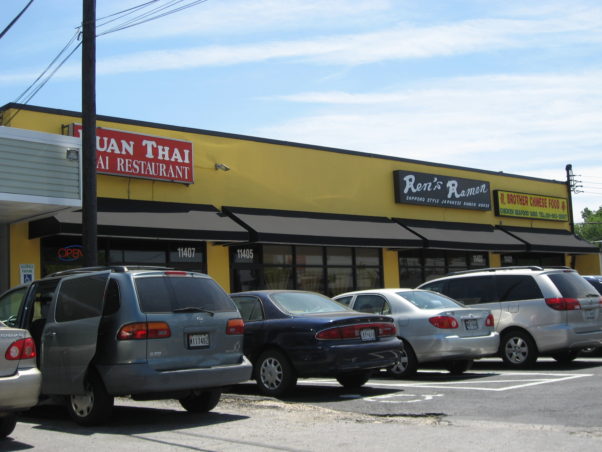 Ren’s Ramen is located in a strip mall in Wheaton, a few blocks off Georgia Avenue. (Photo: eatinwheaton)

Ren’s uses wavy noodles of medium thickness imported from Nishiyama Noodles in Sapporo, Hokkaido, in its ramen. The restaurant then ages the noodles at specific temperatures and humidity to bring out their best flavor and texture.

Ramen is a wheat noodle made with kansui, a type of alkaline mineral water. The restaurant serves “Sapporo Style” ramen topped with a slice of roast pork, bean sprouts, bamboo shoots, scallions, onions, garlic and ground pork (except the vegetarian version). Traditionally eaten as a snack between meals or late at night, ramen has become popular in the DMV, similar to Vietnamese pho. 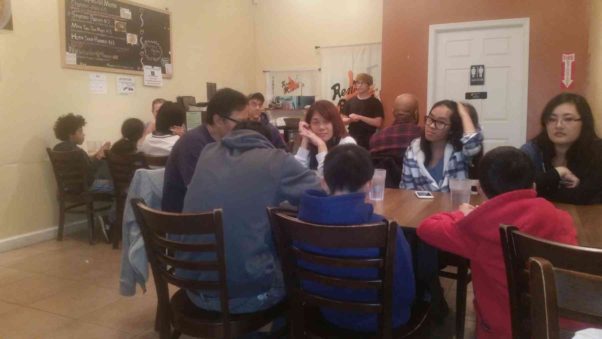 Ren’s Ramen is tiny with only 27 seats. (Photo: Mark Heckathorn/DC on Heels)

Ren’s heats oil flavored with roasted garlic and onion and stir-fries grated garlic and ground pork. Then flavor concentrate is added — miso flavored with soybean paste, salt or soy sauce — along with spices and “tonkotsu” pork broth to add more depth and body. Miso and salt vegetable ramen is made with seaweed broth and filled with cabbage, carrots, bean sprouts, seaweed, scallions and onion. Regular ramen is $11 for a large bowl, while vegetarian is $12. There are also often specials that aren’t on the menu, but posted on a chalkboard or signs around the restaurant such as hot and sour ramen or stamina ramen.

Diners can add 50 percent more noodles for $2 or double the noodles for $4. Extra toppings, priced from 50 cents to $3.50, can also be added including roast pork, pork belly, boiled eggs, seaweed and butter. Side dishes including gyoza (dumplings with pork filling), fried rice or white rice are also available priced from $2-$7. 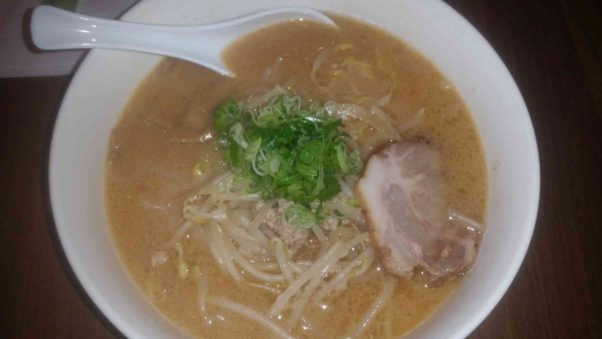 The miso ramen was filling and hit the spot on a chilly Sunday afternoon. (Photo: Mark Heckathorn/DC on Heels)

On a recent chilly Sunday after a shopping excursion to Wheaton Plaza and while fighting a cold, I walked the four blocks to Ren’s for a bowl of hot soup. The restaurant is tiny — just 11 two-seat tables that can be pushed together for larger parties and a counter with five chairs. Be prepared to wait outside for a table, since there isn’t any waiting area inside. Also, take cash since the restaurant doesn’t accept credit cards.

I ordered the Sapporo-style miso ramen since I’m a fan of miso soup. This was some of the best ramen I have ever tasted. I like it better than Daikaya since it had more depth of flavor and the pork was much leaner. I also liked the good size portion of ground pork that was in the soup. It was also more comfortable with individual chairs that had backs on them and were moveable rather than stools affixed to the floor at the communal table at Daikaya. Also, despite the small size of the dining room, the noise level was much better at Ren’s then Daikaya, where is often hard to hear your dining partner. 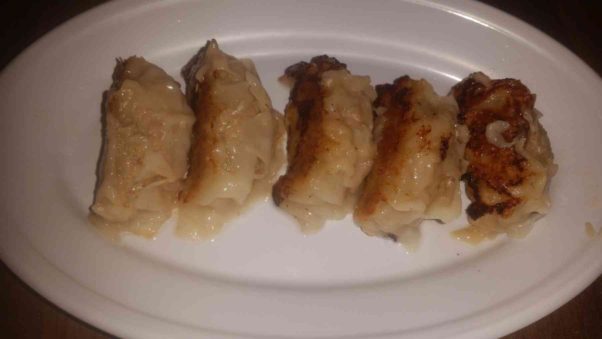 The gyoza — fried pork dumplings — weren’t as tasty as the ramen. (Photo: Mark Heckathorn/DC on Heels)

However, Ren’s gyoza were disappointing. The fried dumplings were tiny, unlike traditional Chinese dumplings. The wrapper was very thin and tasteless, and the filling need more seasoning. Also, the sauce tasted like pure soy sauce, which was way too salty and overpowered the dumplings’ flavor, rather than the mixture of soy sauce, garlic, scallions and other ingredients usually served with Chinese dumplings. Also, beverage options are limited with the restaurant only serving Coke, Diet Coke, ginger ale, water, bottled green tea or original and peach Ramune, the carbonated Japanese soft drink.

The restaurant was full the entire time I dined, and is definitely worth a trip to Wheaton now that the weather has gotten colder. Next time you are in the mood for some hot soup, head out to Ren’s.