Eat and Drink Your Way Around the DMV

It’s going to be a great fall weekend to get out and eat (and drink) your way around the DMV. Start with drinks tonight at the D.C. Library’s Uncensored: The Cocktail Party and fill up on Saturday at Del Rey’s Art on the Avenue, Taste of Georgetown or Taste of Bethesda. Then drink some more on the Bikes and Brews Brewery Tour, Capitol City Brewing’s Mid-Atlantic Oktoberfest or any of the final D.C. Beer Week events. On Sunday, fill up on Russian food at St. John the Baptist’s Russian Bazaar. 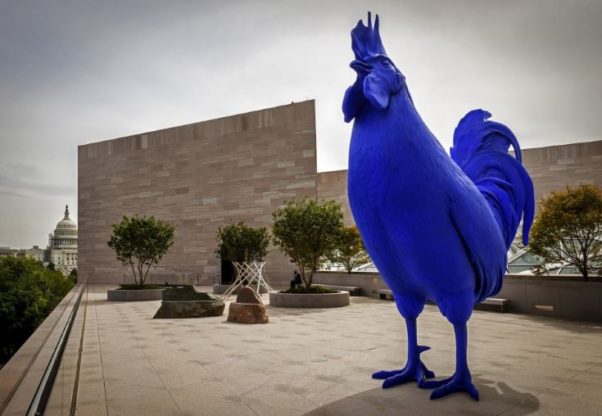 There is more than one museum opening in D.C. this month, although this one is technically reopening. Under wraps for nearly three years while undergoing an expensive renovation, the National Gallery of Art’s remodeled East Building features more than 12,000 square feet of new gallery space and a rooftop sculpture garden, featuring Katharina Fritsch’s Hahn/Cock, a giant blue rooster. Opening exhibitions will include In the Tower: Barbara Kruger in the southwest Tower Gallery, featuring images superimposed with Kruger’s phrases. Pianist Vicki Chow will perform at 12:30 on Friday. At 4 p.m. on Saturday, Yves Klein’s Symphonie – Monotone-Silence, a 20-minute D major chord, will be performed by an orchestra and chorus, followed by 0 minutes of silence. And at 2 p.m. on Sunday, composer Philip Glass will perform and discuss his creative process.

Sept. 30 at 10 a.m. at the National Gallery of Art’s East Building, Fourth Street and Pennsylvania Avenue NW. Admssion is FREE!

Glow in the Garden 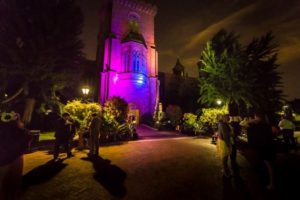 The Enid A. Haupt Garden and Smithsonian Castle light up tonight for the Glow in the Garden party. (Photo: Kate Warren)

Glow in the Garden isn’t just any old garden party. It is the Smithsonian at 8’s annual affair in the Enid A. Haupt Garden and the 161-year-old Smithsonian Castle. Gather under the new moon to celebrate all things that light up the dark with the historic towers silhouetted against the night sky and the Victorian-style garden aglow. It turns the quiet garden into an illuminated party space strolling performers, music by DJ Trayz and DJ Smudge inside and out, trivia contest, a GIF photo booth, cash bar and more. 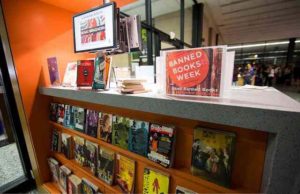 Uncensored: The Cocktail Party is the D.C. Public Library Foundation’s fundraiser capping the annual Banned Books Week celebration. The party features literary-themed cocktails created by mixologists from some of Washington’s best bars, including 2 Birds 1 Stone, the Columbia Room and Petworth Citizen. There also will be food from Mess Hall, beer from D.C. Brau, music from Chain and the Gang, DJ Ayes Cold and the Feedel Band, and an art exhibition by Adrienne Gaither. 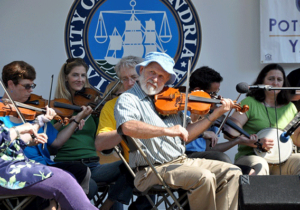 Alexandria Live Music Week features more than 200 performances at 60 venues around the city. (Photo: Art on the Avenue)

Alexandria Live Music Week returns for a second year, featuring more than 200 performances of all types at more than 60 venues throughout the city. Highlights this weekend include the Free Flowing Musical Experience at 9 p.m. on Friday at King Street Blues; an all-day jam session, with more than 20 acts on five stages at Art on the Avenue in Del Ray from 10 a.m.-6 p.m. on Saturday; and a viewing party begining at 8 p.m. on Sunday for This is Spinal Tap at Murphy’s Irish Pub.

Through Oct. 8 at various times daily in more than 60 venues in Old Town Alexandria. Admission varies.

Art on the Avenue 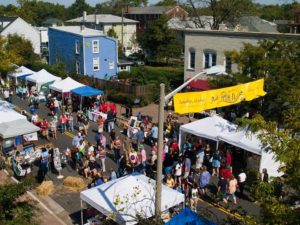 Expect more than 50,000 people to pack picturesque Mount Vernon Avenue for Art on the Avenue in the Del Rey neighborhood of Alexandria, as tents filled with hand-crafted art, clothing, jewelry, photography, paintings and more line the street. You’ll find plenty of food — either in restaurants or in the food court — as well as music on five stages throughout the day, part of Alexandria Live Music Week. A pie-baking contest will be held across the avenue from the Political Soap Box area, but don’t get any ideas. Slice of the pies will go on sale about 1 p.m. for $4 each. There will also be a kids area beside the food court with pumpkin painting, scarecrow making and more.

Oct. 1 from 10 a.m.-6 p.m. on Mount Vernon Avenue in the Del Rey neighborhood of Alexandria. Admission is FREE!

Oct. 1 from 11 a.m.-4 p.m. on K Street NW between Wisconsin Avenue and Thomas Jefferson Street. Admission is FREE! Tickets, which are good for a beer, glass of wine or restaurant small plate, are $20 for four, $30 for seven and $40 for 10 at the gate. 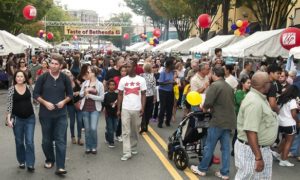 Oct. 1 from 11 a.m.-4 p.m. at Woodmont Triangle along Norfolk, St. Elmo, Cordell, Del Ray and Auburn Avenues, Bethesda. Admission is FREE! Taste tickets are four for $5 at the gate and each dish costs one to four tickets.

Work off those extra pounds from all the beer you drank during D.C. Beer Week at the Bikes and Brew Brewery Tour starting at noon Saturday. (Photo: Capital City Bike Tours)

With D.C. Beer Week wrapping up today, you might have consumed a few extra calories. Burn them of during the Bikes and Brews Brewery Tour group bike ride from City Bikes in Adams Morgan to Hellbender Brewing and Atlas Brew Works before winding up at Glen’s Garden Market in Dupont for happy hour with discounted growler fills. The total trip is about 12.5 miles. 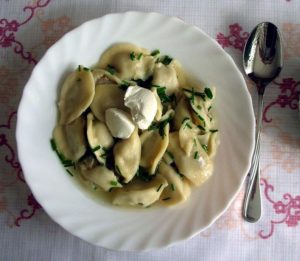 Get a taste of old Russia at St. John’s annual Russian Bazaar featuring live traditional music, homemade ethnic food such as beef stroganoff, bigus, borscht, pelmeni, pirozhki and baked goods, a book store, kids’ activities. You can get a jump on your holiday shopping with imported handicrafts such as Matryoshka dolls, handpainted eggs, Christmas ornaments, dolls dressed in traditional costumes, clothing, amber jewelry and Lomonosov china. Tours of the 17th Century-style Russian Church will be given on the half hour.

The 17th annual Capitol City Brewing Co.’s Mid-Atlantic Oktoberfest is one of the region’s biggest Oktoberfest events filling the streets of Shirlington. More than 65 breweries will pour seasonal beers while German bands and dancers perform and local restaurants sell food.

Oct. 1 from noon-7 p.m. at the Village of Shirlington, 4001 Campbell Ave., Arlington. Admission is $30 at the gate and includes a tasting glass and 10 four-ounce beer samples. Extra beers are available for $2 each. 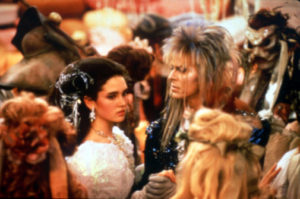 Piecing together an ’80s power trio? Look no further than Jim Henson, George Lucas and David Bowie. The three collaborated on a cult classic in 1986, which means Labyrinth, screening at the Hirshhorn’s Ring Auditorium, is celebrating its 30th birthday. In it Sarah, a selfish 16-year-old, journeys through a maical labyrinth to save her baby brother from the Goblin King, portrayed by the late Bowie.

It is never too early to think about holiday shopping. Crafty Bastards, now in its 13th year, is a chance to spend some time outside, sipping a beer and enjoying something to eat from a local food truck, while perhaps stumbling upon a handmade item that will make its way into a wrapped box come December. The annual craft fair includes 50 first-time vendors among the 150 spaces, selling jewelry, toys, prints, clothing and much more.