MRSA May Spread Through Tainted Poultry

A new form of the dangerous “superbug” methicillin-resistant Staphylococcus aureus (MRSA) may spread to humans through contaminated poultry that they handle or eat, according to a new study published Wednesday in the journal Clinical Infectious Diseases. 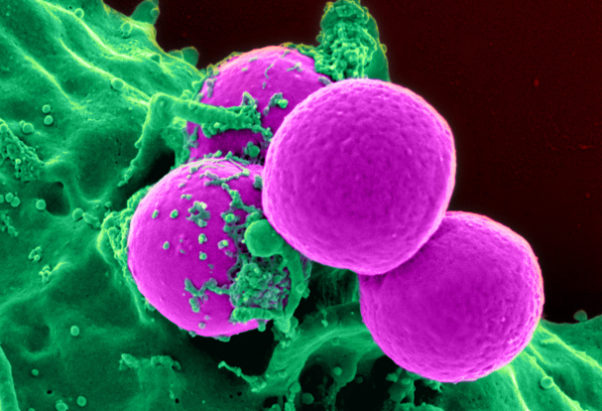 Methicillin-resistant Staphylococcus aureus (MRSA) bacteria cause a range of illnesses including skin and wound infections, pneumonia and bloodstream infections that can cause sepsis and death. (Image: National Institute of Allergy and Infectious Diseases)

MRSA, which is resistant to several antibiotics, is commonly found in locker rooms, hospitals, military barracks and other places where large numbers of people gather. The bacteria can cause serious infections, including pneumonia and bloodstream infections that can cause life-threatening sepsis.

The study focuses on a new strain of MRSA associated with poultry. MRSA is often found in chickens, pigs and other animals. Farmers, farm workers, veterinarians and others working directly with livestock often contract MRSA. However, the study headed by Dr. Robert Skov of Statens Serum Institut in Denmark and Lance Price of George Washington University’s Milken Institute School of Public Health, shows that people with no exposure to livestock are becoming infected with the new strain, most likely by eating or handling contaminated poultry.

“We’ve known for several years that people working directly with livestock are at increased risk for MRSA infections, but this is one of the first studies providing compelling evidence that everyday consumers are also potentially at risk,” said Price, director of the university’s Antibiotic Resistance Action Center.

“This poultry-associated MRSA may be more capable of transmitting from food to people. As MRSA continues to evolve, it may spread from animals to people in new ways,” said Jesper Larsen, a scientist and veterinarian at the institute, Denmark’s equivalent to the U.S. Centers for Disease Control and Prevention, and the paper’s lead author. 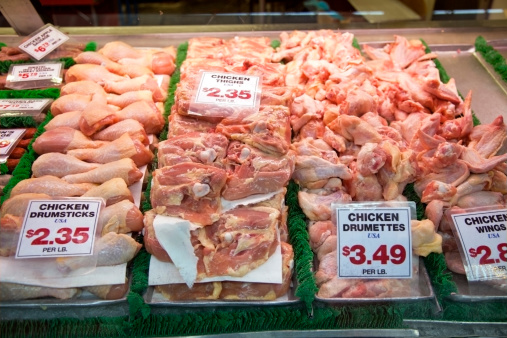 The researchers used a national database at the institute in Copenhagen and identified 10 people living in urban areas who had carried or been hospitalized with the new strain. None had worked on farms or had direct exposure to food animals. However, no Danish livestock had had that strains of bacteria. It was found in people, livestock and food products from other European Union counties and was traced to poultry imported from France, Germany, Italy and the Netherlands.

“Our findings implicate poultry meat as a source for these infections,” said Skov. “At present, meat products represent only a minor transmission route for MRSA to humans, but our findings nevertheless underscore the importance of reducing the use of antibiotics in food-producing animals as well as continuing surveillance of the animal-food-human interface.”

Other research suggests that modern farming practices, which often involve giving food animals low doses of antibiotics to spur their growth and compensate for overcrowding and unsanitary living conditions, has led to the rise of superbugs.

In the U.S., food inspectors don’t typically test poultry and other food products for staph bacteria, including MRSA, but instead are focused on salmonella and other more typical food-borne pathogens like E. coli and campylobacter.

“We need to expand the number of pathogens that we test for in our food supply, and we need international leadership to reduce unnecessary use of antibiotics on industrial farms around the world,” Price said. “This isn’t a problem unique to the EU or Denmark. Superbugs don’t respect political or geographical boundaries, so we have to work together to address this public health threat. I’m not sure that our international trade agreements are prepared to handle the specter of superbugs in meat.”