Due South Bats .500 with Southern Staples

Due South, 301 Water St. SE in The Yards’ Lumber Shed development along the Capital Riverfront near Nationals Park, serves a Southern-inspired menu with in-house smoked meats.

Due South near Nationals Park serves a Southern-inspired cuisine in The Yards development. (Photo: Mark Heckathorn/DC on Heels)

The 100-seat restaurant (which has another 85 seats on the outdoor patio along both outside walls) from Bo Blair’s Georgetown Events, which also operates Jetties, Surfside, Bayou and Smith Point as well as the Half Street Fairgrounds and The Bullpen outside the baseball stadium, opened just over a year ago in August 2015. It joins Agua 301, Osteria Morini, Ice Cream Jubilee and Whaley’s in the two-story iconic glass structure that has an open, airy feeling. Old barn wood, black and white floor tiles, touches of blue, dark wood floors, brown leather banquettes and chandeliers made from rope, bushel baskets and Edison bulbs add waterfront charm. 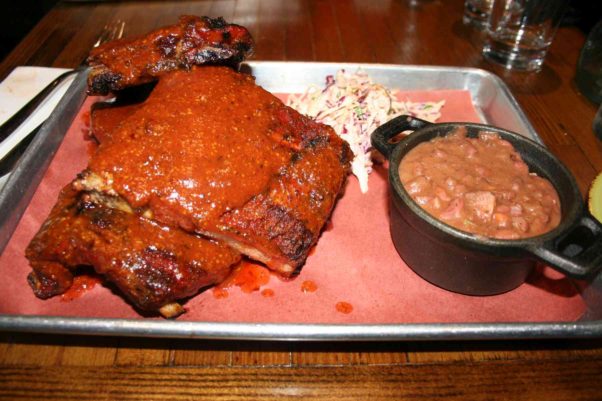 The St. Louis-style pork ribs at Due South were overpowered by the hickory smoke. (Photo: Mark Heckathorn/DC on Heels)

For the most part, the food was good, but some of the Southern staples fall short. The corn bread with molasses rosemary butter is a bit on the dry side. And while the pride of Holman’s kitchen may be the custom-made $35,000 smoker from Texas that uses hickoy wood, the smoke flavor overpowered the dry rub wings. Even the tasty Alabama white sauce — a mayonnaise-based barbecue sauce – can’t tame that smoky flavor. The same goes for the St. Louis-style pork ribs, which were short on meat and long on bone for $35 a rack. The sides – creamy coleslaw and spicy red beans with Tasso ham – were also disappointing.

The 12-hour hickory smoked Texas-style brisket on the other had was tender and tasty. And the bacon braised collard greens that came with it was the best I’ve ever had with just the right amount of vinegar and not a single bite was tough or stringy. The mac and cheese side, however, left something to be desired since it wasn’t very cheesy tasting. 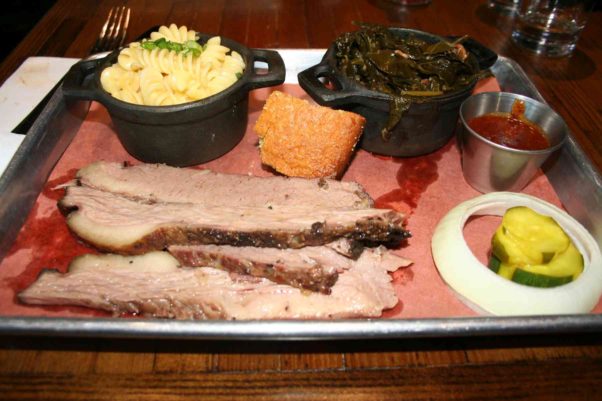 Due South’s 12-hour smoked beef brisket, on the other hand, was delicious as were the bacon-braised collard greens.
(Photo: Mark Heckathorn/DC on Heels)

The bar has 13 beers on tap including some Southern brews like Abita, Shiner and Terrapin along with a Due South-branded lager and IPA along with others in bottles and cans. It also has Abita draft root beer on tap. The bar serves about 80 bourbons as well as cocktails like a Georgia Julep with peach vodka and a bloody mary with pickled okra, spicy string beans and pimento-stuffed olive.