15 Things to Do in the DMV This Weekend

The hot and humid weather is expected to continue this weekend and into next week. There’s plenty to do indoors or in the evenings this weekend in the DMV. If you are planning to be outdoors, make sure you remember to use sunscreen and drink plenty of water. 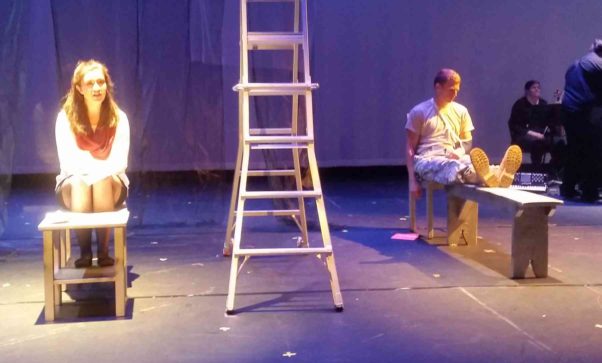 Song Reader, playing at the Capital Fringe Festival at the Atlas Performing Arts Center at 6:45 p.m. Sunday, is about a soldier who falls in love with a stripper the night before he’s deployed to Iraq. He returns suffering from PTSD and she had a child.
(Photo: Mark Heckathorn/DC on Heels)

The 11th annual Capital Fringe Festival continues this weekend with more than 130 independently produced works, ranging from burlesque and other musical forms to new spins on Shakespeare and stand-up. Performances during the 20-day festival range from theater, dance and music to visual art and everything in between. 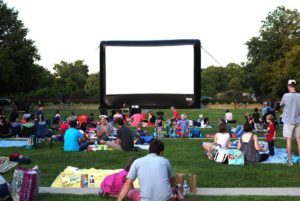 Rosslyn’s outdoor summer movie festival includes a variety of popular children’s films, including E.T. the Extra Terrestrial and Up, but the fun is amplified on Family Night, when activities and story time will accompany a public screening of Finding Nemo. The Big Cheese and Popped Republic food trucks will be on hand or take your own picnic dinner along with lawn chairs or blankets. For the adults, beer and wine will be available at the Pub in the Park. Dogs are welcome. 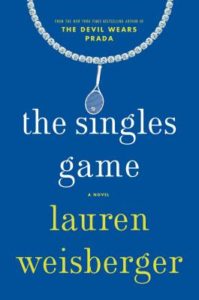 Author Lauren Weisberger will be at Politics & Prose on Friday discussing her new book, The Singles Game. (Photo: Simon & Schuster)

Lauren Weisberger, the author of The Devil Wears Pradaand its sequel, Revenge Wears Prada has traded stilettos for tennis rackets with her new novel, The Singles Game. Her sixth novel follows Charlie Silver, a rising star on the Grand Slam circuit through every bump on the road to Wimbledon including an affair with a hot Spanish payer and her relationship with a new coach, who’s avid not just to see her wine, but get her in the tabloids. Weisberger will discuss her sixth book, on sale for $26, and sign copies. 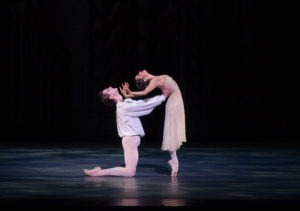 American Ballet Theatre makes its first appearance at Wolf Trap in more than three decades this weekend with Romeo and Juliet, and it’s bringing two Juliets — including one that would overshadow any Romeo. Misty Copeland, the biggest mainstream name in ballet, dances the lead role in Kenneth MacMillan’s three-hour piece on Friday, followed by Gillian Murphy on Saturday. There is a pre-performance discussion 1 hour before the start of the show on Saturday. 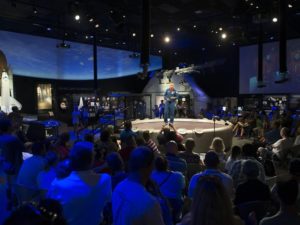 Discover how aviation and space exploration have changed our world and expanded our understanding of the universe at Milestones in Aviation and Space Family Day. Join the Smithsonian Air and Space Museum for a day of activities, demonstrations and discussions for all ages, including an appearance by NASA astronaut Patrick Forrester at 11 a.m. and 1 p.m., story time at 11 a.m. and 1:30 p.m., special presentations about the new Milestones of Flight Hall and hands-on fun including building wings and designing a lunar lander.

July 16 from 10 a.m.-3 p.m. at the Smithsonian Air and Space Museum, Sixth and Independence Avenue SW. Admission is FREE! 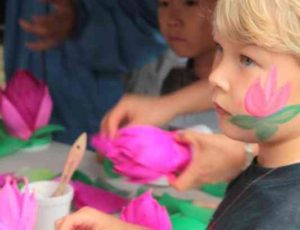 Kenilworth Park and Aquatic Gardens is the best place in the DMV to see an immense quantity of floating flowers. Its annual Lotus and Water Lilly Festival includes face painting, lotus tea tasting, painting demonstrations, gardening workshops and Asian and African dance performances. Take a picnic lunch or buy food from the vendors. Parking is available at Kennilworth Park and Kenilworth-Parkside Recreation Center. A free shuttle bush will run between the parking areas, the Minnesota Avenue Metro station and the aquatic gardens until 5 p.m. 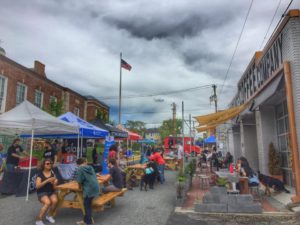 Help Vigilante Coffee celebrate its second anniversary with a block party. There will be free coffee all day, of course, along with beer from Port City, Handsome Beer and Calvert Brewing; food from Ball or Nothing and Angry Burger; and ice cream from Trickling Springs. There will also be music, art and games including a cornhole tournament and a dunk tank raising money for the Anacostia Watershed Society. 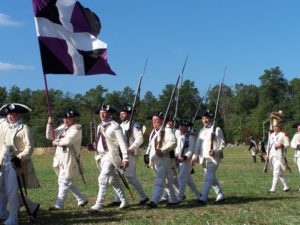 Reenactors from the Regiment de Gatinois will be at French Encampment Day at Anderson House. (Photo: Harvard Society),

Following the Battle of Yorktown, the French and American armies made the long march north to Boston. In July 1782, the French army under the command of the comte de Rochambeau stopped along Rock Creek Park to camp near the present-day site of Anderson House, the only place in the District where an army camped during the War for Independence. Celebrate the French-American alliance during the Revolutionary War at French Encampment Day. Activities include reenactors from the Regiment de Gatinois, kids crafts including making tricorn hats and a Phygian cap and a concert of 18th century French music by David and Ginger Hildebrand of the Colonial Music Institute.

July 16 from noon-7 p.m. and July 17 from noon-5 p.m. on the plaza outside Barrel & Bushel, Tysons Corner Center Plaza,7901 Tyson One Place, McLean. Tickets are $15 and include admission and two drink tickets. Saturday’s VIP tickets are $50 with 10 drink tickets and an after party with a special beer and bourbon tasting and small plates. Additional tickets are $1 each. 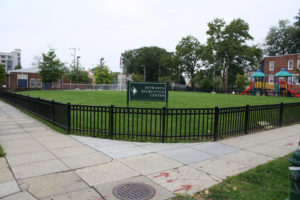 The second Petworth Park Summer Jam on the green of the Petworth Recreation Center is Saturday from 5-9:30 p.m. (Photo: Elvert Barnes) 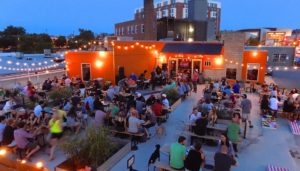 Denizens Brewing is celebrating its second anniversary with a party at its beer garden, featuring live music from Mother’s Oven, giveaways and a slate of new summer brews, including a Hefeweizen and the DubPlate double IPA. Dogs are welcome. 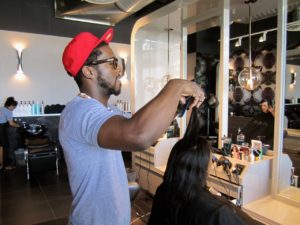 Bang Salons will hold a Style-A-Thon Sunday to rain funds for the Pulse shooting victims in Orlando. (Photo: Bang Saloon)

Bang Salon will host an 8-hour Salon-A-Thon to raise money for the victims and family of the Pulse Night Club shootings in Orlando, Fla. In the past, Bang’s annual charity hairstyling fundraiser donated to various local cancer research organizations. The salon will donate 100 percent of proceeds from each hairstyle to the Pulse Victims Fund of Orlando organized by Equality Florida, a nonprofit education and advocacy organization. Services include haircuts, trims, blowouts, color, style and deep conditioning treatments. Customers can make appointments. Complimentary champagne, mimosas and appetizers will be served.

Food Festival of the Americas

The 18th annual Food Festival of the Americas curated by the Organization of Women of the Americas is happening this weekend after being postponed from last month. It features traditional cuisine from Latin America and the Caribbean. Be transported to a corner of each participating country through the tasting of typical meals and customs. While you eat, you can feast your eyes on displays of crafts, music and dance. A raffle will offer prizes such as airline tickets, electronics, gift baskets and restaurant certificates.

July 17 from 11 a.m.-5 p.m. at the Organization of American States, 17th Street and Constitution Avenue NW. Admission is FREE! 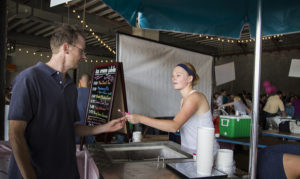 D.C. Sccop pits 11 ice cream makers against each other for the title of Best Ice Cream. (Photo: Travis Vaughn)

D.C. Scoop mixes competition with the ultimate prize: free ice cream. While the 11 ice cream companies, including two-time defending champion Nicecream Factory, go scoop to scoop for the “best ice cream” title, everyone else can try free samples or enter ice-cream-eating contests. Timber Pizza and Mason Dixie Biscuit Co. will also be there, in case you need something savory after dessert. Ice cream is also available to purchase. 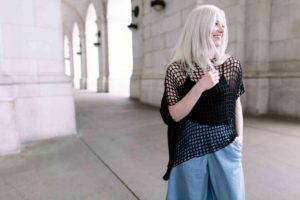 Four locally owned fashion and beauty brands, DeNada, Mint Lola, Kicheko Goods and Be Clean, are hosting a Summer Sip & Shop, an afternoon of shopping and socializing. With a nod to the DMV’s summer spirit, attendees will find skincare, hair accessories, jewelry and knitwear that are perfect for high temperatures and family vacations. In addition, attendees can meet the brand founders over handcrafted drinks and local bites.