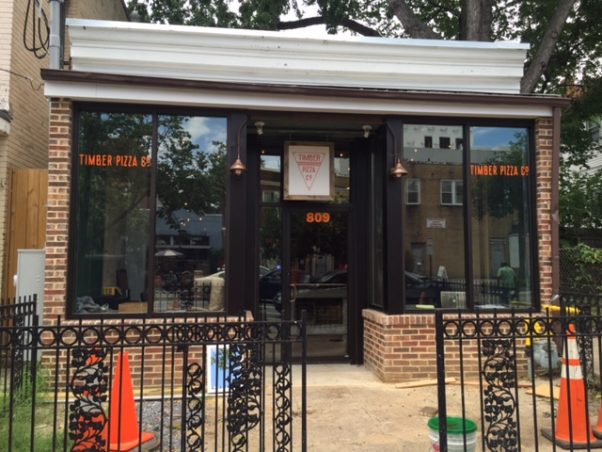 Started by owners Chris Brady and Andrew Dana in May 2014, the pair had been corporate salesmen and had never made a pizza before. But they both hated their jobs and liked pizza. They quit their jobs and began with a mobile wood-fired oven they bought from Colorado and pulled behind a 1967 Chevy truck from Minnesota to farmers markets, breweries, weddings and other events in the DMV.

They started at the Union Kitchen incubator, where they used the commercial kitchen to perfect their dough and sauce recipes. Now, with the backing of D.C.-based investors, Brady and Dana will move into a permanent home at the 36-seat restaurant on Main Street Petworth decked out in wood with a copper bar and new copper-clad wood-burning pizza oven. They will continue serving the same 12-inch “Neapolitan-ish” pies – their’s is a little crispier than classic Neapolitan dough – using mostly local ingredients from farmers markets. 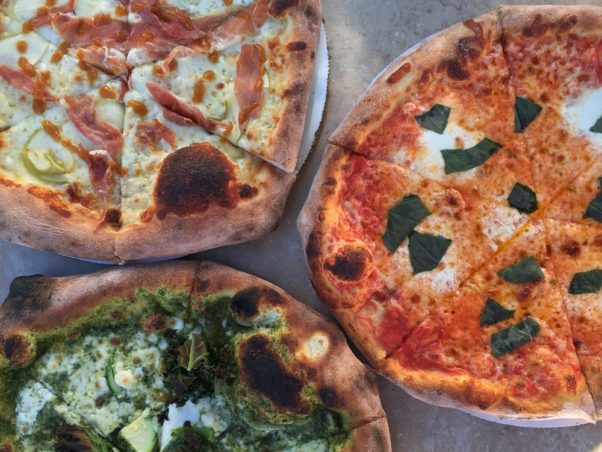 The menu will feature pizzas such as the “Cheese, Please” with San Marzano tomatoes, low-moisture mozzarella/provolone, fresh mozzarella and fresh basil; the “Pretty in Pepperoni,” a Cheese, Please with pepperoni; the “Green Monster” with pesto, fresh mozzarella, feta, kale and zucchini; and “The Lot” with olive oil, provolone and mozzarella, Dirty South Deli chopped pork, bread and butter jalapenos, Chups mango chutney and cilantro. Others include the “Big G” with pesto, smoked mozzarella, heirloom cherry tomatoes, and ham; the “809” with hot chorizo, soppressata and sweet peppers; and the “Ty Brady,” a mix of crab, corn, potatoes and Old Bay seasoning named after Brady’s dad. The pizzas are priced from $10-$17.

The menu will also feature pork empanadas and an Italian riff on elote Mexican street corn, along with local draft beers and simple summer cocktails. Dessert will be Dolcezza gelato served in house-made cones. 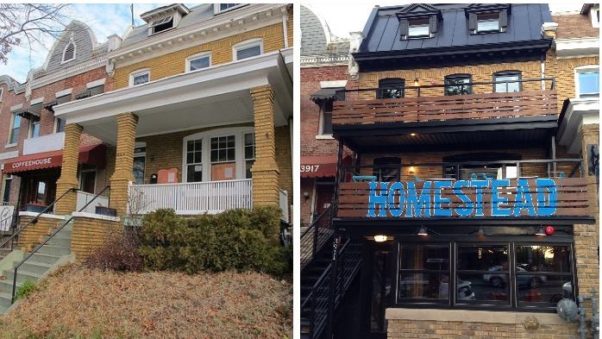 The 175-seat restaurant and bar, which occupies three levels in a converted row house, is owned by Nic and Elizabeth Makris and Blain King, who also own the Blaguard in Adams Morgan.
Homestead is more ambitious than the Blaguard when it comes to the design and food, but it is still casual. Original touches from the 1922 structure remain, although though the two-year buildout involved substantial renovations including the addition of two outdoor patios with a total of 70 seats. And each level has a bar with $10 classic cocktails like classic Manhattans and $12 specialty drinks, such as house juleps or pisco sours. There are a dozen beers on tap along with ciders and wines.

Chef Marty Anklam’s menu features homestyle cooking. The Arlington native started at Shirlington’s Bistro Bistro in high school before attending the Culinary Institute of America then working as a sous-chef at an upscale Colorado resort. The menu, served in the 70-seat mezzanine dining room, includes seasonal dishes like Roseda beef meatloaf, crab cakes, dry-aged short ribs and vegetable risotto. A handful of entrees can be made into family-style meals for two-to-four guests, which include a shareable salad, a main like whole roasted chicken and three sides for $70.

Visitors will still find sherries and carved ham on the menu when it reopens, but the bar’s focus will expand to cocktails. Edit Lab at Streetsense, who designed sister bar the Columbia Room, will revamp the interior.

Chef Robert Wiedmaier and Virginia’s Filibuster Distillery have put their minds and taste buds together to produce the first custom-bottled whiskey for the Robert Wiedmaier Restaurant Group. 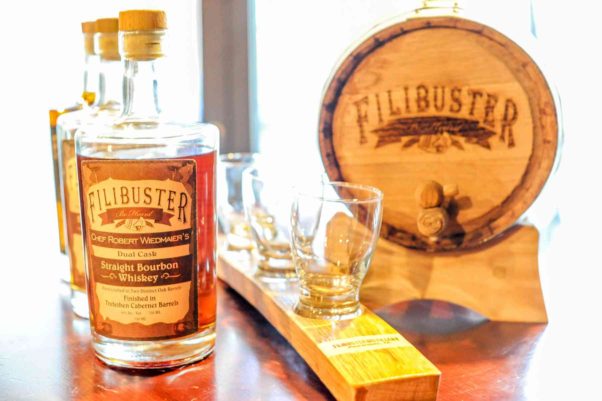 “We started with a multi-barrel blend of 4-, 5- and 6-year old straight bourbon, and then a ‘dual cask’ aging process in former cabernet sauvignon French oak barrels from Trefethen Winery is what set us apart,” said Filibuster’s master blender Sid Dilawri. “We went with a ‘high rye’ style, which is more lifted and spicy, and better with food. The final step was ‘cutting to proof’ – adding water from our deep limestone well to get it to a smooth, but flavorful, 90 proof.”

This limited edition straight bourbon is available neat, in a cocktail, or as part of a new $18 whiskey flight program at the restaurants. A flight allows guests to sample three different whiskies.

The family-owned Filibuster Distillery was founded in Washington D.C., but recently re-located to Shenandoah County, Va., where the climate, the limestone ground and water lend themselves to higher quality whiskey.

Through July 23, Esencias Panameñas, 3322 Georgia Ave. NW, 20010, is showcasing dishes from the 10 provinces and three indigenous regions of Panama leading up to its first anniversary on July 20. 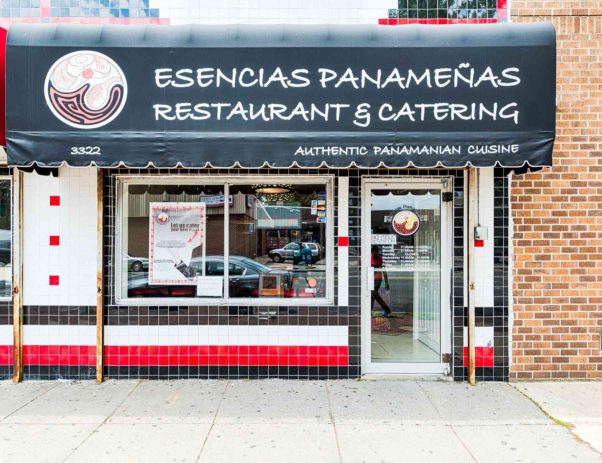 Much of the Coclé province is agricultural with sugar and tomatoes as major crops, while Colón is a seaport near the Atlantic entrance of the Panama Canal. Dishes include tasajo, dried beef spiked with V8 juice; and pastelitos de carne, puff pastry turnover stuffed with ground beef. The following week, dishes will feature Los Santos, located in Panama’s Azuero Peninsula that juts into the Pacific Ocean, and Veraguas, a province in central Panama bordered by the Caribbean Sea and the Pacific Ocean. Dishes include buñuelos o torrejitas de maiz nuevo, fresh corn hush puppies; and the corn tortilla asada changa, cast-iron corn flatbread.

Darién is the smallest province located on the eastern side of the country, while Herrera ranks third in sugarcane production. Featured dishes include arroz con coco, coconut rice; and empanadas de harina de carne o queso, beef or cheese (flour) patties. The last two provinces to be featured are Panama, which is the capital, and Panama Oeste, or West Panama, which is newest province added in 2014. Dishes include ropa vieja, shredded beef served over a bed of white rice; and chicha de arroz con piña, a non-alcoholic drink made of rice and pineapple.

The Source, 575 Pennsylvania Ave. NW, has added some new dishes to its lounge and dining room menus. 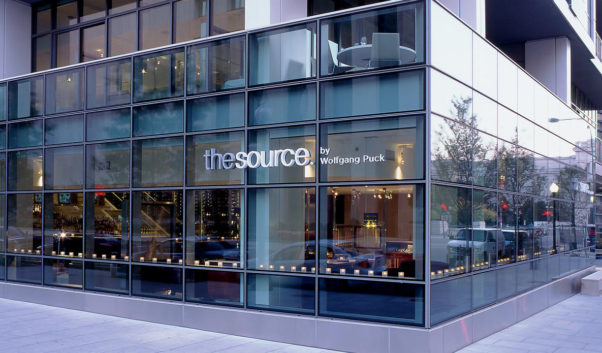 The Source has added new dishes to its lounge and dining room menus. (Photo EDG Design)

Bastille welcomes dogs to Paws on the Patio

On Sunday, June 26, from 3:30-5:30 p.m., Bastille, 606 N. Fayette St. in Old Town Alexandria’s The Asher apartments, opens its patio up to furry friends with Paws on the Patio, a family- and pet-friendly afternoon happy hour on its private patio. 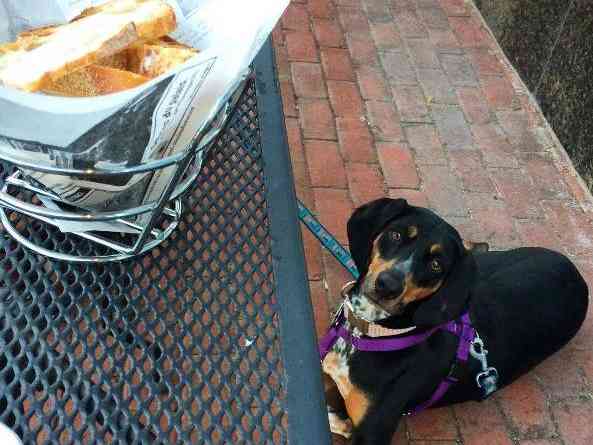 Bastille will host a special Paws on the Patio happy hour on Sunday benefiting Operation Paws for Homes. (Photo: @southwiches)

As special guests, Bastille welcomes adoptable dogs from Operation Paws for Homes, which rescues dogs of all breeds and ages from high-kill shelters. Most of the dogs come from rural shelters in South and North Carolina, as well as Virginia. The organization provides pet adoption services in Virginia, the District, Maryland, Southern Pennsylvania and neighboring states. Ten percent of the happy hour proceeds will be donated to organization. Cash donations, toys and blankets for OPH will also be accepted.

In honor of its namesake, the shark, Requin, 8296 Glass Alley in Faifax’s Mosaic District, celebrates Shark Week from June 26-July 3 with a special Shark Bite menu available all day, as well as Shark Week programming screened at the bar. 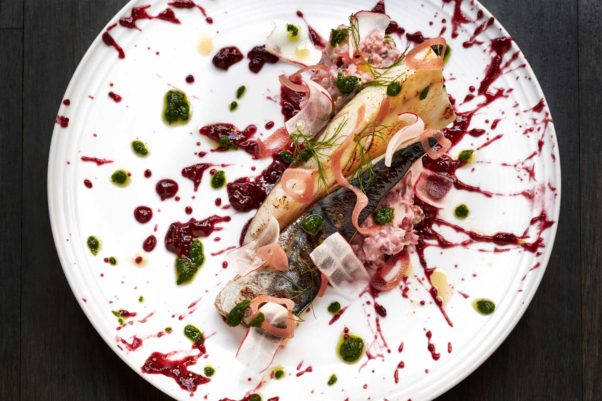 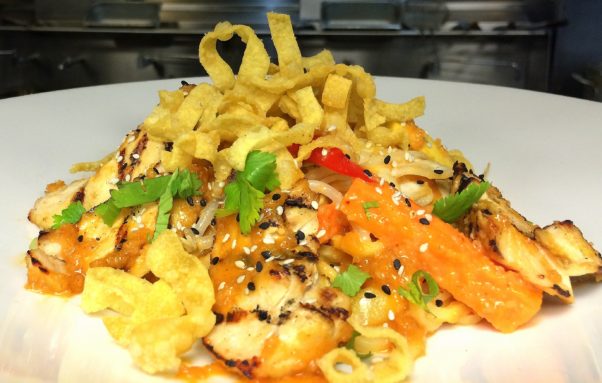 The Royal, 501 Florida Ave. NW in LeDroit Park celebrates its first anniversary on Monday, June 27 with a day of festivities. 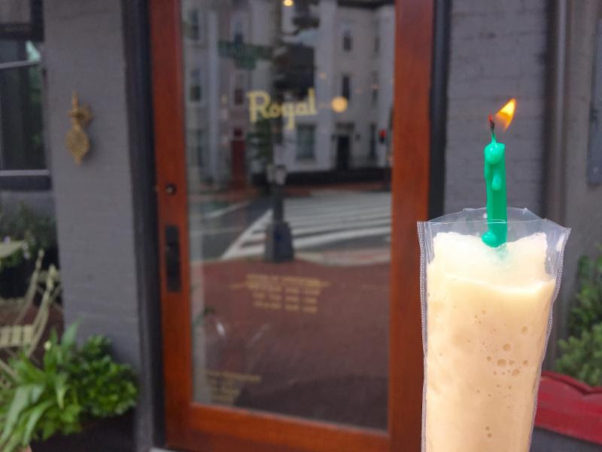 Each guest will receive a free cold brew ice pops made from Counter Culture Coffee’s limited-release Cold Hearted coffee steeped for 10 hours, with a house cold brew syrup and milk. The restaurant will also debut its brand new house Rosita vermouth, a summer rosé variation on its year-round blanc vermouth, available at just $5 all day. Brighter for the warm-weather, the floral and aromatic vermouth was made with more than 20 fresh herbs, locally-grown wormwood, rhubarb, rose petals and rosé wine, and aged in a 53-gallon Catoctin Creek rye barrel for several weeks.

To round out the celebration, the restaurant will offer all-day happy hour from 11 a.m-1 a.m. featuring $5 house vermouth and draft beers, $2 Rolling Rock ponies, $7 classic cocktails and a selection of $7 wines by the glass.

Inferno Pizzeria Napoletana, 12207 Darnestown Road, Gaithersburg, will host a pop-in chef tasting with author and chef Alex Talbot of Ideas in Food on Tuesday and Wednesday, June 28 and 29.

The tasting menu of 6-8 courses “pushes the envelope” past what is expected at a pizzeria in their execution, ingredients and technique. The pop-ins present a selection of courses such as seamless ravioli that have been rolled in semolina and allowed to sit for a day for the flavors of the egg and cheese style dumplings to meld, prior to being placed in a spring pea soup. Or octopus and njuda with charred spring onions and Manbrillo mustard. And a foccacio bread steamed in a parmesan custard then sautéed crisp and topped with prosciutto crumbs.

The pop-ins are $65 per person with an extra $35 for wine pairings and can be reserved online. 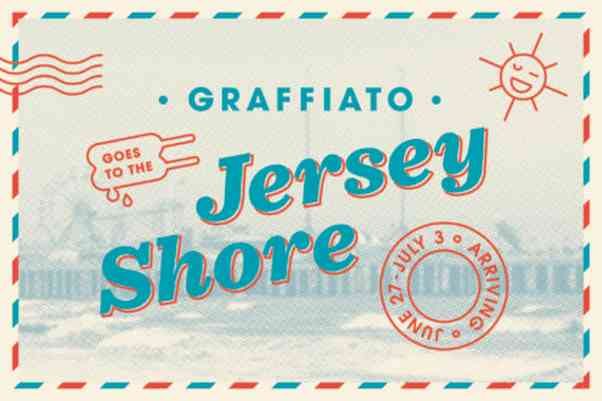 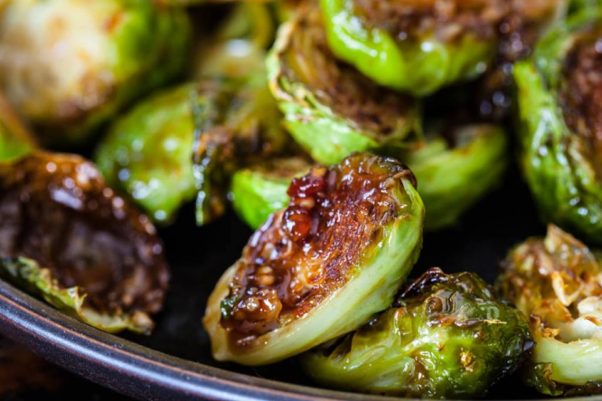 Cost of the dinner is $60 with a wine pairing or $40 without. Reservations can be made online.

Beginning July 1 through the end of the year, Lupo Verde, 1401 T St. NW, will support Defenders of Wildlife, a non-profit that protects North American animals and plants in their natural communities. 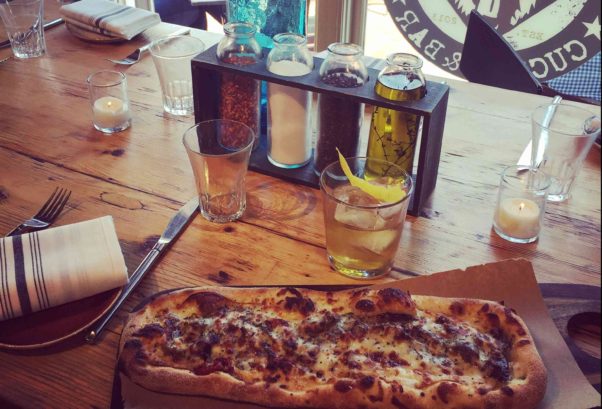 Lupo Verde will donate $2 from the sale of each Pizza Capitano and Lupo Alberto cocktail to Defenders of Wildlife through the end of the year.
(Photo: Lupo Verde)

Defenders of Wildlife and Lupo Verde both feature wolves in their logos. Lupo Verde translates as green wolf. The Mexican gray wolf, the “lobo” of southwestern lore, is one of the most endangered mammals in North America and faces a serious risk of extinction. There are only 97 lobos in the wilds of the United States and fewer than 25 in Mexico.