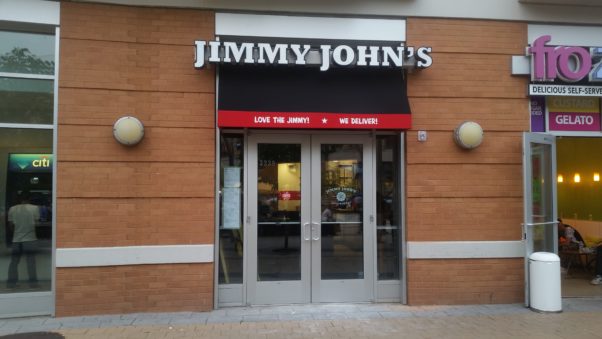 Jimmy John’s sells cold cut subs in several sizes along with its own brand of potato chips, cookies, dill pickles and sodas. It also delivers. The subs are made with locally purchased produce and meats and cheeses that are sliced by hand in each location to order. French and 9-grain wheat rolls are also baked in each store daily.

The chain was started in 1983 by Jimmy John Liautaud in Charleston, Ill., near Eastern Illinois Univeristy. Last month, the chain had more then 2,400 locations.

The restaurant, in the Park Triangle Building on the civic plaza, is between Citibank and FroZenYo. The building is becoming dining central of Columbia Heights with & Pizza opening two doors down in March and Pollo Campero also having a location in the building.

We reached out to Jimmy John’s, but there is no word on when the restaurant will open. Crews have been working on the restaurant for several months. The sign was installed last week and a peek inside reveals kitchen equipment has been installed.

More word on developments as we find out. 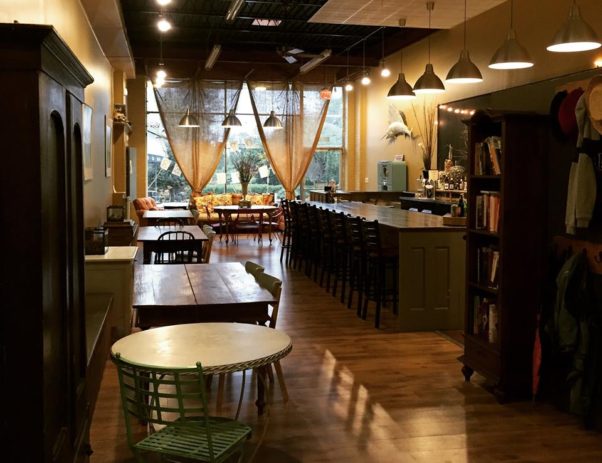 The 75 seat Dish & Dram will open in mid-July for lunch, dinner and weekend brunch.

Sub*Urban Trading owner Alison Cavallaro is moving back to Califronia after eight years of running the restaurant to be closer to family. The restaurant will be open regular hours through June 11, then open only for lunch from June 14-16, when it will close.

Polin said the cozy restaurant “will remind us of sitting around the table with family and friends here and around the world.”

Although the menu is still being finalized, the restaurant will serve seasonal comfort food with an international twist, according to its web site. It will also have a full bar featuring Irish and Scotch whiskeys, one of only a few places in the town along Connecticut Avenue near the Mormon tabernacle with a bar. 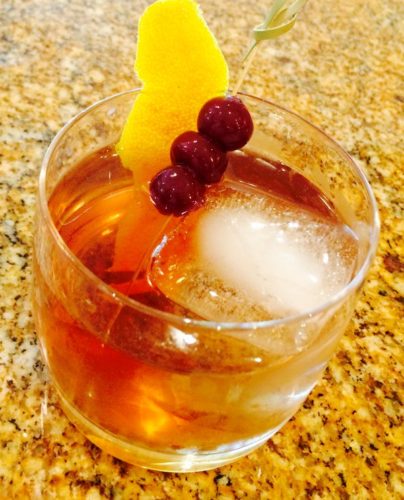 The Fig Old Fashioned at Central is made with Evan Williams bourbon, fig syrup and lemon bitters. (Photo: Central)

All cocktails and wine selections are priced at $8 and beer is $5. Cocktails include the Blackberry Royale with Cava Brut and Vedrenne Crème De Mure; the Fig Old Fashioned with Evan Williams bourbon, fig syrup and lemon bitters; a Moscow Mule with vodka, ginger beer and lime; a French 75 with Ford’s gin, sparkling wine, lemon and sugar; and Aperol Spritzer with Aperol, sparkling wine, orange juice and rhubarb; and the Cuba Libre with Flor De Cana 4-year-old rum, Coke and lime.

Lupo Verde, 1401 T St. NW, has a new aperitivo hour from 3:30-6 p.m. Monday through Friday with a menu featuring rustic, Italian fare with two small plate antipasti dishes priced from $5 to $8 at the bar and on the open-air patio. 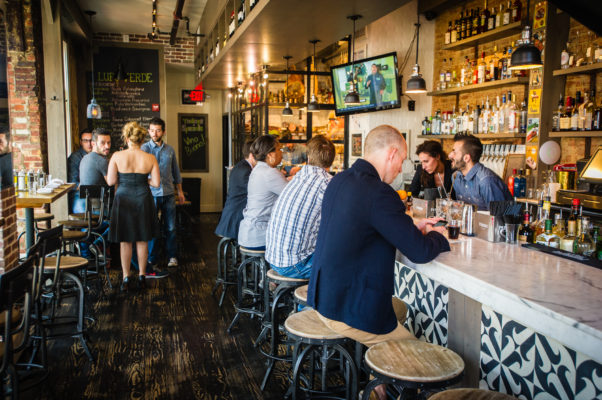 Diners can enjoy cuppitiello, crispy sardines, shrimp and zucchini with edible flowers and Meyer Lemon aioli, and patatona, rustic fried potatoes with house-made spicy ketchup. Pairings include craft cocktails, beer and wine priced from $6-$8. New seasonal cocktails include the Peppino mad with gin, limoncello, lemon juice, prosecco and orange bitters. There is also a wine, cheese and charcuterie plate for $10.

Also, Lupo Verde can create a picnic to go including a charcuterie platter with three meats and two cheeses that serves two for $30 and add on an 8-ounce jar of assorted house-pickled mushrooms or olives for $6.69 or pickled vegetables for $12. House-made panni sandwiches are also available for $12 each made with Caciocavallo Silano cheese from southern Italy, focaccia bread, prosciutto, lettuce and tomato. Picnics can be picked up 3:30-6 p.m. with 48 hours notice.

The Bird to pop-up at The Pig

EatWell DC’s new restaurant and bar The Bird, which is slated to open this fall at 1337 11th St. NW, will host a pop-up at The Pig, 1320 14th St. NW, Monday through Wednesday, May 23-25. The three-day-only preview will showcase happy hour, dinner and bar service beginning at 5 p.m. 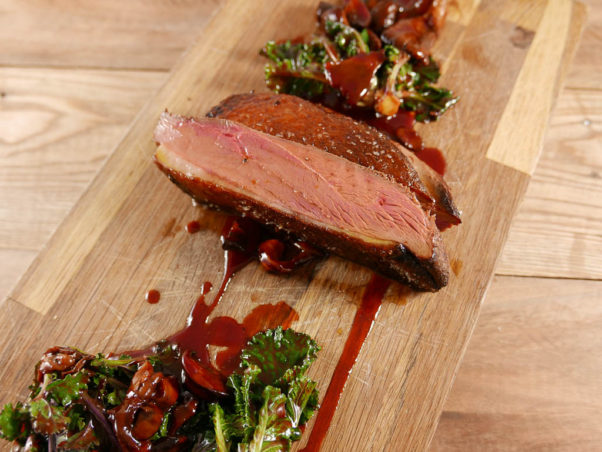 The poultry-centric restaurant will showcase four seasons of fowl, as the menu will change four times a year with the seasons, sourcing vegetables from Eatwell DC’s EatWell Natural Farm in La Plata, Md., and meat from local poultry producers.

The beak-to-toe menu includes poultry dishes from around the world using chicken and capon, duck, quail, turkey, squab, grouse, goose and ostrich and all of their various parts and pieces, as well as their eggs. Dishes will include everything from chicken wings with sweet chili, fragrant salad and lime to “the odd duck” appetizer of crispy tongues, barbeque necks, grilled hearts and duck pastrami to an entree of Korean fried quail. Desserts also get in on the theme with a duck fat doughnut with hazelnut glaze and duck fat crackling or a fried chicken and buttermilk waffle with fried chicken ice cream, maple syrup, candied cockscombs and dulcey crispy pearls. The bar will also feature poultry-centric craft cocktails, plus soft drinks and regional beers that will all be sourced from green producers.

The pop-up by reservation only. Reservations can be made by calling 202-290-2821 or emailing thebird@eatwelldc.com. Online reservations will not be accepted. 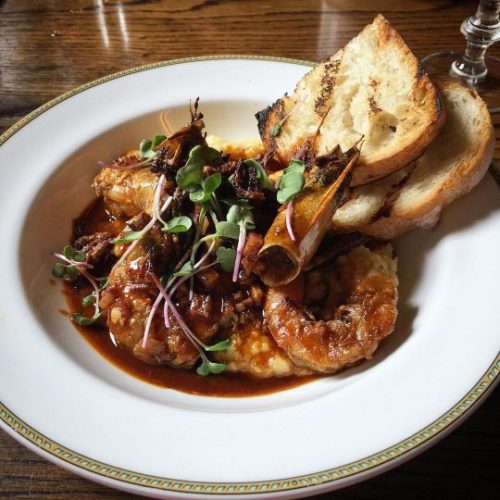 Snacks and sides include deviled eggs, yellow corn grits with cheddar, French fries and roasted mushrooms priced from $8-$10. Shrimp and grits with salami, crispy shallots and grilled bread priced at $16 and Markert’s Market, a daily selection of two vegetables is priced at $14.

Sandwiches, priced from $12-$17, include the AB+PB chicken sandwich with a crispy fried chicken breast, apple butter and pecan butter on waffles with a side salad; Pete’s Primanti Brothers Sandwich with sopressatta, pepper slaw, tomato, cheddar, French fries and a fried egg with a side salad; a P.L.T. sandwich with roasted pate, Bibb lettuce, tomato and sauce ravigote on grilled sourdough with chips; a smoked beef brisket sandwich in root beer BBQ sauce with crispy onions, coleslaw and salt and vinegar chips on a baguette; and the B Burger.

The Source by Wolfgang Puck, 575 Pennsylvania Ave. NW, is pairing up with Sonoma County’s Hartford Family Winery to host a 20-person dinner at 6:30 p.m. on Wednesday, May 25.

The dinner begins with a tasting of the Hartford Court Four Hearts Chardonnay on The Source’s outdoor patio. The outdoor reception will be immediately followed by a four-course seated dinner, which begins with a first course of wonton soup, followed by a second course of dim sum including scallop shu mai, pork pot stickers, lobster spring rolls and chicken dumplings. The third course will feature lacquered Chinese duckling and the dinner will be completed with a five-spice sorbet.

Throughout the evening, winemaker Jeff Stewart of Hartford Family Winery will be pouring a selection of the vineyard’s wines including their chardonnay, pinot noir, zinfandel and Champagne, which will complement each course.

Tickets are $85 per person. The wine pairing is $90 per person and will be charged the night of the event.

Bastille serves oysters and cocktails on the patio 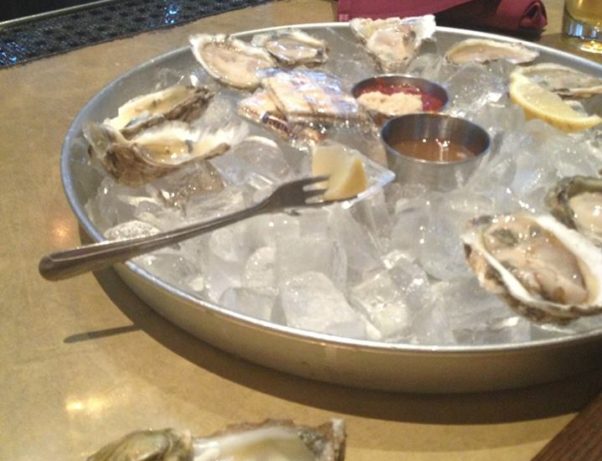 Featured beers from Port City Brewery will include Optimal Wit, Downright Pilsner and Monumental IPA. Happy hour prices will apply for the draft beers and on select cocktails and wines by the glass.

Wildwood Kitchen, 10223 Old Georgetown Road, Bethesda, will host a five-course Taste of Israel wine dinner from 6:30-8 p.m. on Thursday, May 26. 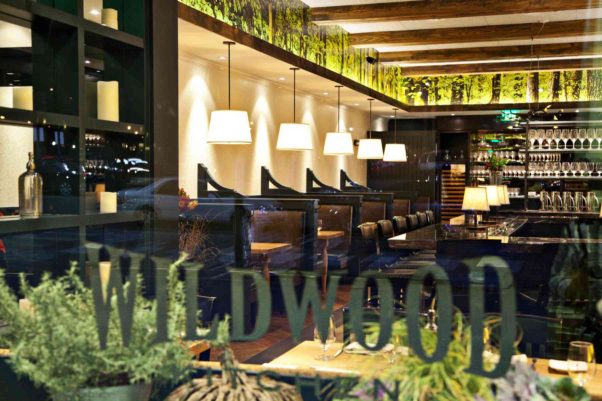 The five course dinner is $75 per person or $125 with wine pairings.