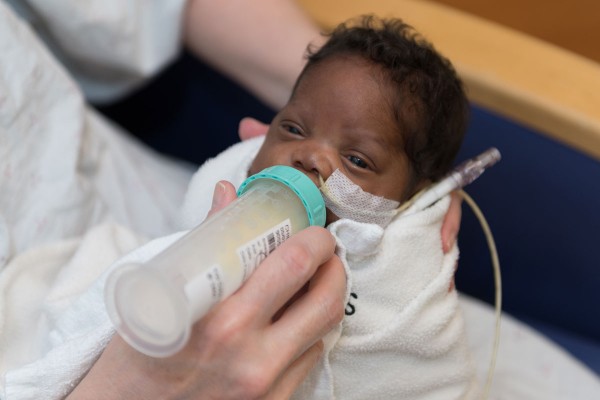 Studying preterm infants in the neonatal intensive care unit (NICU) at St. Louis Children’s Hospital, researchers found that premature babies whose daily diets were at least 50 percent breast milk had more brain tissue and cortical-surface area by their due dates than preemies who consumed significantly less breast milk. The researchers presented their findings today at the annual meeting of the Pediatric Academic Societies in Baltimore.

“The brains of babies born before their due dates usually are not fully developed,” said senior investigator Dr. Cynthia Rogers, an assistant professor of child psychiatry who treats patients at St. Louis Children’s Hospital. “But breast milk has been shown to be helpful in other areas of development, so we looked to see what effect it might have on the brain. With MRI scans, we found that babies fed more breast milk had larger brain volumes. This is important because several other studies have shown a correlation between brain volume and cognitive development.”

The study included 77 preterm infants. The researchers retrospectively looked to see how much breast milk those babies had received while being cared for in the NICU. Then, the researchers conducted brain scans on those infants at about the time each would have been born had the babies not arrived early. All of the babies were born at least 10 weeks early, with an average gestation of 26 weeks, or about 14 weeks premature. Because they are still developing, preemies typically have smaller brains than full-term infants.

First author Erin Reynolds, a research technician in Rogers’ laboratory, said in gauging the effects of breast milk on the babies’ brains, the researchers didn’t distinguish between milk that came from the babies’ own mothers and breast milk donated by other women. Rather, they focused on the influence of breast milk in general. 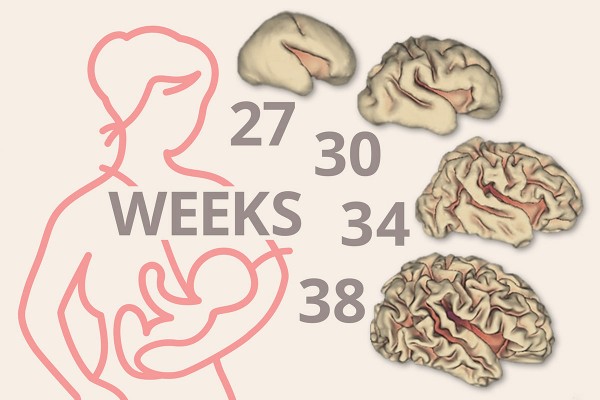 Because babies born prematurely are still developing, they typically have smaller brains than full-term infants. Shown are depictions of the cortical-surface area of the brain at different points in gestation. (Graphic: Eric Young)

“As the amount of breast milk increased, so did a baby’s chances of having a larger cortical surface area,” Reynolds said. “The cortex is the part of the brain associated with cognition, so we assume that more cortex will help improve cognition as the babies grow and develop.”

Preterm birth is a leading cause of neurologic problems in children and has been linked to psychiatric disorders later in childhood. Rogers and her team plan to follow the babies in the study through their first several years of life to see how they grow, focusing on their motor, cognitive and social development. As the babies get older, the researchers believe they will be able to determine the effects of early exposure to breast milk on later developmental outcomes.

“We want to see whether this difference in brain size has an effect on any of those developmental milestones,” Rogers said. “Neonatologists already believe breast milk is the best nutrition for preterm infants. We wanted to see whether it was possible to detect the impact of breast milk on the brain this early in life and whether the benefits appeared quickly or developed over time.”

Rogers said further investigation is needed to determine specifically how breast milk affects the brain and what is present in the milk that seems to promote brain development. She explained that because all of the babies in the study were born early it isn’t clear whether breast milk would provide similar benefits for babies born at full term.