Celebrate Earth Day or a Birthday

It is Earth Day weekend and there are plenty of opportunities to get outside and enjoy nature. You can help clean up the Anacostia River, visit a national park for free or sip wine along the Potomac. You can also help celebrate Ella Fitzgerald’s and William Shakespeare’s birthdays. Of course, there are plenty of things to do indoors too.

Unfortunately the cherry blossoms are gone and Metro is resuming track work this weekend. Red Line trains will single track between Van Ness and Dupont Circle with trains running every 18 minutes. Orange and Blue Lines will single track between Eastern Market and Stadium-Armory with trains operating every 20 minutes. Because of the work, Silver Line trains will run every 10 minutes, but only between Wiehle-Reston East and Ballston. Yellow Line trains will operate on are regular weekend schedule, but only between Huntington and Mount Vernon Square. And on the Green Line, trains will operate on a regular schedule but the Greenbelt station will be closed to replace the pedestrian bridge over the tracks. Free shuttle buses will replace trains between College Park and Greenbelt. 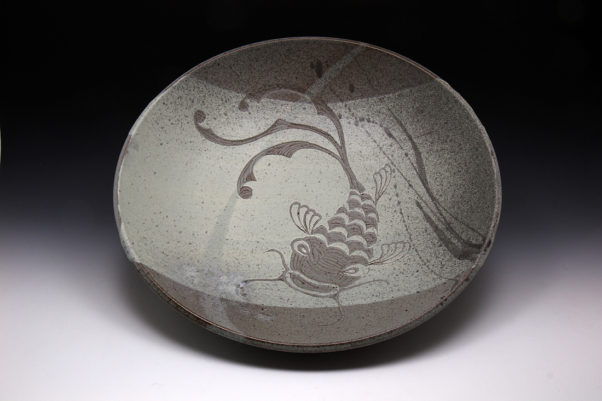 There are 120 artists selling their ceramics, furniture, jewelry, leather, metal, tapestries and more at this year’s juried Smithsonian Craft Show. Four local artists are included in the juried show including Namu Cho, a jewelry maker from Bethesda; Michael Heilman, a weaver from Alexandria; Mea Rhee, a potter from Silver Spring; and Judith Varga, a potter from Kensington. Also on display – but unavailable for purchase – is an installation from glass artist Dale Chihuly’s “Macchia” series featuring 12 sculptures never before displayed in the DMV. The Seattle-based artist is this year’s recipient of the show’s Visionary Award.

Admission to Great Falls along with other national parks across the country is free this weekend.
(Photo: Mark Heckathorn/DC on Heels)

As part of its 100th birthday celebration, the National Park Service has is offering free admission to parts that typically charge a fee during National Park Week, which ends this weekend. Locally, that includes Great Falls, Manassas National Battlefield and Fort McHenry. Others within a short drive include Harpers Ferry in West Virginia, Antietam National Battlefield in Maryland and Shenandoah National Park in Virginia, although a forest fire and ongoing investigation has shuttered the fire road, but not Old Rag, which remains open to hikers.

Through April 24 at all national parks that normally charge an entrance fee. Admission is FREE!

My Internship in Canada closes Filmfest D.C. at 4 p.m. Sunday at AMC Mazza Gallerie. Academy Award-nominated director Philippe Falardeau will be on hand for a Q&A after. (Photo: Film Distributors)

Filmfest D.C. is wraps up its 30th anniversary this weekend. The festival featured 75 films from 45 countries over 11 days. This year’s movies includes thrillers, comedies, social justice films, films from Cuba, shorts and films on music with live pre-screening performances.

Through April 24 at various times at AMC Mazza Gallerie, 5300 Wisconsin Ave. NW and E Street Cinema, 555 11th St. NW. Tickets are $14.50 online until the day before the show or $13 at the door one hour before the first screening of the day. A director’s package is available for $103 for 10 shows and a weekday package good for four screenings Monday through Thursday is $46.50. Student tickets are $10 at the door with ID. If tickets are sold out on line, some are reserved to be sold at the box office the day of the show.

Earth Day is Friday, but the Anacostia Watershed Society is holding an Earth Day Cleanup and Celebration at 31 sites throughout the District and Montgomery and Prince George’s counties in Maryland. Last year, 37 tons (74,275 pounds) of trash was collected including 306 tires. All tools and supplies are provided, including gloves. To find a location, visit the website’s map. A celebration will follow will live music from Rise Band & show playing Motown, R&B and the classics with local exhibitors, speakers and a free lunch for volunteers. (There is another event at RFK that day, but your Earth Day t-shirt will get you free parking.) 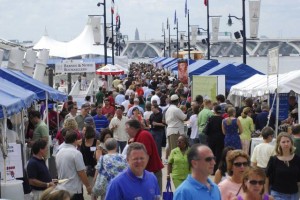 Visitors to the National Harbor Wine & Food Festival on the piers in 2013. (Photo: Trigger Agency)

Spend your weekend sipping wine by the water. The National Harbor Wine & Food Festival includes more than 150 kinds of wines, beers and spirits, as well as cooking demonstrations from area chefs. Guests will be able to sample all of the varieties as well as purchase them by the glass and bottle on-site at special event prices. There will also be a special craft beer tasting bier garten, whiskey and bourbon tasting lounge and three stages of live music. Special appearances on the cooking stage include chefs Scott Drewno of The Source, Jennifer Carroll of Requin and Victor Albisu of Del Campo on Saturday and chefs Kwame Onwuachi of Shaw Bijou, Matt Baker of Gravitas and Danny Lee of Mandu on Sunday. Food trucks will be onsite. VIP guests also get access to the VIP pier with food tastings from noon-3 p.m. from restaurants such as Granite City Food and Brewery, Nando’s Peri-Peri, Bobby McKey’s, Mason Dixie Biscuit Co. and BJ’s Restaurant and Brewhouse. 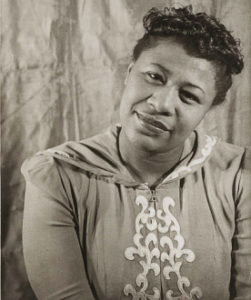 In celebration of Jazz Appreciation month and as part of the Smithsonian’s American Art Museum’s annual birthday salute to Ella Fitzgerald, the museum will host Happy Birthday Ella. The Smithsonian Masterworks Jazz Ensemble will perform works that span “the First Lady of Song’s” career and highlight the timelessness of her work. Also, speed painter Dan Dunn will create a portrait of Fitzgerald during the concert. 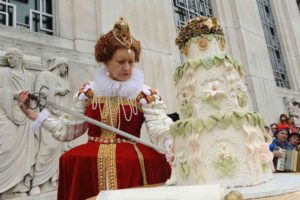 Join the Folger Shakespeare Library for its annual Shakespeare’s Birthday Celebration. The Folger celebrates the bard’s birthday with a day full of activities including a special birthday performance from the Reduced Shakespeare Co., five-minute versions of his plays from the Nickel Shakespeare girls, musical performances by WETA Classical Players, the U.S. Army Fife and Drum Corps, stage combat demonstrations, Elizabethan crafts and a special appearance by Queen Elizabeth I herself. Of course, there will be birthday cake too. (Food trucks will also be available in Puck’s Circle if you want something more to eat.) 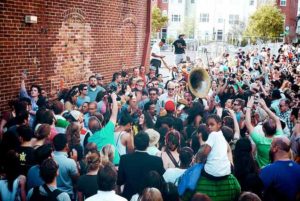 The Kennedy Center will host a free preview of D.C.’s Funk Parade on Sunday at 6 p.m. (Photo: Funk Parade)

Get a special preview of the D.C. street fair, music festival and parade at Target Family Night: Funk Parade. The Funk Parade, which takes place May 7 along the U Street corridor, is a celebration of the city’s vibrant cultural past, as well as a showcase of the current artistic community.