This weekend is a big one for the National Cherry Blossom Festival with the Blossom Kite Festival on the grounds of the Washington Monument on Saturday. But if you were a fan of Light Yards a few weeks ago at Yards Park, or missed it, Light City comes to Baltimore on a much grander scale with 26 lighted art installations around Inner Harbor and more in nearby neighborhoods. The Nats play their last two exhibition games against the Minnesota Twins before Thursday’s home opener against the Miami Marlins. If you’d rather do something inside, the Annapolis Film Festival is back with more than 70 films.

Although no work is planned on Metrorail this week due to the National Cherry Blossom festival activities and visitors, the Mount Vernon Square station will be closed Friday due to the 2016 Nuclear Summit. One it ends on Friday, regular train service will resume on Saturday. During the closure, trains will operate through the station without stopping. Use either the Gallery Place-Chinatown or Shaw-Howard University stations as alternates. 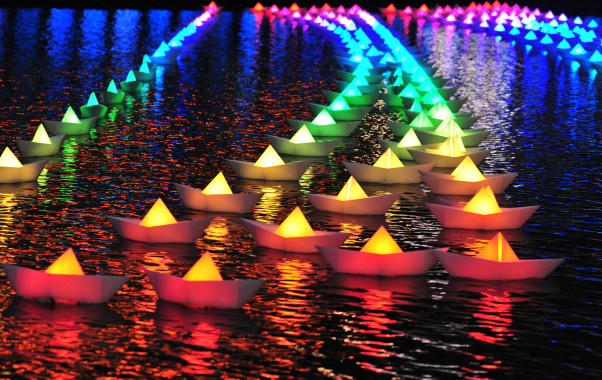 Touting itself as the first U.S. large-scale light festival, Light City will illuminate Baltimore throughout the weekend with 26 colorful, glowing art installations, music performances, theater and more. Look for music on Saturday from Dan Deacon at Club Light City and Dan Darwin, a juggler and comedian from America’s Got Talent on the Circus of Wonders stage, Saturday and Sunday evenings. The action is focused around Inner Harbor and the surrounding areas with the “Voyage” installation of 300 floating “paper boats” encasing colored LED lights on the harbor’s water between Piers 5 and 6; the “Laser Lotus” display of an interactive lotus flower sculpture that sits in the water between the Power Plant and the Baltimore Aquarium with touch pads that allow festival-goers to control its looks; “Projected Aquaculture,” which projects animations such as fish and blue crab from the Chesapeake Bay onto the Columbus Center awnings; and “The Pool” at Pratt and Light Streets, concentric light circles created from interactive circular pads where play and collaborative movement work together to create swirling effects of light and color. For a complete schedule of events, check the online schedule.

April 1 and 2 from 7 p.m.-midnight and April 3 from 7-11 p.m. at Baltimore’s Inner Harbor with neighborhood light displays in Coldstream Homestead Montebello, Hampden, Greater Mondawmin, Little Italy and Station North. Workshops are at various times and locations. Admission to all events, except workshops, is FREE! 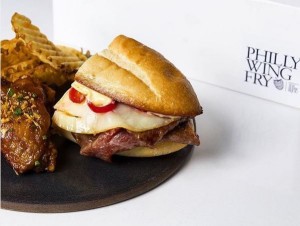 At Shaw Bijou chef’s Kwame Onwuachi;s Philly Wing Fry pop-up at Union Market, diner can get a mini Waygu cheesesteak with hand-cut waffle fries, a pair of tamarind-glazed chicken wings and a house-made soda for $15 with proceeds going to No Kid Hungry.
(Photo: Union Market)

Former Top Chef contestant Kwame Onwuachi will host his Philly Wing Fry pop-up at Union Market this weekend. The at the forthcoming fine-dining Shaw Bijou has dry-aged wagyu loins that won’t wait for the restaurant to open, so he’s serving mini cheesesteaks with smoked provolone, roasted garlic aioli, pickled pearl onions and caramelized onions on a miniature banh mi roll from Lyon Bakery toasted with dry-aged beef fat along with hand-cut waffle fries and a pair of tamarind-glazed confited, cooled and fried chicken wings — each with a wing and drumette– and a house-made soda. Soda flavors include strawberry-rhubarb, cucumber-apple or yuzu-black-tea-sea burkthorn. 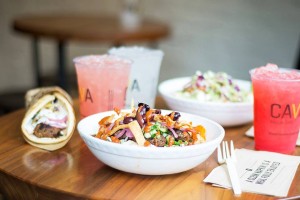 Cava Grill will open its next restaurant in Dupont Circle on Saturday with free lunch from 11 a.m.-2 p.m. Friday. (Photo: Cava Grill/Facebook)

Dupont residents can rejoice as Cava Grill opens its 15th location. In true Cava Grill style, lunch will be free at the new location with free grain bowls, salads and pitas. Donations will be given to City Blossoms, which champions healthy eating through garden-based learning in the DMV. The restaurant will open for regular service from 11 a.m.-10 p.m. seven days a week beginning Saturday. 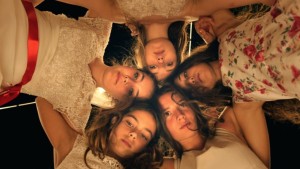 The Annapolis Film Festival features more than 70 films over four days. The festival includes filmmakers, showcases, Q&As, panels and parties. Films include narratives, documentaries and short films from 22 countries, including an Academy Award-nominee and selections from Sundance and SXSW. The Saturday Night Spotlight is The Waiting fresh from SXSW, in which an experiment to convince another person that he or she is being haunted, pushes a strained friendship between two teenage boys to cross moral and legal lines to wreak supernatural havoc on their elderly neighbor played by James Caan. It will be shown at 8 p.m. in St. John’s College FSK Auditorium followed by a Q&A with director Karsa Farahani, actors Logan Miller and Keir Gilchrist, as well as producers Ti and Tervor White and executive producers Jeff Currier and Fred Gundry. On Sunday, Oscar-nominated Mustang (in Turkish with English subtitles) about five orphaned teenage sisters whose guardians remove all “instruments of corruption” and subjects them to endless preparations for marriage and domesticity, As the eldest sisters are married off, the younger ones band together to avoid the same fate. It will be shown at 12:45 p.m. Sunday in Maryland Hall Auditorium.

Through April 3 at various times in nine venues around the city. Tickets range from $12.50 for adults and $10 for students and seniors for a single film. Passes are $115 for a festival pass or $50 for day pass. 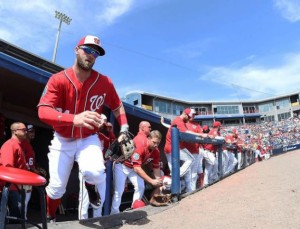 Bryce Harper takes the field prior to a spring training game against the New York Mets.
(Photo: Stacy Revere/Getty Images)

With spring training winding down, the Washington Nationals play two final exhibition games against the Minnesota Twins this weekend. The official home opener is Thursday against the Miami Marlins at 4:05 p.m. 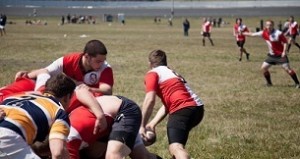 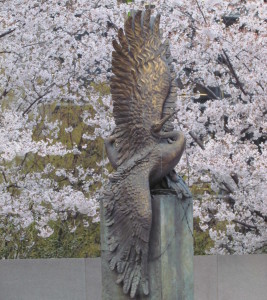 The 18th annual Cherry Blossom Freedom Walk is a 2.5-mile, non-competitive walk and program to celebrate and learn about the Japanese-American spirit of patriotism and perseverance during World War II. The Nen Daiko drummers of the Ekoji Buddhist Temple in Virginia will perform at 9:30 a.m. and the program will begin at 10 a.m. with keynote speaker Jonathan B. Jarvis, director of the National Park Service. Other speakers include former Secretary of Transportation Norman Mineta, who live in an internment camp as a child, and Japanese Ambassador Kenichiro Sasae.

April 2 from 9 a.m.-noon at the National Japanese American Memorial to Patriotism During World War II, intersection of D Street and New Jersey Avenue and Louisiana Avenue NW. Admission is FREE! 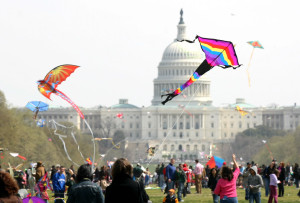 The National Cherry Blossom Festival organizers are calling the Blossom Kite Festival a celebration of “50 years of kite flying” on the Mall, dating back to the first Smithsonian Kite Festival in 1967. See colorful kites take over the sky over America’s Front Yard as families take part in the fun. There will be competitions and demonstrations including a “kites of the decades” demonstration, Rokaku battles and the Hot Tricks Showcase. Take your own kites or make one at an activity station on the public field.

April 2 from 10 a.m.-4:30 p.m. on the grounds around the Washington Monument near 17th Street NW and Constitution Avenue. The rain date is April 3 beginning at noon. Admission is FREE! 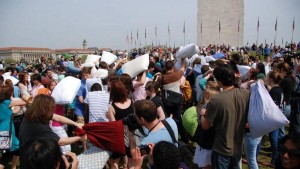 The rules for International Pillow Fight Day are simple: Wait for the signal to begin, swing pillows lightly, do not swing at people without pillows or with cameras, remove your glasses and leave down pillows at home. Other than that, the pillow fight staged on the Mall resembles the same thing you did with your siblings, cousins and friends as a kid, just on a much larger scale, with a more scenic backdrop.

April 2 at 3 p.m. in the small park at the northwest corner of Independence Avenue and 14th Street NW overlooking the Washington Monument. Admission is FREE!

Yama, a 600 pound sumo wrestler from Japan, waves to the crowd at Mall of America. (Photo: Aaron Lavinsky/Star-Tribune)

Three former Sumo champions — 370-pound Byamba, 600-pound Yama and 220-pound Takeshi — will wrestle and accept challenges and pose for photos at Sumo-Sized Sunday in Shaw. The event, sponsored by the Shay and Atlantic Plumbing, will be held in a nearby lot. Chef Katsuya Fukushima from Daikaya and the soon-to-be-open Shaw restaurant Haikan restaurant will be serving chanko nabe, a dish commonly eaten in vast quantity by sumo wrestlers as part of a weight-gain diet. 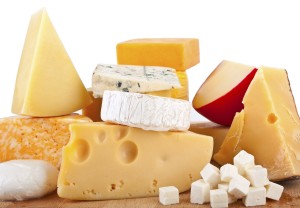 Celebrate all things cheesy with the second annual Ripe cheese and beer party at Right Proper Brewing Co. Your ticket includes unlimited sampling of at least 40 different local and international cheeses; the chance to talk to Maryland and Virginia cheesemakers; and a menu that includes gourmet grilled cheese sandwiches, raclette and fondue. You also get three beers. There are beer and cheese pairings, too. If you need a palate cleanser, there’s free Dolcezza gelato. 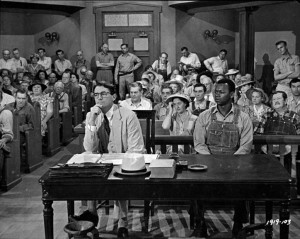 The National Portrait Gallery will screen To Kill a Mockingbirg with Gregory Peck and Brock Peters (l to r) in celebration of Peck’s 100th birthday. (Photo: Universal Pictures)

The National Portrait Galley’s Reel Portraits celebrates Gregory Peck’s 100th birthday with a double screening of Peck films: To Kill a Mockingbird and A Conversation with Gregory Peck. The screenings include a discussion of the latter film by the film’s producers, Barbara Kopple and Linda Saffire, and Cecilia Peck, the late actor’s daughter.