Twentieth Century Fox’s Deadpool remained in first place at the box office last weekend (Feb.19-21) with $56.47 million. The Ryan Reynolds led antihero film was down a 58 percent from its opening weekend, as exceptional word of mouth wasn’t enough to offset initial fan-driven front-loading. In general, X-Men universe films have experienced sharp second weekend declines. In the bigger picture, the relatively modestly budgeted Deadpool has already grossed $236.87 million in 10 days of release. That is an impressive 45 percent better than the $162.02 million 10-day take of X-Men: Days of Future Past, which also had the added advantage of higher priced 3D admissions; something that Deadpool doesn’t have. Without taking into account rising ticket prices, Deadpool is already the highest grossing X-Men universe film of all-time domestically, as it has passed the $234.36 million total gross of 2006’s X-Men the Last Stand. 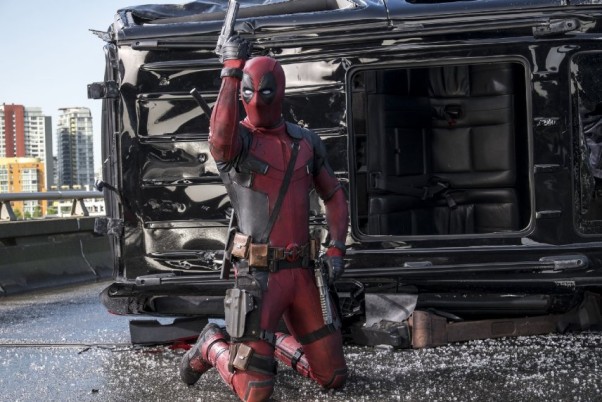 Deadpool held on at the top of weekend box office for a second week. (Photo: Joe Lederer/Marvel)

Fellow 20th Century Fox release Kung Fu Panda 3 held steady in a distant second place with $12.52 million. The 3D computer animated sequel from DreamWorks Animation was down 37 percent from the previous weekend. The movie has grossed $117.12 million through 24 days of release. Kung Fu Panda 3 should hold up well next weekend, before taking a hit the following weekend from the arrival of Disney’s Zootopia on Mar. 4.

Risen was the weekend’s top new release with a third place debut of $11.80 million. The faith-based film from Sony’s AFFIRM Films label starring Joseph Fiennes was off to a solid start, opening on the high end of expectations. Due in part to the faith-based competition the film faces in March, it seems likely that Risen will display holding power.

The Witch debuted in fourth place with $8.80 million. A24’s low-budget R-rated horror film opened on the high end of expectations and performed very nicely with its price tag in mind. The Witch benefited from its strong reviews. However, it doesn’t appear to be going over anywhere near as well with moviegoers. Regardless of how well the film ultimately holds up going forward, it generated a healthy opening weekend performance for A24 as the distributor’s first traditional opening weekend wide release.

Warner Bros. Studios’ How to Be Single rounded out the weekend’s top five with $8.20 million. The romantic comedy from New Line and MGM featuring Dakota Johnson and Rebel Wilson was down 54 percent from the previous weekend. That represented a respectable second weekend hold; especially given that the previous weekend’s performance was inflated from Valentine’s Day falling on Sunday. How to Be Single has grossed $31.75 million in 10 days. That is towards the higher end of expectations.

Race debuted in sixth place with $7.35 million. Focus’ Jesse Owens biopic opened a bit below modest expectations. It will hope to hold up well going forward thanks in part to skewing heavily towards older moviegoers — 76 percent of the film’s audiences was 25 years and older — and in part to strong early word of mouth.

Meanwhile, Paramount Pictures’ Zoolander 2 continued its disappointing run with a seventh place take of $5.54 million. The PG-13 rated comedy sequel starring Ben Stiller and Owen Wilson was down 60 percent from the previous weekend. Zoolander 2 has grossed just $23.67 million in 10 days, which places the film an underwhelming 16 percent behind the unadjusted $28.34 million 10-day take of 2001’s Zoolander, which fell 39 percent in its second weekend to gross $9.52 million. Zoolander 2 will probably continue to fall off quickly going forward due in part to poor word of mouth among moviegoers.