Bocce, Bowling and Dinner at Pinstripes

A friend and I ventured to see the Glow light display in Georgetown at Christmastime and decided to grab a bite at Pinstripes, 1064 Wisconsin Ave. NW, in the rear of Georgetown Park (formerly the Shops at Georgetown) along the C&O Canal. The 34,000-square foot Italian-American restaurant opened in February 2014 with 14 bowling lanes and six bocce. There is also a year-round patio with a fire pit to curl up in front of with a blanket you can borrow. 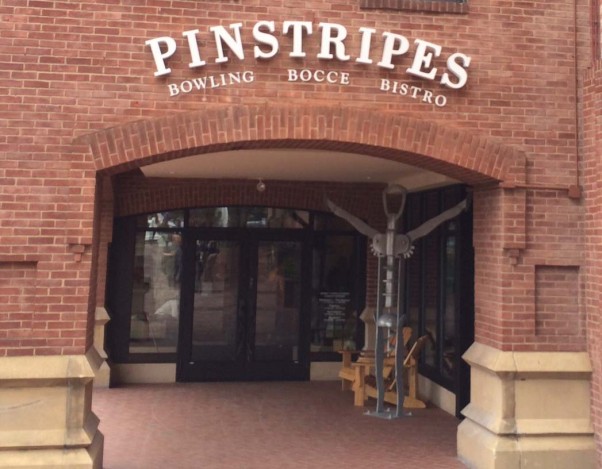 Pinstripes is located in Gergetown Park, formerly the Shops at Georgetown, along the C&O Canal.
(Photo: Dine and Drink D.C.)

The restaurant wasn’t busy as it was about 9:30 p.m., but the service was HORRIBLE. It started with check-in – there are two hostess stands. The one immediately inside the door, we found out after waiting in line several minutes, was for the bowling and bocce. The one to get a table is a bit farther back, in front of the open kitchen. Neither, by the way, is marked.

After being seated, dinner began pleasantly enough with our server quickly taking our drink order, which he served with warm bread and an olive oil-pesto dipping sauce. The bread and sauce is one of the best things you’ll eat at Pinstripes. He returned to take our order, and we requested more bread. But, service went only downhill from there. It took a long time to get the bread refill. The server said he was waiting for it to come out of the oven, although other guests were getting it. As he walked away, the manager passed by with several servings on a tray, and we were able get some. 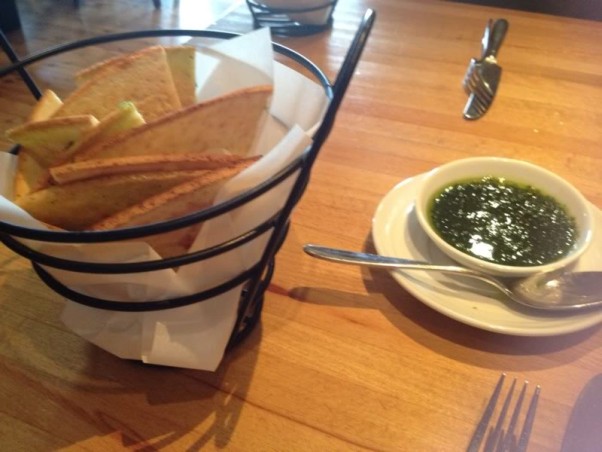 The free flatbread and pesto olive oil was the best. (Photo: The Shopper’s Apprentice)

After about 30 minutes, the server finally brought our appetizer of fried calamari and marinara. After only a few bites, someone else showed up with our entrées. She offered to take them back, but after voicing our displeasure and knowing full well the plates would just sit under the heat lamp, we opted to keep them. The manager, seeing we were displeased, stopped to apologize and offer use free s’mores for dessert. But to add insult or injury, our server dropped the check even before asking if we wanted dessert or bringing the s’mores. Maybe it was his first night ever waiting tables, but he should consider another profession.

As I said, the flatbread strips and olive oil-pesto were excellent. In fact, I could have filled up on it. The friend calamari and marinara ($13) was also tasty and not rubbery as some restaurants serve it. 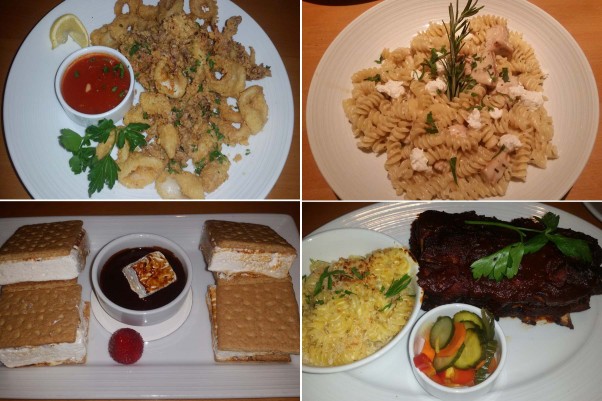 Despite poor service, most of the food was tasty: (clockwise from top left) fried calamari, chicken and goat cheese, baby back ribs with mac and cheese, and s’mores. (Photos: Mark Heckathorn/DC on Heels)

For my entrée, I ordered chicken and goat cheese ($16) with house-made fusilli pasta and a rosemary cream sauce. I was very pleased with my selection, although it could have used more chicken. The goat cheese, however, added a nice contrast to the cream sauce. My friend ordered the baby back ribs ($24) with a balsamic barbeque sauce, mac and cheese and pickled vegetables. Listed as one of the chef specialties, the ribs were a bit tough and the mac and cheese could have used a stronger cheese mixture. It was a bit bland and white with a very mild cheese. For dessert, the s’mores ($7) were delicious. The marshmallows are house-made and brűléed before serving, and the chocolate is served melted in a ramekin to pour over the marshmallow and graham cracker sandwich or to dip it in. 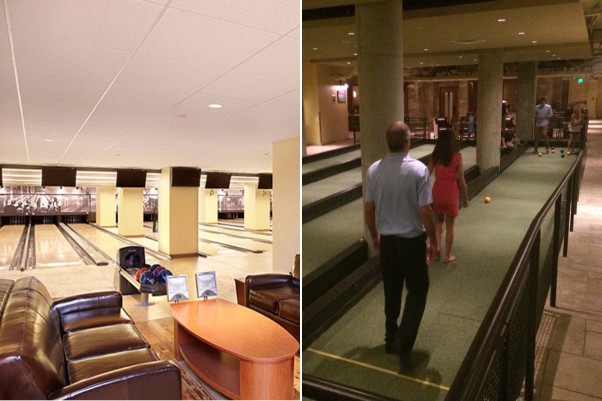 Enjoy a game of bowling or bocce (l to r) before or after dinner. (Photos: Jeff Elkins and Maha N./Yelp)

Before or after dinner, you can bowl a game for $8-$12 per person per hour depending on the day and time. Shoe rental is $5 and comes with a free pair of Pinstripes socks. Bocce is $5 per person per hour, except from 5 p.m.-close on Friday and Saturday when it is $10 per hour.

Another 32,000-square foot location is scheduled to open in fall 2017 in the second phase of the Pike & Rose development at the intersection of Old Georgetown Road and Rockville Pike in Rockville with 14 bowling lanes and 10 indoor and outdoor bocce courts.