Jardenea restaurant, 2430 Pennsylvania Ave. NW, is a hidden gem. It is located inside the Melrose Georgetown Hotel, but there is no sign alerting passersby to its existence. Even in the hotel’s lobby, there is no sign so it is mostly a dining destination for hotel guests or theater goers to the Kennedy Center. 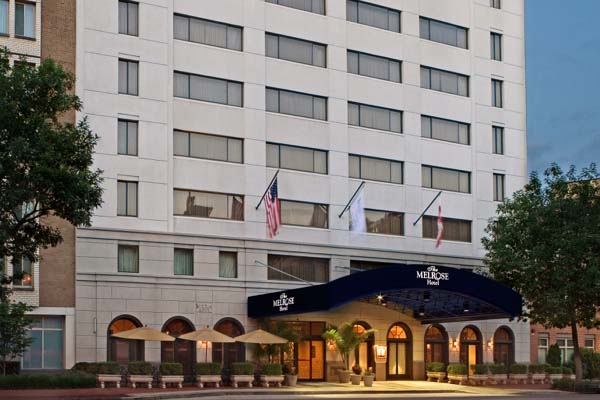 Jardenea restaurant is inside the Melrose Georgetown Hotel in Foggy Bottom. (Photo: Mark Heckathorn/DC on Heels)

The space is clean, crisp and airy, decorated in shades of whites and blues with ceramic and mirrored accents, and Victorian furniture. The lobby dining area is filled with tufted couches, books and two communal tables for after work happy hour. The main dining room is separated with framed, hanging glass etched with chandeliers. Tables are decorated with centerpieces of potted herbs. 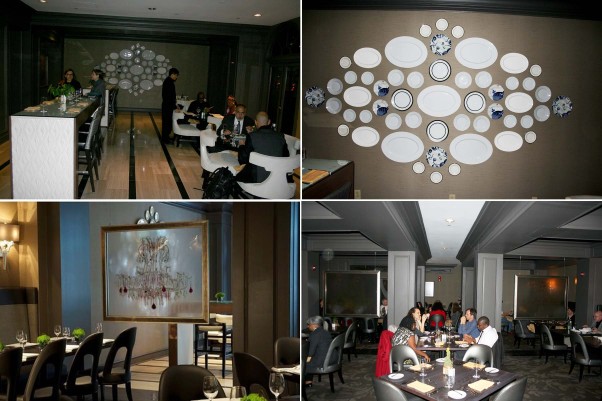 The restaurant opened in November 2012 with executive chef Nate Lindsay, an import from Jardenea’s sister restaurant Azurea located in the One Ocean Resort in Atlantic Beach, Fla. Lindsay is still running the kitchen today serving American farm-to-fork cuisine. The restaurant gets as much of its food as possible from local farms, purveyors and artisans. The menu is seasonally driven with a few mainstays available year-round. Items on the menu are marked when they are gluten free or when the dish can be prepared vegetarian. 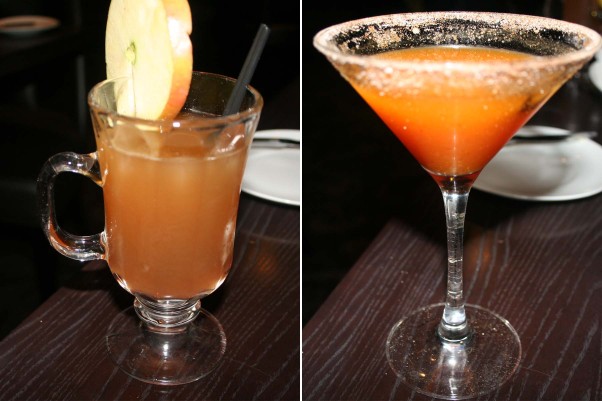 A friend and I visited last month to check out the fall menu. We started with the restaurant’s fall cocktails, all priced at $12. I ordered the Rum cider made with Bacardi rum, apple and cranberry puree and McCutcheon’s sweet cider. It tasted just like a crisp fall day. My guest ordered the pumpkin spiced martini made with One vodka, pumpkin puree, lemon juice and cinnamon simple syrup. This one didn’t quite hit the spot. It was kind of like drinking spiked pumpkin pie. Not that it was bad, but it wasn’t a flavor not meant to be drunk and is better on the plate. 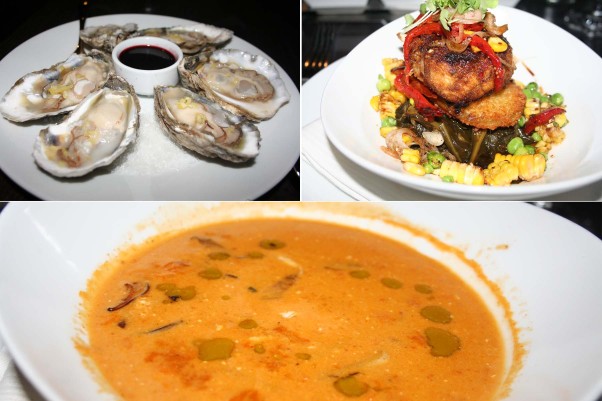 Appetizers include the Barren Island oysters on the half shell (clockwise from top left), the Maryland crab cake and the Chesapeake Bay crab bisque. (Photos: Mark Heckathorn/DC on Heels)

I started my meal with the Chesapeake Bay crab bisque, which was excellent. It’s made with big pieces of crab, Basciani Farms shitake mushrooms, sherry cream and chive oil. My friend ordered the Maryland crab cake with ham hock braised collard greens, Appalachian corn, ember roasted peppers and friend green tomato, which was also delicious. The staff also insisted we try the Barren Island oysters on the half shell. Now I’m not a big fan of oysters, but these were actually tasty. The cured lemon peel and pomegranate-shallot mignonette hid the briny taste and made the oysters much more palatable. The small plates are priced from $9-$18. 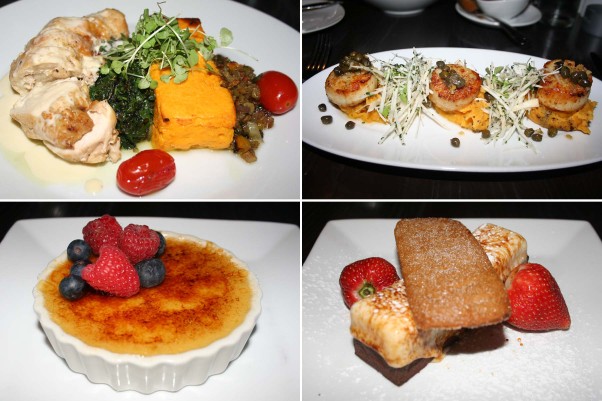 We then moved onto our entrées, which are divide on the menu by where the ingredients come from – flights, fins, fields and farms. I chose the Joyce Farms chicken Chesapeake roulade with lump crab stuffing, sweet potato flan and saute of vanilla scented rainbow Swiss chard. The sweet potato flan was excellent – kind of a stiff casserole. My only complaint the whole night was that there wasn’t enough of the crab stuffing in the chicken. My guest ordered the hand-picked diver sea scallops, which were served on butternut squash mousseline with beurre noisette, preserved lemon, capers and celeriac slaw. It is another sure fire choice. Main plates are priced from $24-$32.

We ended our meal with cappuccinos and dessert. I went with the toasted s’mores made with a rich chocolate mousse, ginger graham cracker and toasted marshmallow, while my friend had the butterscotch crème brule with soft cinnamon Chantilly and fresh berries. Both made the perfect ending to our meals. Desserts are priced from $6-$10.