After a delay, Texas Jack’s Barbecue, 2761 Washington Blvd., Arlington will open at 4 p.m. today on the outskirts of Clarendon in the former Tallula/EatBar space and Whitey’s Restaurant before that.

The 145-seat restaurant is named for “Texas Jack” Omohundro who was born near Palmyra, Va., in 1846 and not the style of barbecue it serves, said co-owner Steve Roberts. Texas Jack was a great American cowboy as the Civil War was ending, Roberts said. He was also a scout, teacher, journalist and actor who was in movies with “Buffalo Bill” Cody.

Inside the 6,700 square-foot restaurant, a large open kitchen offers eight counter seats and is the backdrop for the dining room. Tallula’s velvet curtains and plush banquettes have been replaced by reclaimed wood, industrial-looking metal accents and rope. The space, designed by the Akseizer Design Group, is divided into the main dining room with individual tables and one long 20-seat communal-style table in the center, the 14-seat bar and lounge and a private dining room that can seat 35. Once warmer weather comes back, there will also be a 26-seat patio. 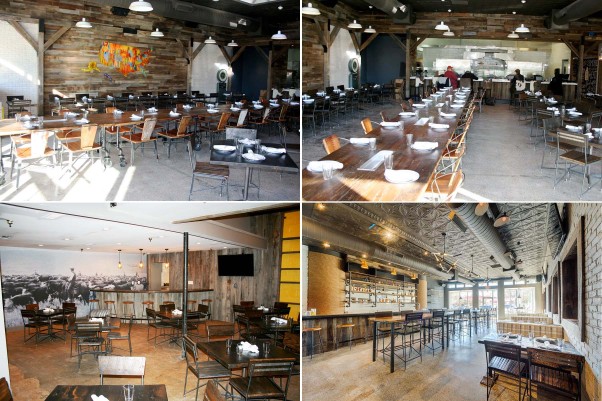 Inside, the restaurant is divided into the main dining room (clockwise from top left), open kitchen, bar and lounge, and a private dining room. (Photos: Mark Heckathorn/DC on Heels)

All the furnishings were made especially for Texas Jack’s from reclaimed wood from Maryland, Virginia and Pennsylvania, Roberts said. From the depth of the seat or the angle of the backs tor the rolling communal tables, classic enamelware and matching enamel light fixtures, everything is custom designed. The wall are white painted brick and bar stools are covered in white and brown-spotted cowhide. Pops of color come from white and yellow plaid booths, a yellow accent wall and a colorful mural of the United states

Executive chef and pitmaster is Matt Lang, most recently sous chef at Hill Country Barbecue. Before that, he had worked at Pearl Oyster Bar and Fette Sau, both in New York. Lang won Food Network’ Best in Smoke in 2011, where he competed against barbecue giants like Famous Dave, Chris Lilley and Brad Orrison.

All the meats are hormone-free, antibiotic-free and raised humanely, and smoked in-house in two smokers using oak wood. Lang said the brisket is smoked for 11 hours overnight and the pork for 10 hours. Ribs are smoked for 3 ½-4 hours in the morning and chicken for about 1 ½ hours. All the barbecue is dry-rubbed with sauce served on the side. 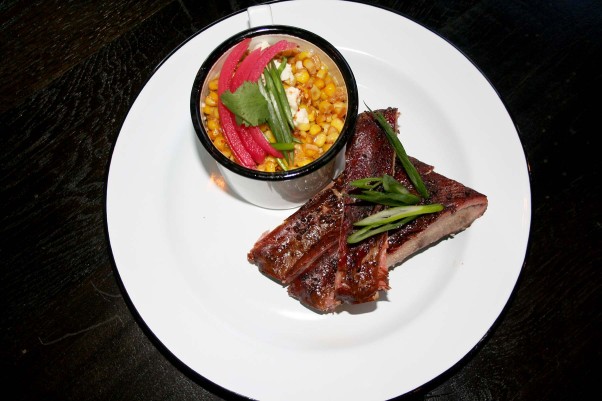 There will be a separate bar menu with dishes such as spicy Mexican-style shrimp cocktail; no masa sope style smashed fried potatos with beans, pulled pork and cheese; nachos with beans, pulled pork or brisket, white queso, crema, salsa verde and salsa roja; chilaquiles, a vegetarian version of nachos; kale Caesar salad with croutons and parmesan; a classic double burger with American cheese, lettuce, tomato and piquin chile mayo; a no meat burger with wheat berry, shiitake, porcini and chickpea; pork sandwich with not so spicy coleslaw and Sriracha pickles; brisket sandwich with a fried egg, queso blanco and poblano peppers; and smoked tofu tacos. The bar menu ranges in price from $8-$12.

Assistant general manager and beverage director Remzi Yilmaz, formerly of Hill Country, will offer 12 local craft beers on tap priced as well as canned beers from $6-$10, keg wines available by the glass for $8-$12 and carafe for $12-$18 and a selection of 80 bourbons and ryes arranged and labeled by state.

Texas Jack’s Barbecue is open from 4 p.m.-2 a.m. daily, with the kitchen closing at 1 a.m. Weekend brunch and lunch service will be added later.