Lionsgate’s The Hunger Games: Mockingjay – Part 2 took in $52.00 million over the three-day weekend (Nov. 27-29) to remain in first place. The final chapter of the young adult blockbuster franchise starring Jennifer Lawrence declined 49 percent from its opening weekend. The film is showing stronger holding power than last year’s The Hunger Games: Mockingjay – Part 1, which fell 53 percent in its second weekend to gross $56.97 million. Mockingjay – Part 2 has grossed $198.55 million in 10 days. The film is currently running 12 percent behind the $225.68 million 10-day take of Mockingjay – Part 1 and should continue to make up some ground in the comparison going forward. It took in $75.98 million over the extended five-day holiday period. 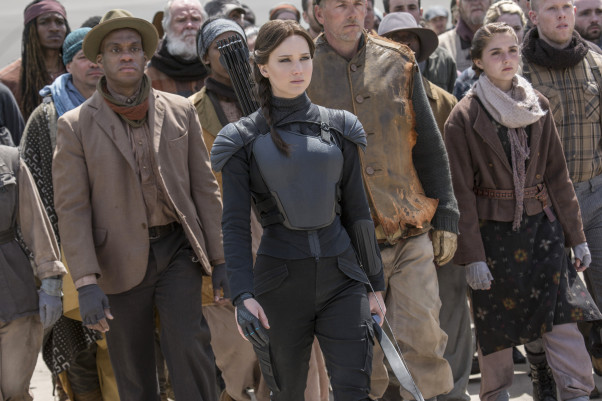 The Hunger Games: Mockingjay — Part 2 finished in first place at the box office for the second week in a row.
(Photo: Murray Close/Lionsgate)

The Good Dinosaur opened in second place with an three-day take of $39.16 million. The latest 3D computer animated film from Walt Disney Studios and Pixar debuted below expectations and delivered the lowest opening weekend performance for a Pixar film since the $33.26 million take of A Bug’s Life in 1998. When adjusting for inflation the three-day weekend gross for The Good Dinosaur was the lowest ever for a Pixar film. At the same time, the movie registered the fourth largest three-day Thanksgiving weekend debut on record without adjusting for inflation. The Good Dinosaur has grossed $55.48 million in five days. Going forward, The Good Dinosaur will probably hold up well thanks in part to the lack of strong family alternatives to Disney’s Star Wars: The Force Awakens throughout the holiday season.

Warner Bros. Studios and MGM’s Creed earned $29.63 million to open in third over the three-day weekend. The critically acclaimed seventh installment of the Rocky franchise outpaced expectations with a strong five-day start of $42.12 million. Creed was also quite back-loaded for a non-holiday opener aimed at adults over Thanksgiving weekend. That is a good early sign for the film going forward. Without taking inflation into account, Creed registered the 10th largest three-day Thanksgiving weekend debut on record. Creed opened 93 percent ahead of the $21.85 million five-day pre-Christmas start of 2006’s Rocky Balboa. However as a Thanksgiving release, Creed is likely to be more front-loaded than Rocky Balboa was. In a month full of wide releases that have failed to live up to expectations, Creed already looks to be an exception to that trend.

Spectre claimed fourth place with a three-day take of $12.89 million. The latest installment of Sony Pictures’ and MGM’s James Bond franchise was down 14 percent from the previous weekend. That represented a very solid holiday hold for the film, especially given the strong start of Creed. Spectre has grossed $176.13 million in 24 days. That places the film 16 percent ahead of the $151.62 million 24-day take of 2008’s Quantum of Solace and 28 percent behind the $245.59 million 24-day gross of 2012’s Skyfall. Spectre took in an estimated $18.15 million over the five-day period.

The Peanuts Movie rounded out the weekend’s top five with $9.75 million. The 3D computer animated adaptation from 20th Century Fox and Blue Sky fell 26 percent from the previous weekend. That represented a significant decline for a family film over Thanksgiving weekend, especially given the lower than expected start of The Good Dinosaur. The Peanuts Movie has grossed $116.80 million in 24 days. The five-day holiday take for the movie was $13.64 million.

On the heels of last weekend’s underwhelming start, Sony Pictures’ The Night Before held up nicely last weekend with an estimated sixth place take of $8.38 million. The R-rated comedy starring Joseph Gordon-Levitt, Seth Rogen and Anthony Mackie was down 15 percent. The Night Before has grossed $24.28 million in 10 days and is likely to continue to hold up well through the holiday season. It took in $11.72 million over the five-day period.

Meanwhile, 20th Century Fox’s Victor Frankenstein was lifeless last weekend with a 12th place start of just $2.47 million. The horror film starring Daniel Radcliffe and James McAvoy has only managed $3.57 million through its first five days of release. The movie opened well below modest expectations and won’t stick around in theatres long after its poor start.