Scientists at Virginia Tech’s Carilion Research Institute have uncovered a mechanism in the brain that could account for some of the neural degeneration and memory loss in people with Alzheimer’s disease. 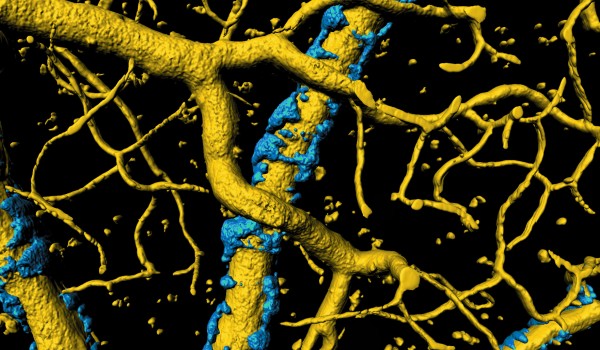 Virginia Tech scientists have uncovered a mechanism in the brain that could account for some of the neural degeneration and memory loss in people with Alzheimer’s disease. A buildup of misfolded proteins causes an exoskeleton (in blue) to form around blood vessels (in gold) in the brain. (Illustration: Virginia Tech)

The researchers, together with scientists at the University of Alabama at Birmingham School of Medicine, discovered that a common symptom of Alzheimer’s disease — the accumulation of amyloid plaques along blood vessels — could be disrupting blood flow in the brain. The results were published recently in the journal Brain.

“We’ve always been interested in how glial cells interact with blood vessels,” said Harald Sontheimer, director of the Center for Glial Biology in Health, Disease and Cancer at the institute and the paper’s lead author. “Astrocytes are the most populous cell type in the brain and even outnumber neurons.”

Sontheimer also noted the importance of astrocyte function in the brain. “Astrocytes serve many support functions, such as shuttling nutrients from blood vessels to nerve cells or removing their waste products,” said Sontheimer. “They also control the diameter of blood vessels to assure proper nutrient and oxygen delivery to the brain and maintenance of the blood-brain barrier. In response to injury and disease, however, astrocytes become reactive and change many of their supportive properties.”

The exoskeleton is known as a vascular amyloid. Its inelasticity might result in lower blood flow, which could account for Alzheimer’s symptoms, such as memory lapses, impaired decision-making and personality changes. 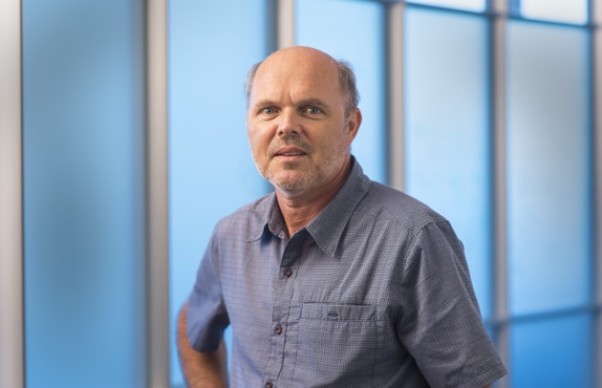 “Vascular amyloid may be the culprit in Alzheimer’s disease symptoms, especially considering that the amyloid exoskeleton might limit the supply of oxygen and glucose to the brain regions that need them most,” Sontheimer said. “This could also explain the cognitive decline in people with Alzheimer’s disease, as the disease is associated with reduced cerebral blood flow.”

While the scientists don’t fully understand the role of vascular amyloid in Alzheimer’s disease, they now have a possible therapeutic target to study.

“It may be helpful to remove the deposits to allow for appropriate blood flow,” Robel said. “The problem is we don’t know. It might be harmful to remove vascular amyloid at late stages of the disease; maybe they’re actually holding the vessels together.”

The researchers’ next step will be to examine blood vessels once the amyloid deposits are removed.