Chick-fil-A opened its first stand-alone D.C. restaurant at 3100 14th St. NW at 6 a.m. this morning in the DC USA shopping center where Lime Fresh had been, and the line of people waiting to get in began early the day before. 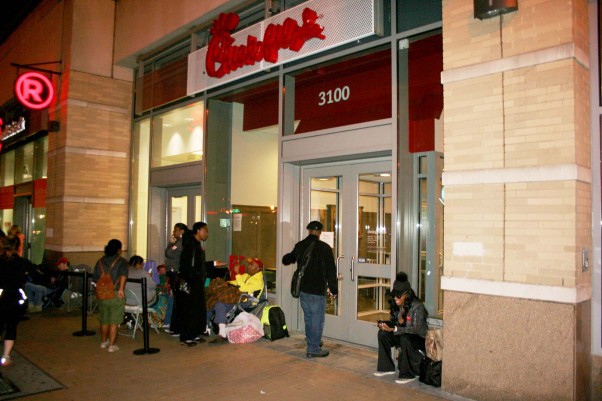 The fast-food chicken chain has several locations in the DMV suburbs and a franchise in Catholic University’s Pryz Food Court, but this is the first stand-alone location in the city. There was also a university-operated franchise in American University’s Mary Graydon Center, but it closed several years ago.

In early October, Chick-fil-A opened its first store in New York City in the Garment District. Atlanta-based Chick-fil-A is a family owned and privately held company founded in 1964 by S. Truett Cathy. The company has more than 1,900 restaurants in 42 states and Washington, D.C. The chain’s sales reached nearly $6 billion in 2014.

“Chick-fil-A’s goal was to make sure that our first urban location had all of the right components: the right mix of suburban-style retail with pedestrian and commuter traffic and certainly the right franchise operator,” Chick-fil-A spokeswoman Brenda Morrow said.

The restaurant features an upgraded interior including subway tile and metals in a variety of finishes and patinas. The vintage-inspired interior includes a community table made of reclaimed timber and other unique custom features such light fixtures made from recycled Coca-Cola bottles and peach baskets. It is built to LEED specifications with water and energy efficiency features, air quality control and waste diversion efforts, among other initiatives. The location seat 70 and has free wi-fi.

While fans lined up outside to win free food, inside employees attended to last minute details.
(Photo: Christina Sturdivant/DCist)

The 3,500-square-foot store “is a perfect location to start our entry into the D.C. market,” said Giancarlo Jimenez, senior manager of real estate at Chick-fil-A. This is one of the chain’s urban locations with no parking and no drive-thru.

“With the D.C. metro being one of most successful markets in the entire chain, I asked, ‘Why aren’t we here in D.C. and how do we get here?'” said Jimenez, who has focused on getting the popular fried chicken purveyor into “markets outside of our comfort zone” since he took over Chick-fil-A’s real estate operations five years ago.

Jimenez wouldn’t discuss any other possible D.C. locations, but Chick-fil-A plans to open three to five more locations over the next five years. The DMV is one of the top five performers for the restaurant.

However ANC 3F commissioner Malachy Nugent told http://www.foresthillsconnection.com/news/anc-3f/in-and-out-in-van-ness-chick-fil-a-and-burger-king/# The Forrest Hills Connection that Chick-fil-A has filed plans for a second stand-alone branch is planned for 4422 Connecticut Ave. NW in Van Ness. It would open in about a year if approved where the rock and roll-themed Burger King is currently located. Nugent said plans call for demolishing the old building and replacing it with a new brick-and-glass structure with a patio and drive-thru.

Back in Columbia Heights, the first 100 customers in the restaurant operated by Jessie Chesson when it opened at 6 a.m. won 52 free Chick-fil-A No. 1 meals, which includes the original chicken sandwich, waffle fries and a drink. Chesson is a native of metro D.C. Chesson received her communication degree at Howard University and her MBA at George Washington University. By noon, about 20 people were in line and by rush hour Tuesday, the line started outside the new Chick-fil-A and wound its way down 14th Street and around the corner onto Irving Street in front of the Bank of America.

Although mot Chick-fil-A openings are more of a carnival with fans camping out the night before, tent was not permitted on the city sidewalks. Also, while previously fan were allowed to come from all over for a chance to be in the First 100, rules were changed in April limiting participation to residents of specific local zip codes – about a two mile radius of the restaurant – to make the event a “community friendly party.” 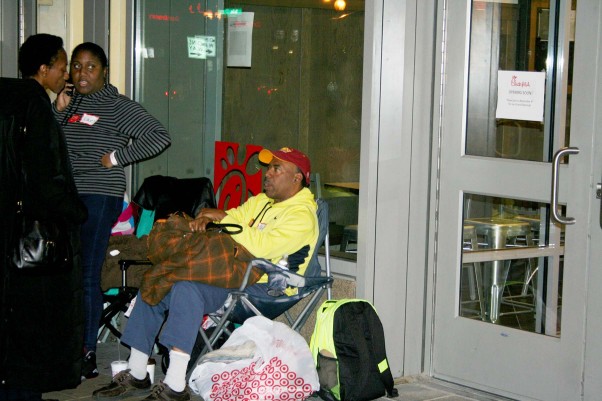 Per contest rules, participants must “remain in their designated spot on the premises until the grand opening of the restaurant.” Jeff Cousins, 60, was the first in line. He came equipped with a lawn chair, snacks and drinks, and a Coleman sleeping bag for the two nights ahead.

“I got in line at 12:45 a.m. (Tuesday),” Cousins told DC on Heels. “I feel sillier each time someone asks.” He is a federal government employee who took the day off to be the first in line. “As a Washingtonian, I’ve been looking forward to this for 30 years. I just fell in love with it the first time I went. To me, it’s a dream come true.” He said he sometimes bike from work downtown to the Chick-fil-A in Crystal City to get treats for his family. “My family and I are big fans,” he said.

Cousins was in line alone, noting that no one was coming to relieve him, but his wife and children would be visiting. “At least the weather’s good,” he said. Inside the new restaurant as workers put the finishing touches on things, there was water, coffee and sweet tea for those in line. The restrooms were also open and those waiting were welcome to use the electrical outlet. Employees are tracking who arrive, when they arrive and ensuring they remain there until opening or they lose their spot. Employees are also served breakfast, lunch and dinner to those waiting to get in as well as provide entertainment and play games, such as rolling an Oreo from your forehead into your mouth or sticking the most corn balls on someone wearing a whipped cream-covered shower cap for prizes.

Others waiting in line worked for non-profit agencies, were Capitol Hill interns and a 55-year-old Navy veteran. Some took a vacation or sick day, other “worked remotely.” There was a 25-year-old robotics engineer who has been to five Chick-fil-A openings and a 60-year-old woman who has been to 25 of the openings along the East Coast. They brought books, iPad, games, laptop, Bible, cards and even a Rubik’s Cube to pass the time.

Winners this morning were awakened about 5:30 a.m. to an employee playing wake up music then marched into the restaurant to the tune of the staff banging pots and pans, then marched out with their digital card for 52 free meals then presumably to bed or work.

But Chick-fil-A isn’t welcomed by everyone. Former mayor Vincent Gray was vocal about not welcoming the controversial chain when it launched a food truck in the city back in 2012 and coined the term “hate chicken” for the restaurant’s financial support of organizations that oppose same-sex marriage and LGBT rights. Cathy died last year and the company’s current president, Cathy’s son Dan T. Cathy, has since said he regrets wading into the political debate over same-sex marriages.

The restaurant is open from 6 a.m.-10 p.m. Monday through Saturday and serves breakfast from 6-10:30 a.m. Like all Chick-fil-A restaurants, it will be closed on Sunday.