The cool, rainy weather of the last week quickly moved the thoughts of DMV residents from summer to fall or even winter. Falling leaves, withering flowers and the rumble of the furnace on a chilly morning puts us in the mood for hearty fall dishes and bring to mind apples, cider, pickled and preserved foods, squash, pumpkin and other fall ingredients. 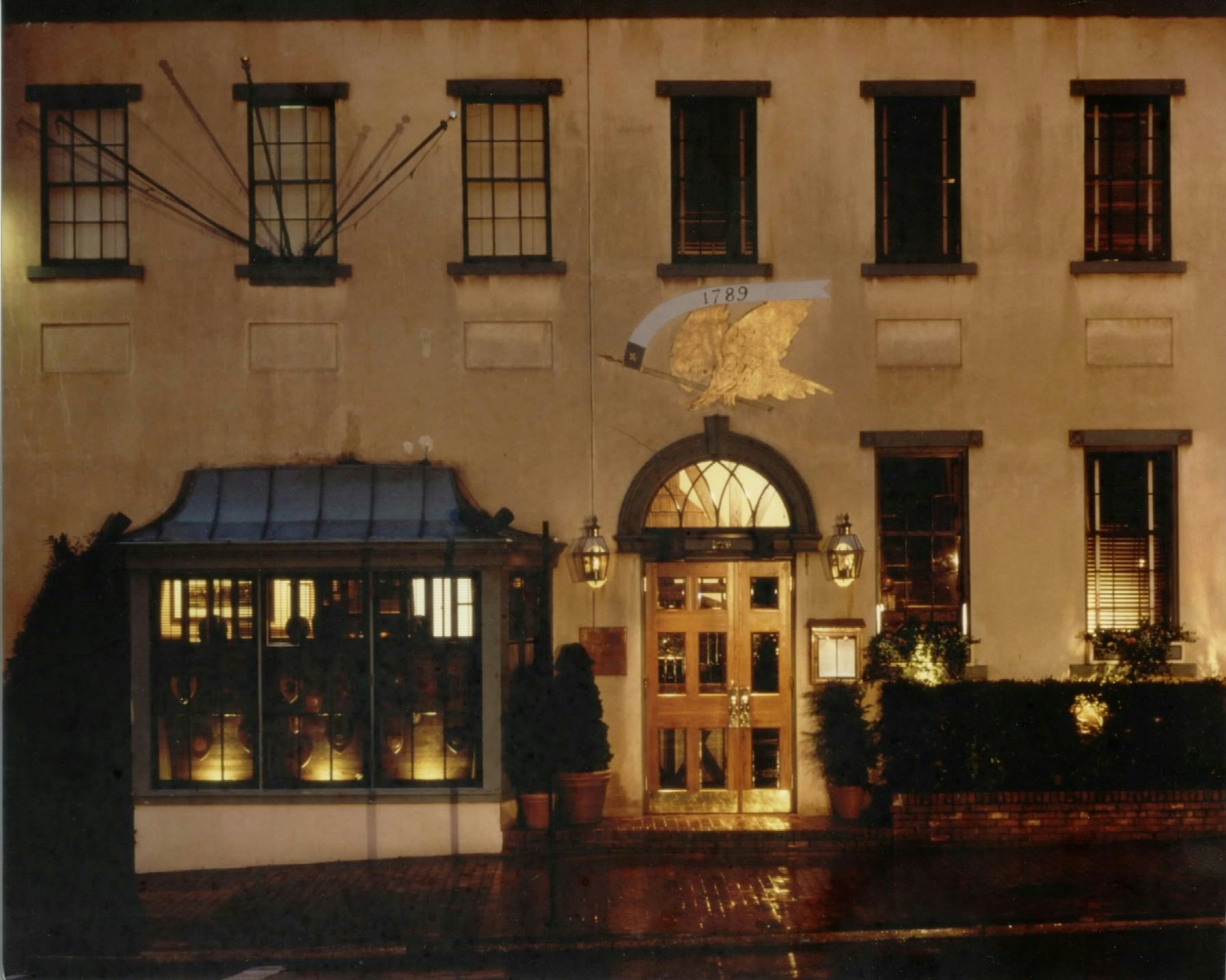 On a cold, rainy Thursday last week, my friend and I headed over to Georgetown to enjoy the new fall items at one of D.C.’s historically-rich dining destinations. Located just a few minutes from the bustle of Georgetown’s M Street, stepping into 1789 is like stepping into history. Named for the year that Archbishop John Carroll – Georgetown University’s founder – purchased the original site of the restaurant, as well as the year the U.S. Constitution was adopted and the year the village of Georgetown was incorporated, 1789 is furnished with working period gas lights, antiques, prints and photos, which create an ambiance that echoes the building’s heritage.

A member of the Clyde’s Restaurant Group, 1789 is tucked inside a Federal-style house across from the historic Car Barns. Covering four floors, the restaurant has the charm and ambiance that only old houses possess. Floors creak, doorways sag, fireplaces are extra-large and low ceilings are all nostalgic. As we walked through the John Carroll room to our table, I wondered what he walls had witnessed over the last 200 years with diners the likes of President Barack Obama, German Chancellor Angela Merkel, former President Bill Clinton and former Secretary of State Madeline Albright, just to name a few. 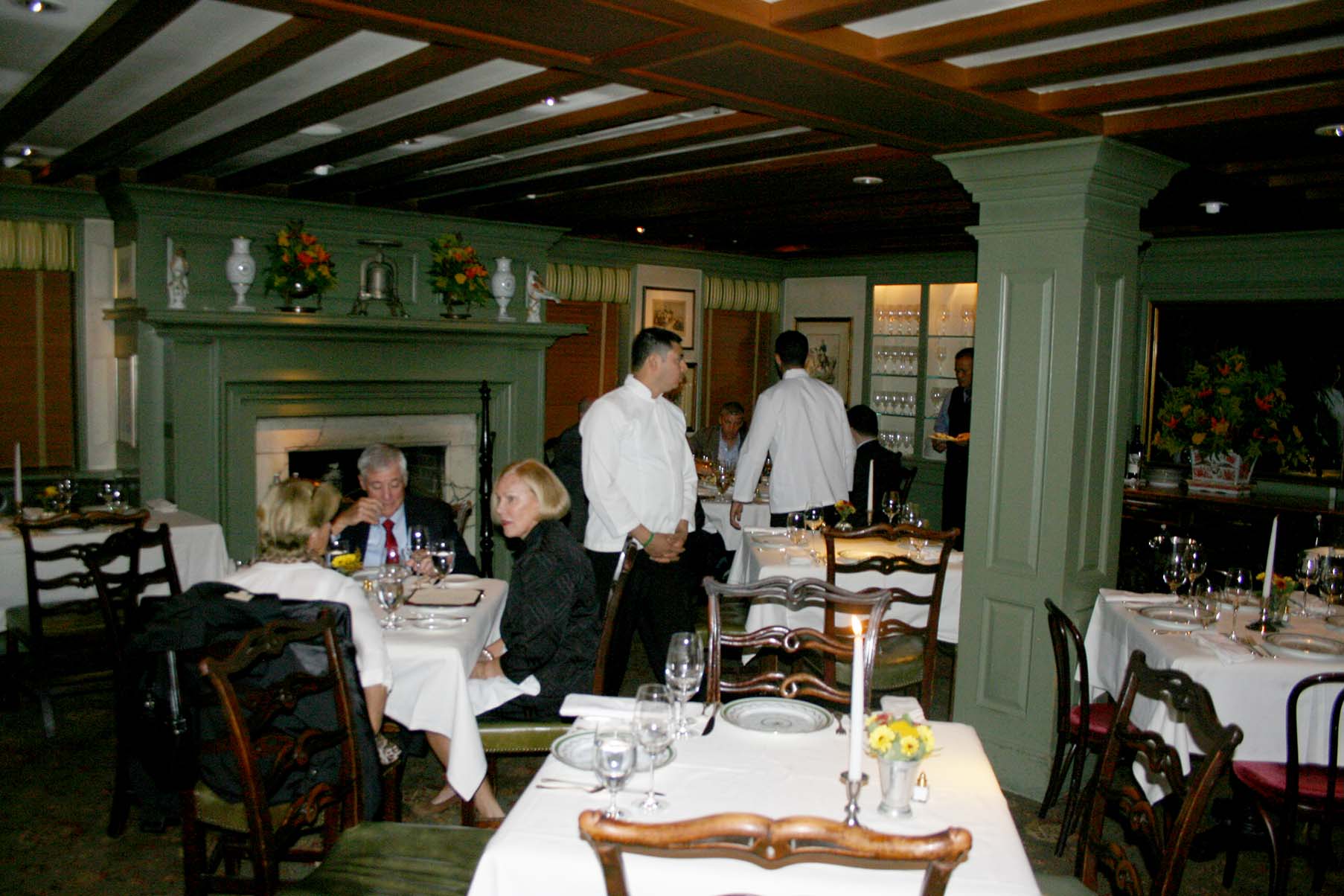 The John Carroll Room is decorated with Currier and Ives prints from George Washington¹s days as president, early maps of the city, and paintings and prints of Georgetown University as well as a huge fireplace.
(Photo: Mark Heckathorn/DC on Heels)

Entering the restaurant, you are greeted by the quaint, charming pub that invites lingering with a glass of wine, especially on a chilly evening. Antiques and furnishings fill the space. The bar itself is a slab of marble that was formerly a part of the production room at the Evening Star newspaper and a Parliament clock keeps time in the corner. In addition to the pub, there are three other dining rooms: the John Carroll Room – the main dining room — Manassas Room and Wickets Room, as well as two rooms for private events—the Middleburg Room and the Garden Room.

Kim, who returned to 1789 just over a year ago as executive chef, began his career there working under then executive chef Ris Lacoste. On the night we were there, the menu anticipated the slight chill in the air with fresh fruits and vegetables such as Asian pears, Gala, Honey Crisp and Jonagold apples, butternut squash and autumnal greens; pungent local blue cheeses and fresh made pasta. 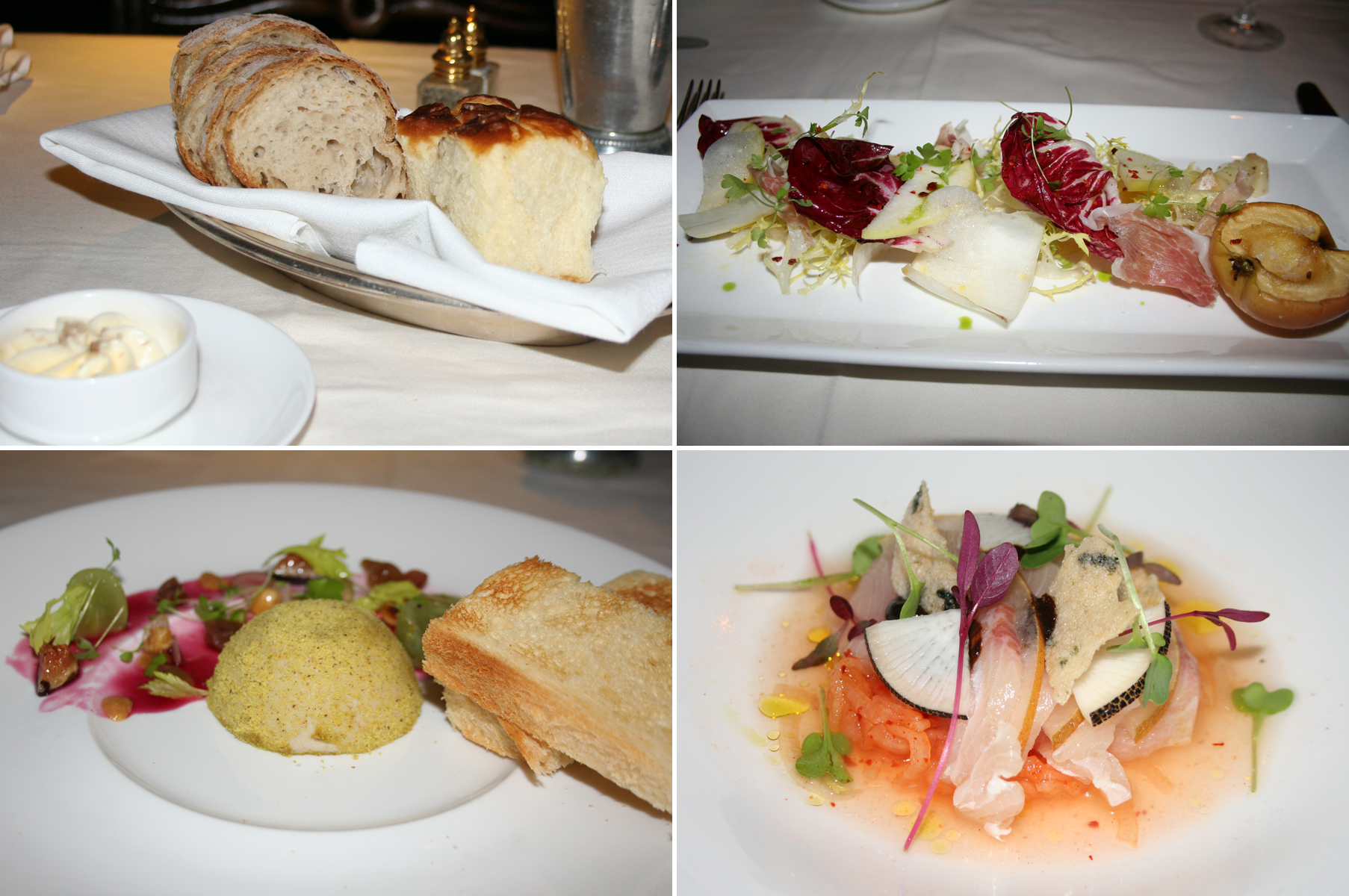 For our first course, my guest chose the hamachi crudo ($17) with pickled daikon and black radish, smoked dashi, Asian pear and a nori rice puff. My friend enjoyed it a lot and even I, who doesn’t like raw fish, found it to be a mellow fish flavor that didn’t overpower the other ingredients. I opted for the apple salad ($14) with Honey Crisp and Jonagold apples, prosciutto, Taleggio cheese, spiced caramel, bitter greens and cider foam. The salad included sweet fresh and baked apples that paired perfectly with the soft cheese and salty prosciutto. Kim also sent out foie gras torchon ($26) for us to try. The foie gras was rolled in pistachio dust and served with Concord grape compote, pickled celery, bruleed fig, candied hazelnuts and brioche toast. Neither of us are foie gras fans, but the grape compote and candied hazelnuts made the duck liver pate palatable, although we both only took one bite. Appetizers range for $14-$26.

The second course was our favorite with the fall pasta dishes. My chestnut tagliatelle ($17) was a perfect autumn dish with porcini mushrooms, roasted butternut squash, shallots and fried sage. It was meaty from the chestnuts and mushrooms and was a bite of autumn on a fork. My friend ordered the pappardelle pasta ($20) with Maine lobster, fennel, Meyer lemon confit and Pernod. It was tasty and perfect for the cold, rainy night. Pasta dishes range from $16-$20. 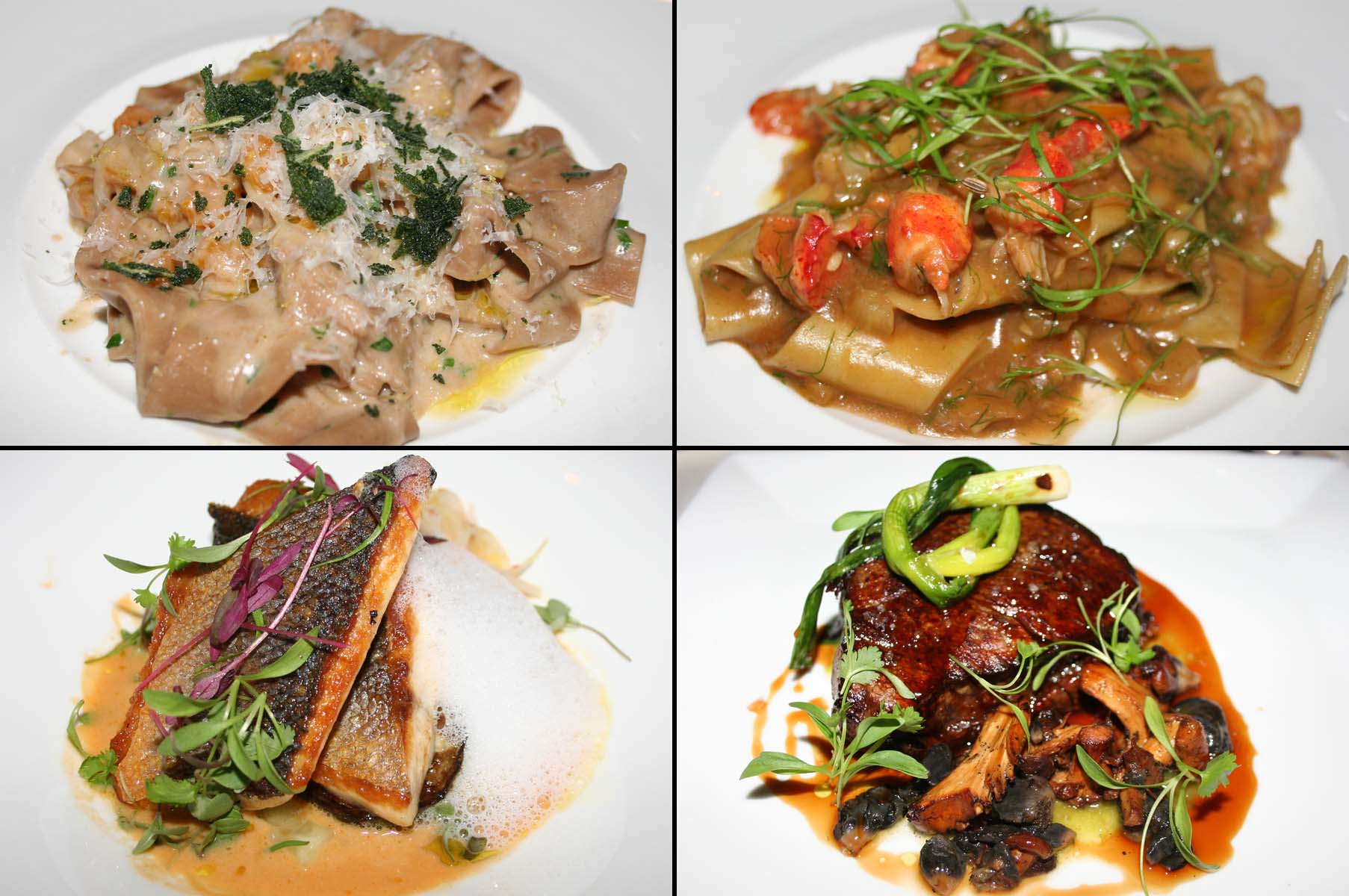 For entrées, I chose the beef tenderloin ($46), which was served with yellow corn, tomatillo puree, huitlacoche, charred scallions and chanterelle mushrooms. It was cooked perfectly and was filling. My friend ordered the branzino ($38), which is also known as sea bass and was served in a coconut-red curry broth with yogurt foam, golden lentils, charred cucumbers, green papaya, pickled onions and toasted rice powder. It was tasty and not fishy with a Thai twist. Both were excellent choices and worth ordering again. Entrees range from $28-$46, although we hear some additions – like beef Wellington – will be coming soon.

For our cheese course, we chose Kunik (all the cheese options are $12), a triple crème soft cheese made with goat milk and Jersey cow cream. It was served with apple butter and honey hazelnuts. It was the perfect choice to cleanse our pallets and to let our entrées begin to digest before having dessert. 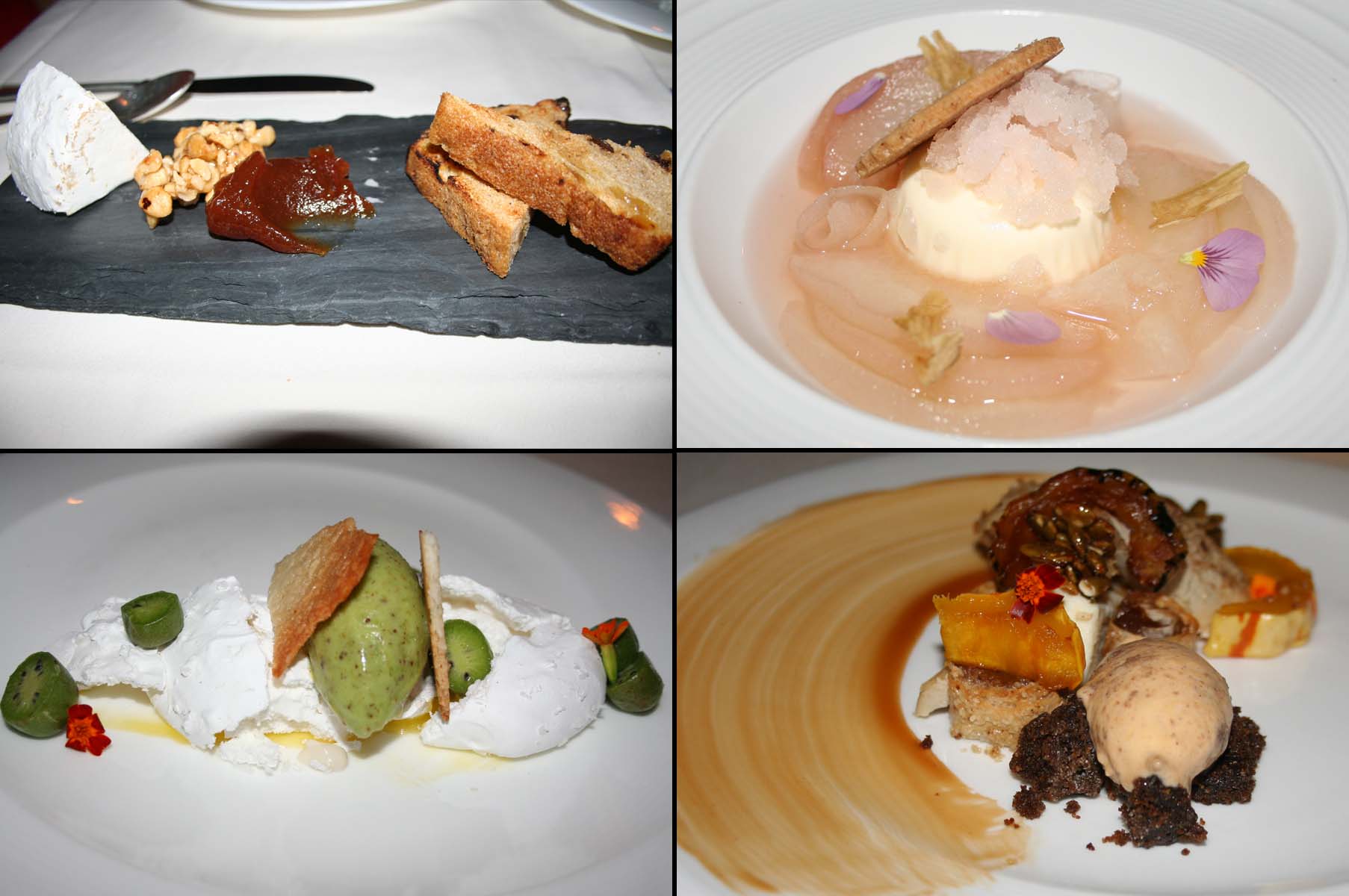 And when it was time to order dessert (all priced at $10), we couldn’t decide on just two, so we ordered three. The pumpkin walnut strudel was my favorite fall dessert with maple roasted delicate squash, goat cheesecake, molasses stout croutons, spiced pepitas, walnut phyllo and sweet potato-Speculoos ice cream. It was the perfect ending to the fall delights. We also sampled the rosé poached pear, crème fraîche panna cotta, Asian pear, ginger chips, spiced cookie and ginger-lime granite and the kiwi-berry pavlova with toasted coconut meringue, lime curd, cashew cream, coconut tuile and kiwi-berry sorbet. I don’t think we could have gone wrong with any of Petri’s desserts.