Duck Donuts Bring the Beach to the DMV

In the immortal words of Homer Simpson: “Doughnuts. Is there anything they can’t do?”

On a trip to Virginia Beach last weekend, I discovered Duck Donuts. Only a fool wouldn’t want one of these heavenly-holed pastries. 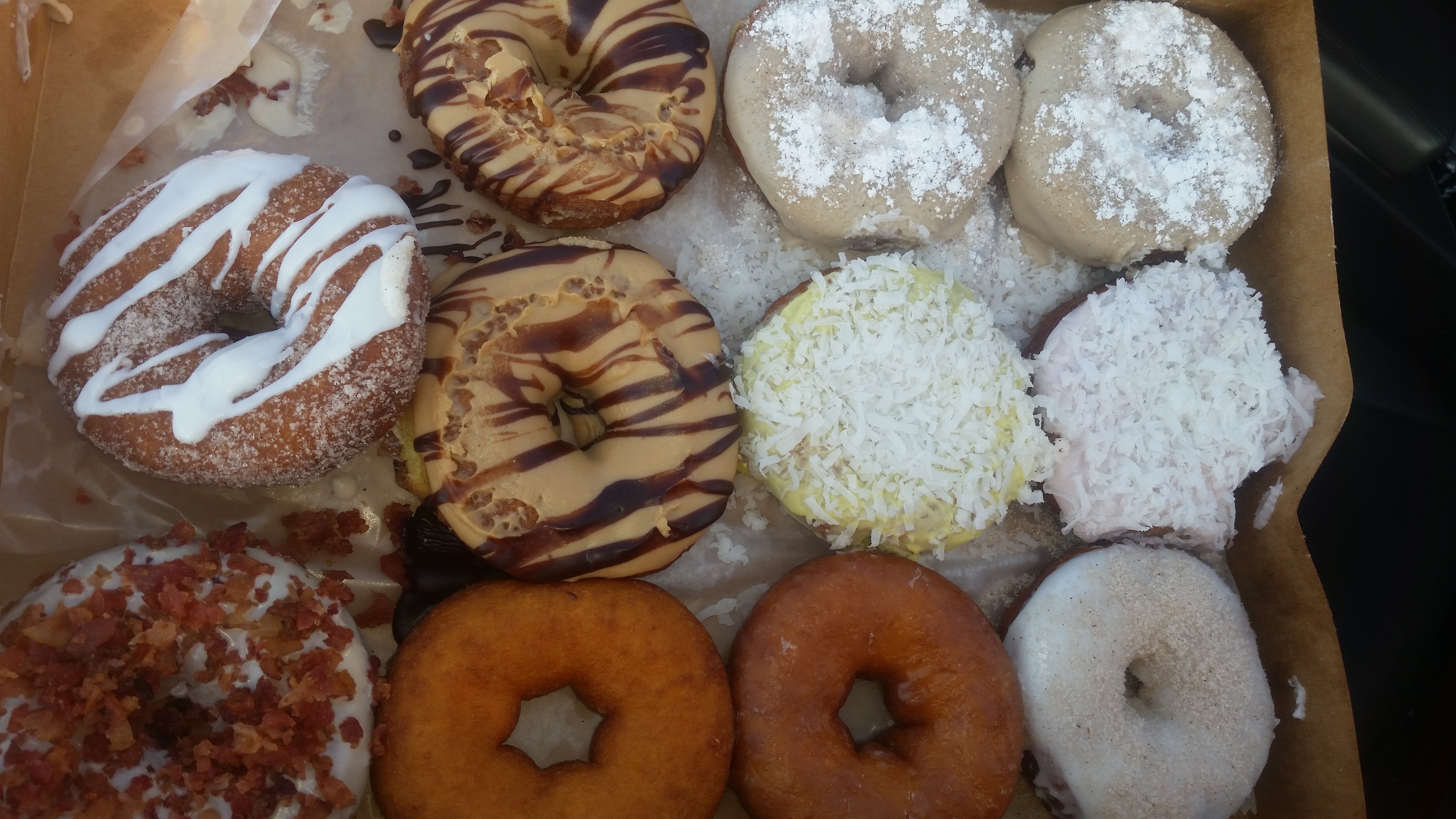 Doughnuts at Duck Donuts are made fresh to order and given to the customer still warm. (Photo: Mark Heckathorn/DC on Heels)

I spent a long weekend in a rented house on Sandbridge Beach in Virginia Beach, enjoying four days without email, a cellphone or much else. Just friends, a pool, a hot tub, the beach and great weather. On Sunday night, we drove 15 miles north to the resort section of the city where the boardwalk is located. Although the boardwalk, which is lined with hotels and fancy restaurants instead of Thrasher’s Fries, Kohr Bros., Fisher’s caramel corn or Candy Kitchen like Ocean City, Md.’s boardwalk, was disappointing at best. But on our drive, we passed a Duck Donuts. And although it was closed, a friend raved about them and encouraged a stop on the way home to get some.

Duck Donuts is a small chain of stores founded in Duck, N.C. by Robin Griffith and Russell DiGilio in 2006. There are now 15 stores in Delaware, New Jersey, North Carolina and Virginia, with another four scheduled to open.

When we stopped, it looked like any doughnut shop with a few seats at a counter, a cashier and a few clerks. But one nibble on a sugar-cinnamon sample, and we were hooked. They were warm, light, slightly crispy and not greasy, unlike the cake donuts we are accustomed to in the DMV. Duck Donuts offers custom doughnuts with homemade icings, unusual toppings and atypical flavor combinations, setting them apart from their doughnut-selling competition. 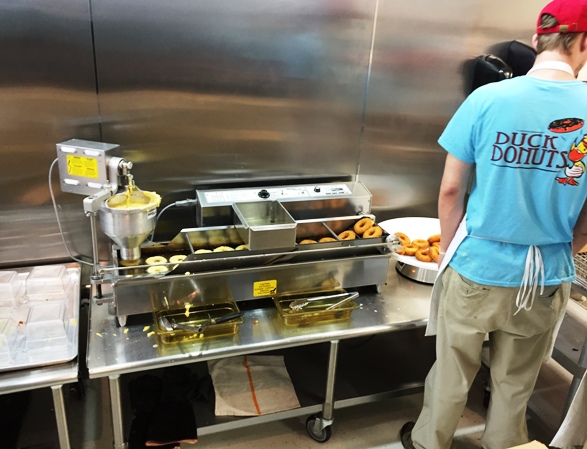 An automated machine drops rings of cake batter into the hot oil each time a customer places and order. (Photo: NC Triangle Dining)

The cashier explained that each doughnut is made to order, starting with a freshly fried yellow cake doughnut. In the fall, they add a pumpkin doughnut. An automated machine drops rings of cake batter into the hot oil. The doughnuts float along cooking before landing in a large bowl. They sit for a moment cooling and waiting to be decorated by an employee.

Then you can choose your coating – bare, cinnamon sugar, powdered sugar, glazed, vanilla icing, chocolate icing, lemon icing, peanut butter icing, maple icing or strawberry icing. You also choose toppings such as shredded coconut, chocolate sprinkles, rainbow sprinkles, chopped peanuts or bacon (the most popular). There are also daily specials like the Reese Cup with peanut butter icing and a chocolate drizzle, the orange creamsicle with orange icing and a vanilla drizzle, the Almond Joy with chocolate icing topped with coconut and peanuts, the Beach with vanilla icing, cinnamon and sugar, and French toast with maple icing, cinnamon and powdered sugar. 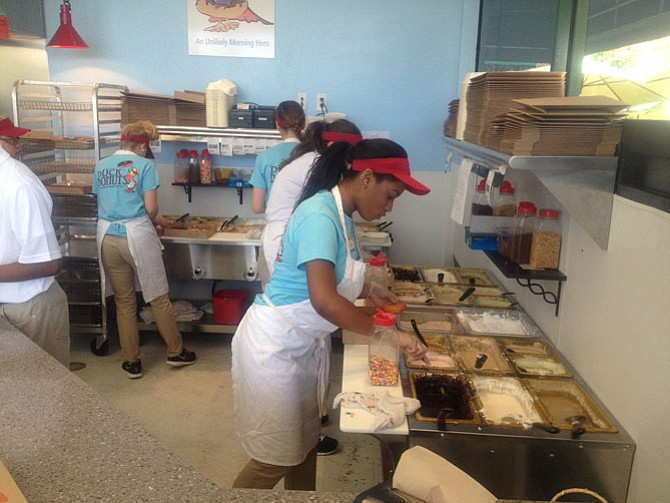 Although they are tasty cold, the best way to eat them is as soon as you get them when the doughnuts are hot and the icing is gooey. My favorite was the doughnut with maple icing and bacon – a lot of real, fried bacon.

I was delighted to find two new locations that opened in the DMV this year with another scheduled to open. There is one located at 10694 Fairfax Blvd., Fairfax, and another in the BB&T Center, 300A Eldon St., Herndon. Both are open from 6 a.m.-7 p.m. daily. A third is set to open in the Lee Harrison Shopping Center, 211 N. Harrison St., Arlington, later this year. 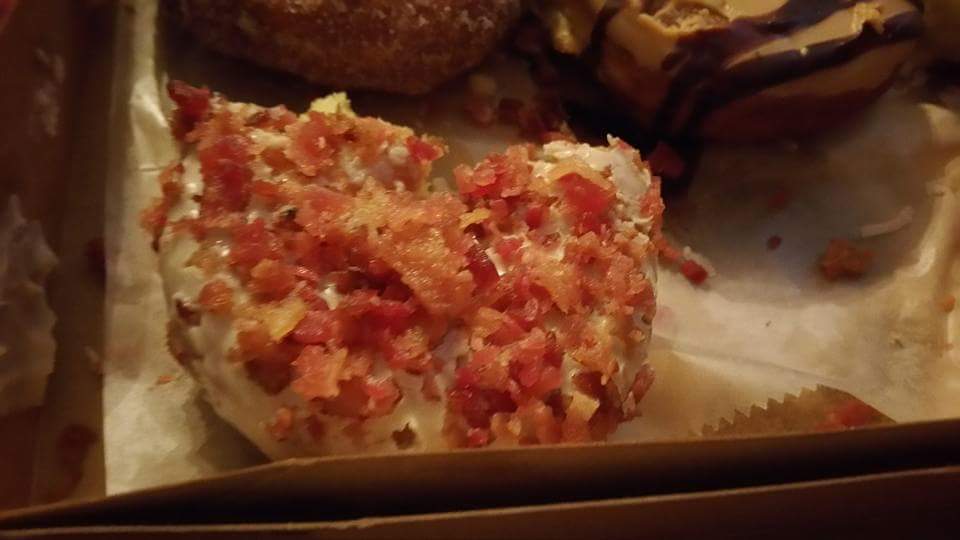 The maple bacon doughnut s to die for.. (Photo: Mark Heckathorn/DC on Heels)