Tysons Corner was a good location choice for the new Founding Farmers. Some big name chefs haven’t had as much luck out in the Virginia suburb, but Founding Farmers has found that not to be the case. 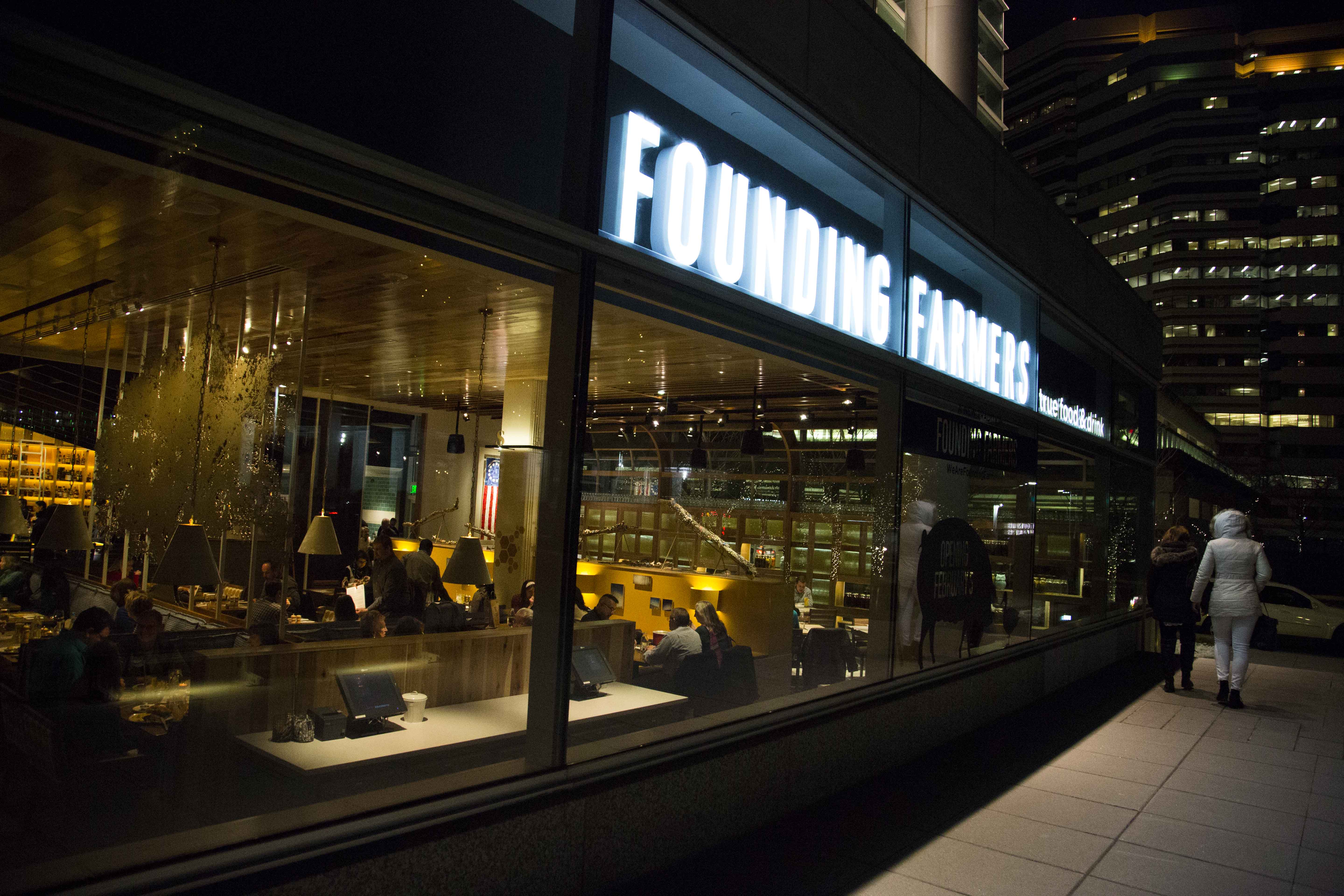 Richard, Michel Richard’s third area restaurant that opened in 2010 in the Ritz-Carlton and closed about two years later in space that previously was filled by Maestro by Fabio Trabocchi from 2001-2007. It is the same space at the Ritz where José Andrés America Eats Tavern opened last fall.

Fellow culinary names Bob Kinkead, who owned Colvin Run Tavern, and Jonathan Krinn, who operated Inox, have also tried and failed in Tysons Corner. Those before Richard had warned that “no one will want to fight the suburb’s notorious traffic.” Even Rainforest Café, which has locations across the U.S. including Disneyland, Disney’s Animal Kingdom, Disney World and the Mall of America, as well as internationally in Tokyo, London, Paris, Dubai and Niagra Falls, couldn’t make in Tysons Corner Center and closed in 2007.

The list goes on and on: Bertucci’s Brick Oven Restaurant, Konami, Narita Japanese restaurant, Panache, Ega, Koi Asian Bistro, Vino Volo and on and on But those restaurants all tried to make a go of it before Metro’s Silver Line opened.

The trains bring the city dwellers out to shop at Tysons Corner Center and Tysons Galleria and also take the suburban dwellers to their jobs in the city. Early last month, Founding Farmers opened its third and biggest location near Tysons Galleria where Krinn’s Inox had been. A restaurant spokeswoman said the restaurant is off to a roaring start with about a third of its diners trekking out from either D.C. or Maryland. 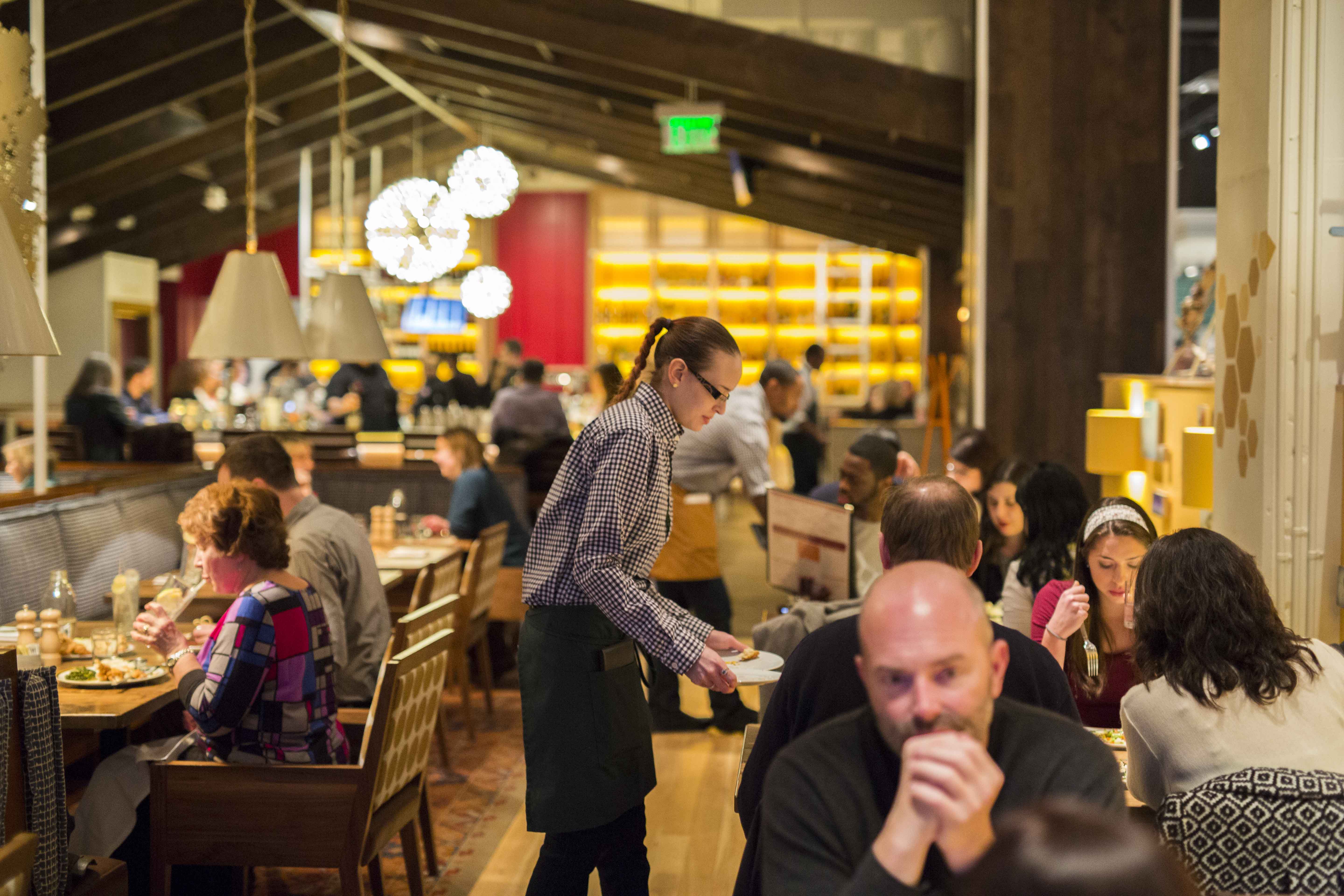 “We estimate that approximately 65 percent of the guests that dine at Founding Farmers Tysons are locals from Fairfax County, in and around Tysons,” Motruk said. “Some portion of that number are guests that live elsewhere, but work in Tysons (like about 100,000 others), but we also know that there are only about 18,000 people that actually live in the 10-mile radius of Tysons Corner. The remaining 35 percent of guests are coming from Maryland or D.C., but there isn’t a true tracking system or documentation of that info – we’re recognizing previous guests from other restaurants and some guests are volunteering that information.” 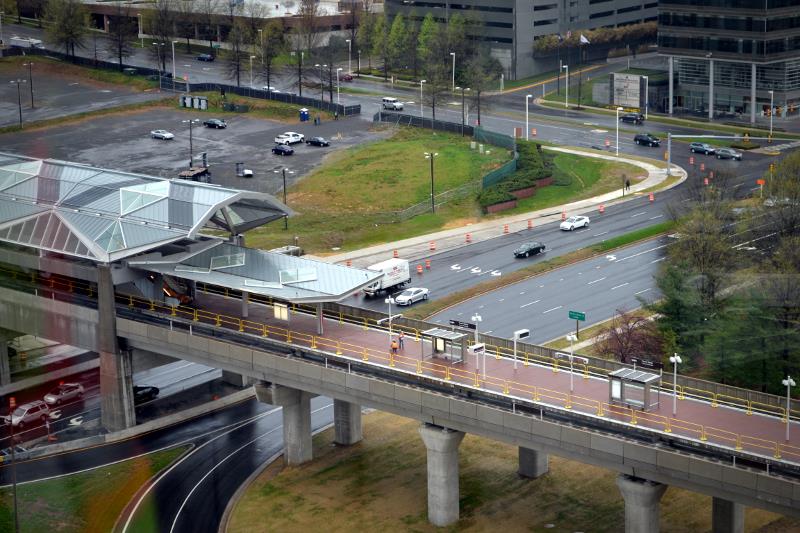 From the Tysons Corner Metro platform, you can see the building that houses Founding Farmers (top right) as well as PriceWaterhouse Coopers and HSBC bank. (Photo: The Tysons Corner)

The restaurant doesn’t track how diners get to the restaurant, but Motruk believes many come from Metro along with much of the staff.

“We believe that we were in the right place at the right time, primarily because of the Silver Line. The central Tysons Corner station just one block from our restaurant has made it that much easier for our staff and employees to get to work in an efficient and cost-effective manner. Many of the servers, front of house staff, kitchen staff and some managers use the metro to get to Founding Farmers Tysons,” she said.

“We’re not as solid on the Metro being a means for our primary guest/target demographic to get to the restaurant, however. We know that the Reston station out West on the Silver Line is the busiest on that line in Virginia, so the logic is that the people that use the line from that station are headed right downtown, bypassing the Tysons stop,” Motruk said. “But, we do see a LOT of people walking past our restaurant, coming from the Metro, so by further deduction some small percentage of those guests would eventually be in our restaurant. If nothing else, it’s a great landmark for us to use to direct guests to the restaurant.”