SER restaurant, 1110 N. Glebe Road, Arlington had its soft opening in Ballston on Mar. 5 in the midst of Thursday’s snowstorm. The grand opening will be this coming Thursday, Mar. 12. 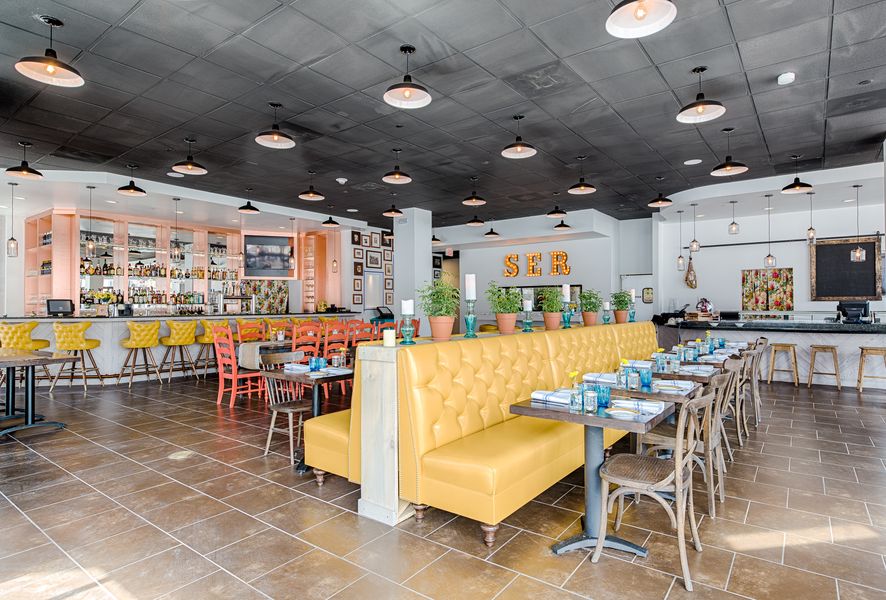 The dining room at SER in Ballston evokes the feel of a Spanish home. (Photo: Rey Lopez)

The restaurant, owned by Christina Campos-Condon, her husband, Javier Condon, and with chef Josu Zubikari, won the Ballston Business Improvement District’s 2014 Restaurant Challenge. As the winner of the challenge, SER received a year of free rent and a $245,000 interest-free loan.

You won’t find any tapas on the menu at (“Simple, Easy, Real” and a play on the Spanish verb “to be”), but traditional Spanish dishes like paella, chicken and ham croquetas, and roast suckling pig. The menu includes comfort foods such as cochinillo (roasted suckling pig), bacalao al pilpil (salted cod in olive oil emulsion), txipirones en su tinta (squid in its ink), carrilleras de Iberia (braised pork cheeks) and sopa Donostiar-ra (fisherman’s soup). The paella will be served tableside and Iberico will be carved tableside. A salad cart will display several kinds of lettuces, vegetables, proteins and dressings that diners can mix-and-match and watch get made in front of them.

Main dishes are divided into three sections: “from the market” that use seasonal, local ingredients; “from our travels” such as a cheese burger and gluten-free angel hair pasta with lime zest and caviar; and “from our grandmothers” featuring family recipes. There will also be daily specials that highlight the country’s traditional dishes, as well as a “menu del dia” – a prix fixe three-course menu that changes daily based on what Zubikarai finds at the market.

During lunch, guests can choose between a full menu with seated service or SER’s “Lunch Shop” featuring house-made sandwiches, soups and salads to go.

The wine list consists of both Old and New World selections, with more than half of the “everyday” bottles less than $40 while the dozen or so “celebratory” wines range from $60-$120. The beer selection includes mostly local brews with a few from Spain, and the cocktail list is the result of several bar crawls throughout Spain and includes drinks made with sherry as well as coffee.

Campos-Candon designed the interior on a tight budget with big wooden tables, turquoise chandeliers, coral-colored chairs, and chartreuse-colored bar stools. Like someone’s house, photos of family members and Kickstarter investors and flower-patterned curtains hang in the doorways. The 5,000 square-foot restaurant seats 140 with a seasonal 100-seat, dog-friendly patio and features and open kitchen counter, cheese and charcuterie bar and a raw bar.

Stop in by Mar. 11 during the soft opening and food is 20 percent off. Also, the restaurant will donate 25 cents from every meal, even after the grand opening, to the Arlington Food Assistance Center. SER opens at 5 p.m. during their soft opening.

The Peruvian Brothers, Giuseppe and Mario Lanzone, have won the bid to showcase their culinary talents at the 49th annual Smithsonian Folklife Festival this summer. This year the Folklife Festival will highlight Peru with more than 100 Peruvian artisans, musicians and dancers, as well as artists and tradition bearers from the Peruvian American diaspora. 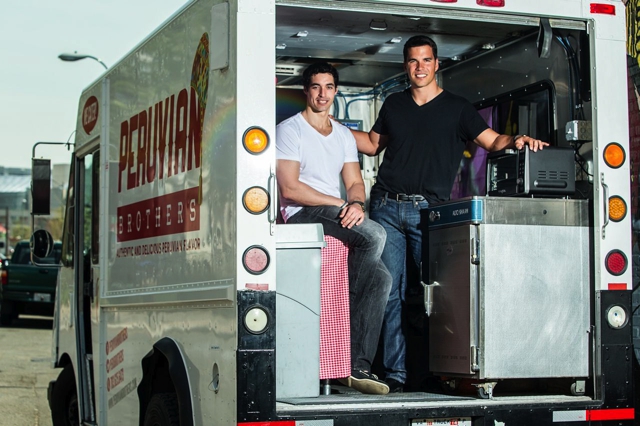 The brothers were born and raised in La Punta, Peru, where their father and uncle ran boat restaurants. Chef Mario Lanzone is a bartender at Napoleon Bistro and Lounge and spent recent summers captaining yachts in the Mediterranean. Giuseppe Lanzone competed with the U.S. rowing team in the 2008 Beijing Olympics and the 2012 London games, where his team finished fourth. He coaches men’s lightweight rowing at Georgetown University.

With an estimated attendance of 500,000-1.1 million over the 10 days, the program’s theme will be “connectivity.” Visitors will experience how ties are made and maintained in Peru through cooking and craft demonstrations, music and dance performances, moderated conservations, ritual and celebratory processions, and other activities. The Peruvian Brothers will craft their comida criolla dishes such as pan con chicharron, salted pork tenderloin sandwich, and fresh ceviche as well as vegetarian options all served with traditional salsa criolla, thinly sliced julienne onions marinated in lime juice with chopped Peruvian chilies.

The history behind the Peruvian comida criolla cuisine is as appealing and complex as the unique combinations of flavor. With roots in Andean-Spanish-Afro-Peruvian and Asian influences, comida criolla boasts powerful flavors. The Peruvian Brothers will serve recipes passed down in the Lanzone family as well as Mario’s own original spins on traditional Peruvian favorites.

“The Folklife Festival will be a wonderful opportunity for us to demonstrate our passion and knowledge of the foods we grew up with in Peru.” said Giuseppe Lanzone. “Each plate has a significant historical background that we would like to share with the Washington, D.C. community. In addition to our traditional sandwiches, we are going off menu to introduce some of our secret family recipes.”

The Folklife Festival takes place from 11-5:30 p.m. June 24-28 and July 1-5 on the National Mall in front of the national Museum of the American Indian. Admission to the festival is free 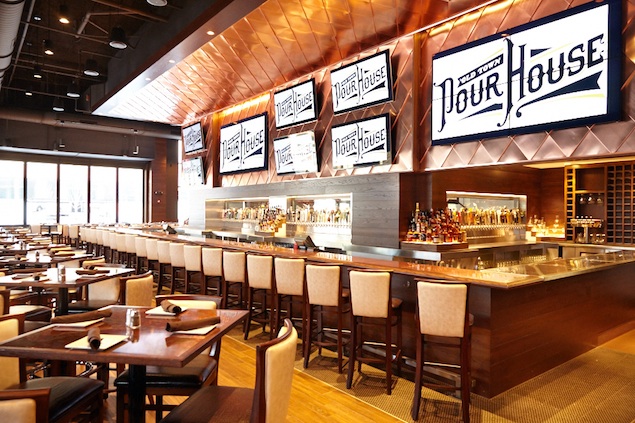 Also, from the kickoff of the 2015 NCAA Tournament to the final championship, fans can take make reservations to save their seats. 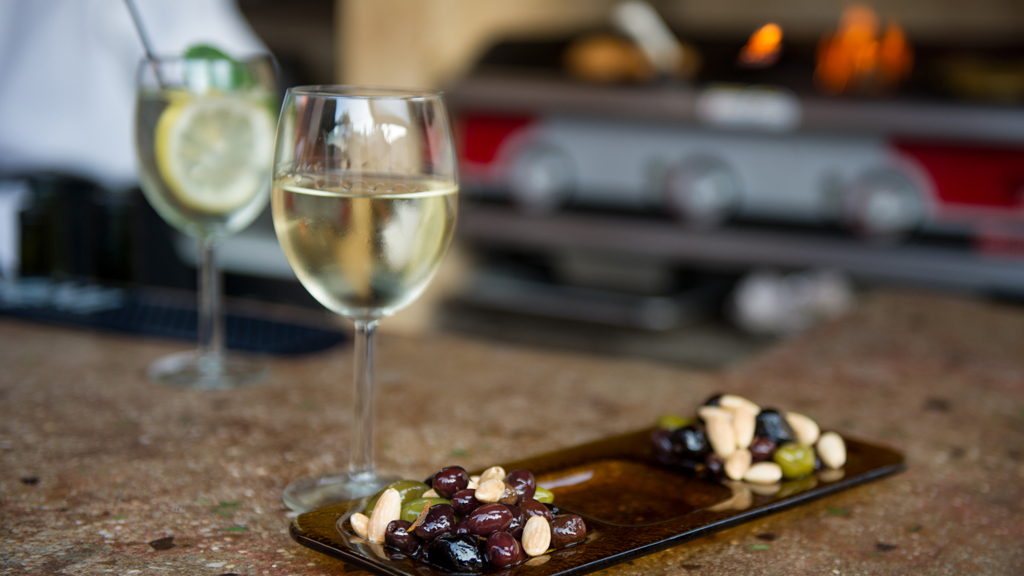 The spring wine classes will take place on Tuesday evenings from 7-8:30 p.m. in the restaurant’s upstairs lounge. Each class will explore and pour five to six different wines, and also include food pairings from executive chef Lonnie Zoeller as well as a $5 gift card.

All wine classes are $45 per person Space is limited to 20 people per class. To register, click here.

Happy hour is starting earlier at sister restaurants The Oval Room and 701 Restaurant. 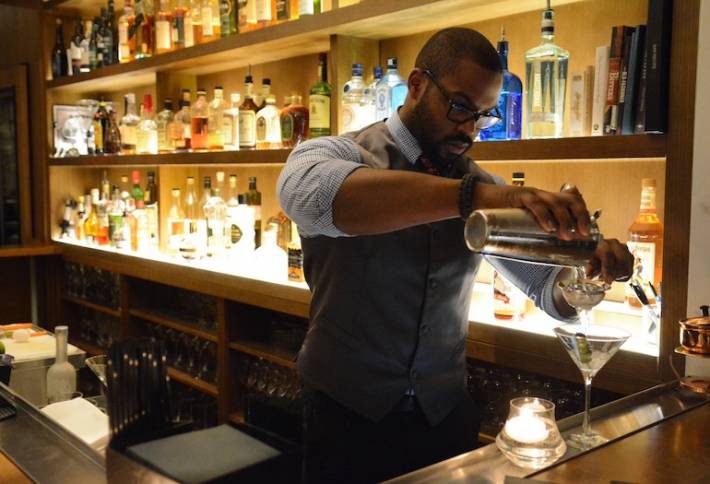 Get a jump on happy hour at The Oval Room or 701 Restaurant. (Photo: Bisnow)

Guests at 701 Restaurant, located at 701 Pennsylvania Ave. NW, can sip on featured cocktails, wines by the glass and bar snacks for $7 each 3-7 p.m. daily in the lounge. Current cocktails include the Cure Royale with Prosecco, Lillet Blanc and house vinegar; the Bitter Blonde with gin, sweet vermouth and Suze; the lavender lemon drop with Meyer lemon infused vodka and lavender simple syrup; and the Moscow Mule with Tito’s vodka, ginger syrup and ginger beer.

The Oval Room, 800 Connecticut Ave. NW, offers happy hour from 4:30-6:30 p.m. Monday through Friday. Select cocktails are $8 and select wines by the glass are $7 at the bar. Cocktails include the Oval Room Manhattan with Old Overholt rye shiskey, sweet vermouth, barrel aged bitters and a Campari amaretto cherry; The Lady Michelle with sparkling wine, vodka, lemon-lavender syrup and Crème Yvette; and the Jalisco Mule with ginger beer, Añejo tequila and sage.

Peter Kloiber, has been named the chef de cuisine at the remodeled Embassy Row Hotel’s new lobby restaurant, Station Kitchen & Cocktails and The Rooftop Lounge. He joins Robert Yealu, who was named director of restaurants in January overseeing all the restaurant’s food and beverage operations. 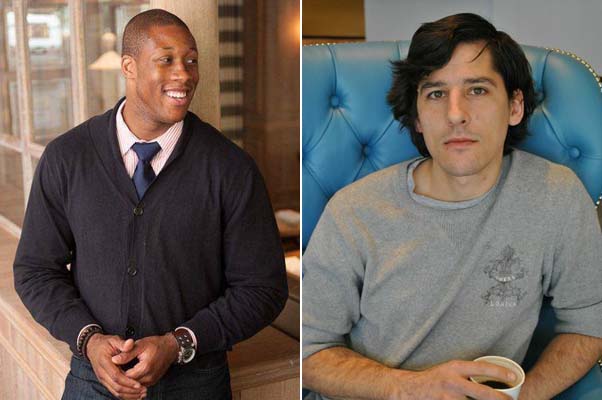 The hotel, 2015 Massachusetts Ave. NW, recently underwent a $15 million renovation. Station Kitchen & Cocktails will open Mar. 18 as part of what the hotel is calling a “lifestyle-driven lobby experience” anchored by the restaurant. During the day, the restaurant will serve Compass Coffee, baked goods from Union Kitchen

During the day, the restaurant will serve Compass Coffee, baked goods from Union Kitchen and a chef’s pantry with grab-and-go sandwiches. At night, the restaurant will serve small plates like Wellington meatballs, tuna casserole and Korean chicken lollipops at communal tables and nook-style seating. Station Kitchen & Cocktails will also serve a special of the day in a curated ceramic bowl made by students of the Corcoran School of Art at George Washington University. The restaurant will donate 25 cents from each bowl sold to So Others May Eat, which feeds the poor homeless.

The restaurant will also have a bottled cocktail program hand-crafted on-site with drinks such as the Lame Duck made with basil and clove roasted pineapple, lime, coconut IPA and rubber ducky; Vice & Virtue made with gin, burnt honey, imbue rose, thorn and sriracha flakes; and Sunny Side Up made with silver rum, kiwi syrup, key lime and “marshmallow” foam.

Originally from Wisconsin, Kloiber most recently worked at Marcel’s as sous chef. Previously, he spent two years as the sous chef at The Federalist restaurant at the Madison Hotel and at Jackie’s in Silver Spring. He started his culinary career locally as chef de tournant at Vidalia, under the direction of Jeff Buben and R.J. Cooper and also worked at Le Paradou.

Originally from New Jersey, Yealu relocated to Washington D.C. after graduating from the University of Buffalo to pursue a career on the Hill, but it wasn’t long before his passion took over and he landed a job as the beverage manager for Ping Pong Dim Sum. He most recently worked at Bordeau LLC, where he was director of operations overseeing Table and Menu MBK restaurants, as well as 42 Degree Catering. Prior to that, he built the beverage program as part of the opening team at The Federalist.