Nearly 700 children have lost their lives over the last 20 years in the United States as a result of being left in or playing in a hot car. At last count, the total in the U.S. this year is 18. 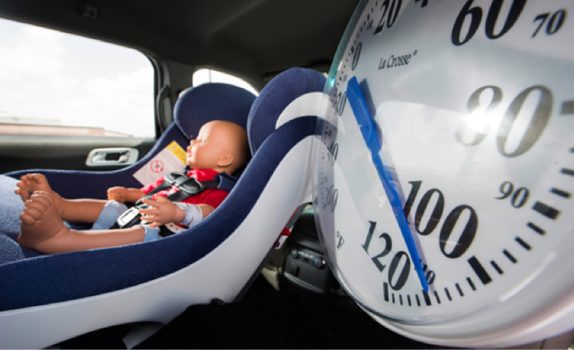 National Heat Stroke Prevention Day is a way to bring awareness to this largely preventable danger to children. According to Shannon DePatto, health educator for the Pediatric Trauma Injury Prevention Program at Penn State Hershey Children’s Hospital and Safe Kids Dauphin County, the cause of these deaths is usually attributable to heat stroke. Heat stroke occurs when the body rapidly increases in temperature.

“Internally, 104 degrees is the temperature at which the body will start shutting down its organs,” DePatto said. “Above 104 is when a child could possibly die from the heat stroke.”

A child’s body temperature can rise three to five times faster than an adult’s. Combine that with a 20-degree increase in temperature inside a vehicle that can happen in less than 10 minutes and you have the makings of a very dangerous situation.

“The internal temperature of the vehicle increases dramatically over a very short period of time even if the windows are rolled down,” she said.

There are some things parents and caregivers can do to prevent the tragedy of a child death inside a hot car.

Recognize that a car is not a toy.

Many car-related heat stroke deaths happen when a child wanders off and decides to play in the car. Teach your child the car is not a toy and is only used for transportation. Lock your car when not in use.

Do not sit your child in the front seat like it’s a game.

“Tell the child the car is not a toy and this is not an area that we play hide and seek. This isn’t a place we become curious and pretend like we can drive,” DePatto said.

Discourage kids from leaving toys around or in the car or playing near it.

Telling a child that the car is off limits could prevent them from ever going near the car.

Keep reminders in the car.

Some parents think they would never forget their child is in the car, but it does happen. Children fall asleep and parents are distracted. “If you are going to point ‘a’ to point ‘b’ you’re on autopilot,” she said. “A lot of parents are just focusing on their destination.” Put a note on your steering wheel that says ‘don’t forget Jimmy’ or leave your purse or briefcase or something you need in the back, as the National Highway Traffic Safety Administration suggests. “Another thing you could do is put a teddy bear on the passenger seat and that teddy bear will be that constant reminder that your child is in the back seat,” DePatto said.

Never leave your child in the car.

Some parents think they’ll only be a minute — that they’re going to run in and out quickly. But the fact is even five minutes could mean a substantial hike in temperature.

“It doesn’t even need to be a hot day. If the temperature is 60 degrees outside, the inside of the vehicle is going to be nearly twice that very quickly,” she said.

For more information on prevention, visit kidsandcars.org or http://www.safercar.gov/parents/heatstroke.htm.