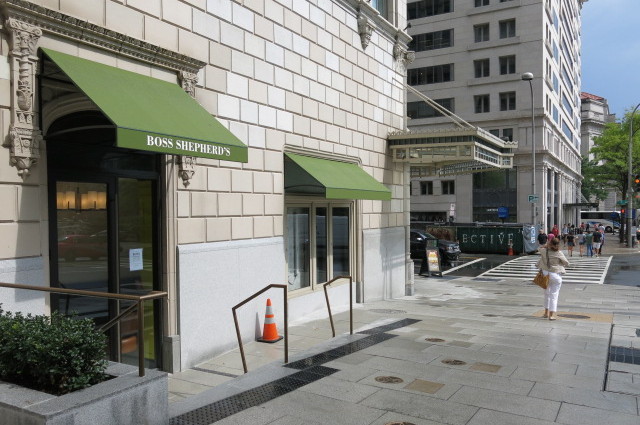 The restaurant is named for D.C. politico Alexander “Boss” Shepherd, often referred to as the “Father of Modern Washington.” Shepherd, governor of the District of Columbia from 1873-74, is credited with helping to improve and modernize the city’s infrastructure and convincing the federal government not to relocate to the Midwest.

Diners can expect authentic, fresh dishes from executive chef Jeremy Waybright on the menu, which highlights his years of classic southern cooking experience.

“Having cooked all over the south, I am thrilled for people to experience my fresh takes on familiar comfort dishes,” said Waybright in a press release. “By combining locally-sourced, seasonal ingredients with bold and exciting flavors, the menu screams American-made.”

The menu boasts fresh takes on time-honored, rustic classics with such as Maine blue mussels with sausage, cider beer, vermouth and pickled chili, or bone marrow served with herbs, pickled egg, breakfast radish and toast. On the sandwich menu is the Hamburg, a classic burger made with Virginia grass-fed beef, sweet onion and cheddar cheese on a brioche bun. There’s also a pastrami salmon sandwich served with pickled onion, baby lettuce and dill cream on a poppy seed bun. The fried chicken entrée is served with butter-poached radish, smoked egg yolk, hot sauce and a biscuit, while the Carolina trout with Meyer lemon includes capers, brown butter and Wade’s Mill white grits. Boss Shepherd’s will also offer classics such as steak dishes and crab cakes. See the full menu here.

The restaurant’s back bar will feature two 5-gallon barrels of A. Smith Bowman reserve whiskey as well as Catoctin Creek roundhouse rye (92 proof). The beer selection emphasizes local breweries’ concoctions such as Port City’s oyster stout and DC Brau’s golden ale, as well as specialties from Flying Dog Brewery and Atlas Brew Works. Alongside the whiskey and beer programs, Boss Shepherd’s offers a wine list of 35 American and international wines by the glass.

Boss Shepherd’s opens at 11 a.m. Monday through Friday and at 4 p.m. on Saturday. It is closed Sunday.

On July 21 at 7:30 p.m., Bibiana Osteria Enoteca, 1100 New York Ave. NW, will hold a guided tasting and winemaker’s dinner showcasing wines from Prá winery, one of Italy’s producers of the rare Soave and Amarone varietals located on the slopes of the Valle di Mezzane in the Verona province.

Owner Graziano Prà has been managing the winery since the early 1980s, following in the footsteps of his father and grandfather, and has brought international fame to small wine producing areas such as Colle Sant’Antonio, Il Monte Grande and La Morandina.

Executive chef Nicholas Stefanelli will be preparing a three-course dinner with wine pairings showcasing traditional Veronese varietals. There will be a tasting of Venetian Canapés to accompany the guided tour. The first course is Vialona nero risotto with cuttlefish and squid ink paired with Soave ‘Otto’ 2013. The second course includes roasted dry-aged Muscovy duck breast with pancetta and fresh herbs paird with Valpolicella Ripasso ‘Morandina’ 2011. The final course is a duo of piave cheese, summer fruits and pine nuts paired with Amarone della Valpolicella 2008.

The restaurant serves halal food with most entrees priced from $13-$17 for lunch and dinner daily. India Gate is open from 10:30 a.m.-11:30 p.m. weekdays and 10:30 a.m.-midnight weekends. Both delivery and carryout are offered.

Vertitas Wine Bar in Dupont to close in August

Vertitas Wine Bar, one of the first wine bars to open in the city at 2031 Florida Ave. NW, is closing Aug. 2. The restaurant posted the new on its Facebook account Thursday.

The blog Barred in DC tweeted that something called McClellan’s Retreat will replace it, but there is no other details yet.

.@veritaswinebar in north Dupont will be closing August 2nd. Opened in Oct 2007. Possibly replaced by something called McClellan's Retreat.

Jack Rose Dining Saloon recently reopened its rooftop Tiki bar for the season. It is open Thursday through Saturday at 5 p.m. with tropical cocktails and island-inspired food and a “Tiki Thursdays” happy hour from 5-10 p.m.

Jack Rose’s bartenders are serving up cocktails such as the Singapore Sling, Hurricane, Rye Tai, Break Fluid and Orange Crush for $12 each. And executive chef Russell Jones is grilling up items on the terrace’s wood-fired grill such as grilled shrimp tacos with jicama slaw ($8), Polynesian pork belly skewers with charred pineapple ($8), clam dip with fresh horseradish, chives, fresh lemon and homemade potato ruffles ($9), roasted corn on the cob with smoked paprika and parmigiano reggiano cheese ($6) and jalapeno hushpuppies with Old Bay mayo ($6). During Tiki Thursday happy hour, cocktails and food are half-price and draft beers are $2 off.

Following six years of organic farming in Minnesota, teaching culinary school and opening up a craft beer bar in Minneapolis, Nathan Beauchamp is returning to D.C. to helm the kitchen as executive chef at The Fainting Goat, 1330 U St. NW. 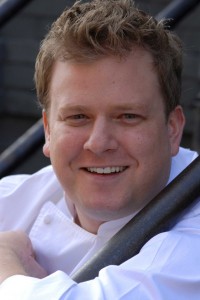 A former RAMMY Award-winner, Beauchamp formerly was executive chef at 1789 in Georgetown. A graduate of the Culinary Institute of America in Hyde Park, N.Y., Beauchamp has also worked in kitchens such as Park Avenue Café in NYC with David Burke, and at Restaurant Eve, Vidalia and Bistro Bis in the DMV.

Beauchamp left D.C. in 2008 for Minneapolis, where he taught culinary school at the Art Institute, focusing on charcuterie, and dabbled in organic farming at Gemini Farm in Wadena, Minn., growing rhubarb, potatoes, green beans and other seasonal produce. He also co-opened Devil’s Advocate, a craft beer bar and restaurant in downtown Minneapolis.

“Coming back to D.C. after a few years away is very exciting!” Beauchamp said in a press release. “I equate it to the prodigal son coming home again. I missed being on the East Coast and I’m happy to return to see family and friends.”

The Eastern Shore native says the menu will remain very similar in format with dishes broken down into “Nibble,” “Graze,” “Chomp” and “Feed”, and contemporary, modern American cuisine. He will put his own culinary stamp on each dish, incorporating some international flavors and highlighting fresh seasonal vegetables and produce.

“After only working in fine dining while in D.C., I wanted to change pace and work in a casual space while still creating innovative food,” said Beauchamp. “So when my good friend Greg (Algie, owner of The Fainting Goat) presented me with the opportunity, I knew this was a perfect fit. The restaurant is beautiful, and I am very excited about getting back into the kitchen and especially, pairing the food with their stellar beverage program.”

Dishes that will roll out in mid-July may include smaller bites like uni toast with shaved zucchini, radish, opal basil, and charred carrots with farro, date molasses, goat cheese; and larger entrees like Arctic char with cucumber miso, fava beans and pickled chanterelles, and duck meatballs with huckleberries and lime cracklins. He’s also playing around with dishes like a braised goat arancini with tomato confit, a Jamaican curry goat sandwich and goat carpaccio. 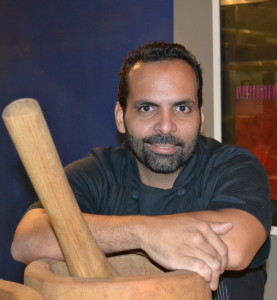 Hernandez has been a featured guest chef at Mio and is an expert in Latin ingredients and flavors, gleaned from his Cuban grandmother and his Puerto Rican upbringing. He has cooked in some leading kitchens and at events in the U.S. including the Blue Door Restaurant at the five-star Delano Hotel in Miami and the South Beach Food and Wine Festival. Hernandez was also tapped as the chef de cuisine at Donald Trump’s Palm Beach Mar-a-Largo Club.

In 2009, Hernandez began his culinary consulting work providing services to top establishments like The Grove Isle Hotel in Miami and Andrew’s Restaurant in Boca Raton. He was also commissioned by restaurateur Johan Stenberg to travel to Sweden and share his culinary expertise at two of Stenberg’s newest operations near Stockholm, Le Hammagazinet and the Tellus Club. Then in 2012, he returned to Puerto Rico as the culinary director for Cultura Culinaria LLC, a nonprofit foundation that positions the Puerto Rican gastronomy in the Caribbean, Central and South America. In this role, Hernandez contributed with the production team designing and developing the logistics for culinary events in Puerto Rico and the U.S. Virgin Islands. His work included an invitation to the International Culinary Center in New York City, to present a kitchen demonstration on Puerto Rican cuisine and its evolution. 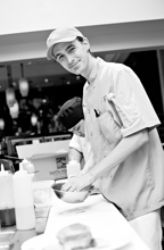 “Many of my teenage years were spent combing M Street, and I’m excited to get to know Georgetown on a different level,” said Ross, who grew up in nearby Virginia.

Ross has already started getting his hands dirty with his new C&O Canal-front patio chef’s garden, where he grows herbs and vegetables for Pinstripe’s kitchen. Tarragon, basil, pomegranate, spinach, onion, figs, arugula, eggplant, parsley and heirloom tomatoes were planted in mid-June in anticipation of the late summer and fall dishes.

“Not only is the garden a beautiful addition to Wisconsin Avenue, but it will provide Pinstripes with seasonal, peak-flavor produce that will futher enhance our from-scratch menu offerings,” Ross said. “My sous chef and I love tending the garden in the early morning and throughout the day.” 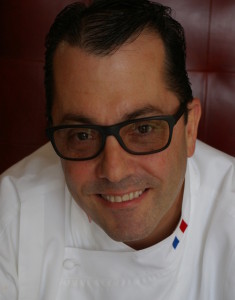 Devesa will oversee Cafe du Parc, the hotel’s French restaurant, as well as catering and banquets.

A native of Marseilles, Devesa has worked for such restaurants and hotels as the InterContintental New York Barclay, the Colette Bar and Bistro and others. He is a certified Master Chef by the Maîtres Cuisiniers de France.