Chef Spike Mendelsohn of Good Stuff Eatery and Bernaise and Vinoda Basnayake of Kabin opened their new speakeasy July 8 on the second floor of 1337 Connecticut Ave. NW in the Dupont Circle neighborhood. 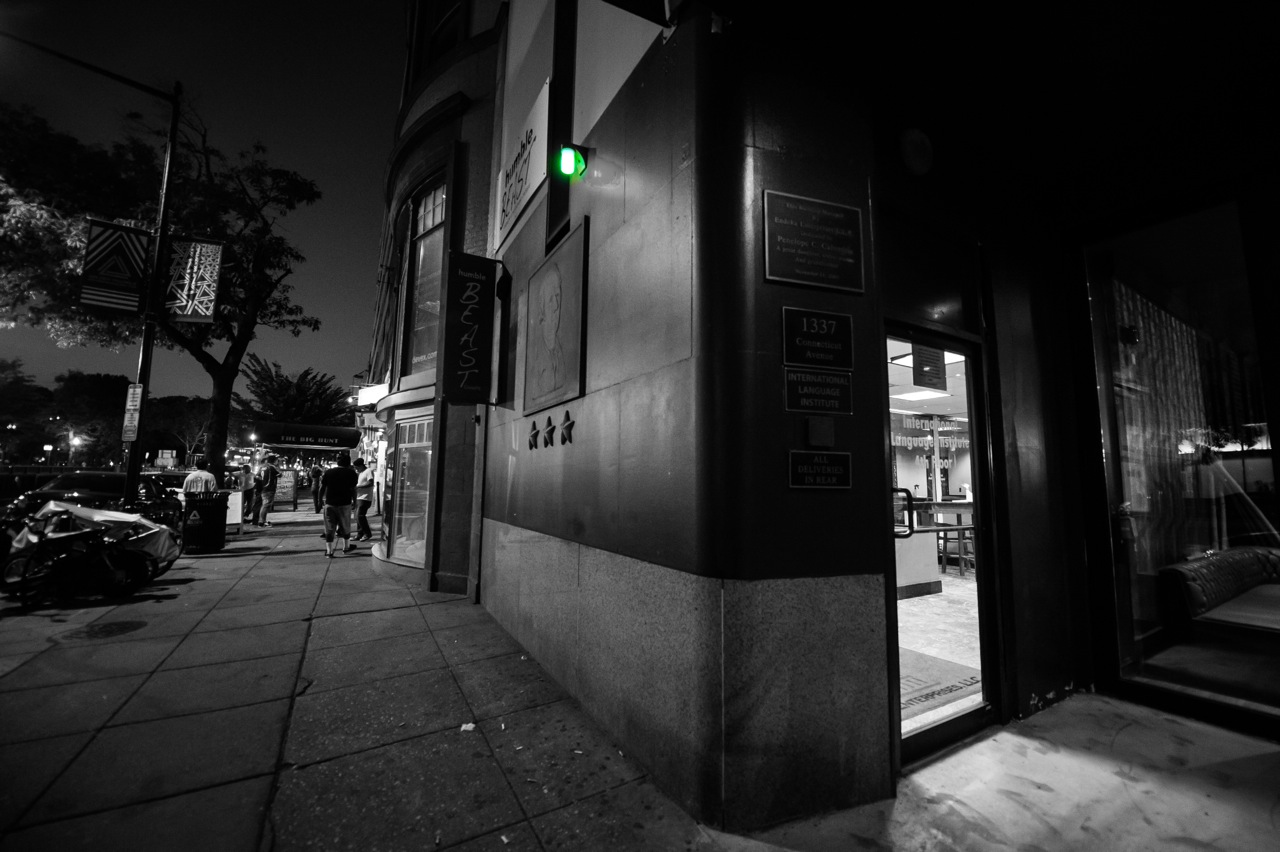 The Sheppard, a new speakeasy by Spike Mendelsohn and Vinoda Basnayake, is marked only by an illuminated green light when it is open.
(Photo: The Sheppard)

The Sheppard is named for Sen. Morris Sheppard, a Texas teetotaler known as the father of Prohibition who authored The Sheppard Bone-Dry Act of 1917 banning alcohol in the District. Like many speakeasies of the era, The Sheppard’s only marking feature is a green light on the exterior of the building that will be illuminated when open. Upon entering the lobby, guests will be escorted to an elevator that opens directly into the 35-seat space.

The décor embraces a cocktail lounge setting with a bar that seats 12, a few booth draped in red velvet curtains, dim lighting, banquettes, chandeliers and photos from D.C.’s prohibition era including one of Sheppard.

The drink list was designed by mixologist Jack Caminos. He came up about 14 rotating cocktails including modernist concoctions and punches that are priced from $12 to $18. Some of the opening drinks include The Cigar, made with mezcal, rye whiskey and ; the Huître, a foam cocktail designed to ; and the BCBG, described as an “unaged Armagnac cocktail that resembles a mildly fruity version of a Manhattan served in a sphere of ice.” Mini bottle service is offered after 11 p.m.

Mendelsohn has created a sparse bar snacks menu featuring items such as Sriracha deviled eggs with caviar confetti, ibérico ham and a cheese plate. Key lime pie in a jar is offered for dessert.

The Sheppard is open from 5 p.m.-2 a.m. Tuesday through Thursday and 5 p.m.-3 a.m. Friday and Saturday 5 p.m.-3 a.m. It does not accept reservations and has a no photo policy, so no selfies allowed. 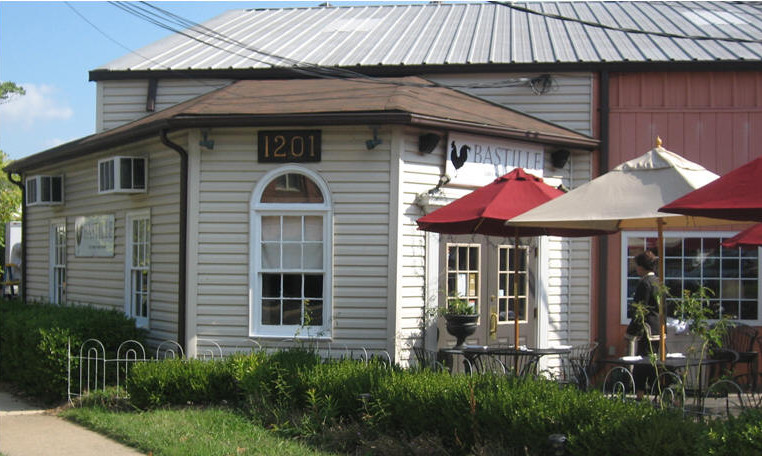 The full menu is available here.

The Quill restaurant at The Jefferson, DC, 1200 16th St. NW, is serving up old-fashioned prix fixe Sunday suppers with favorites from your mother’s chicken to freshly baked apple pie. 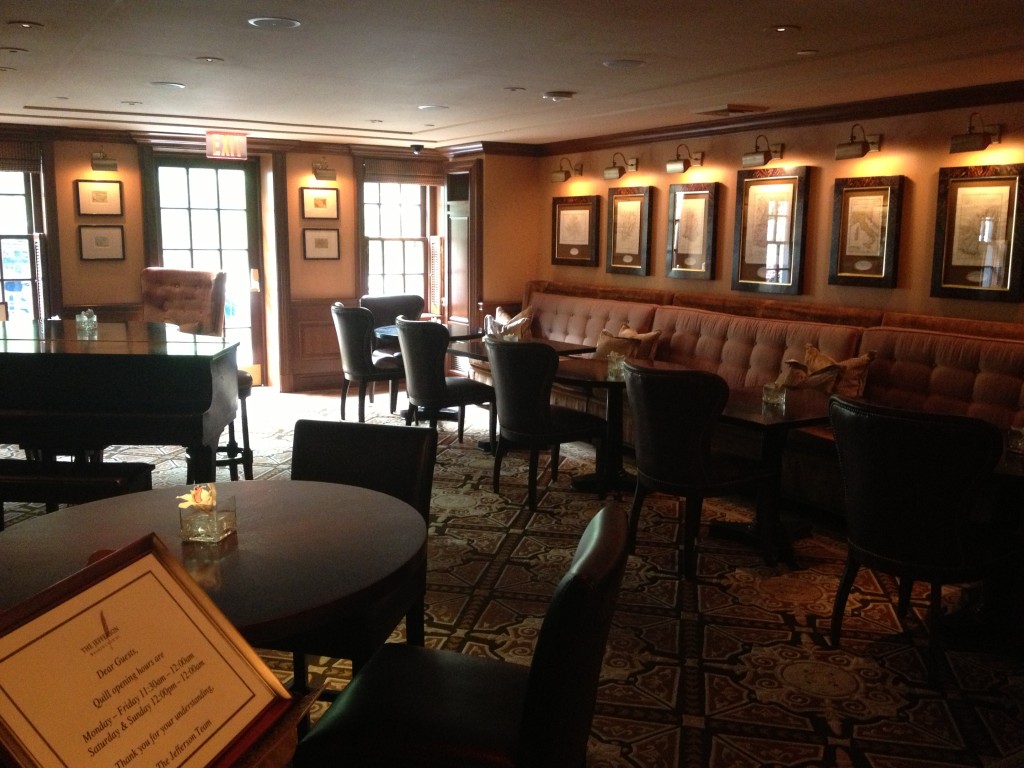 Sunday suppers mean family meals around a large table, sharing comfort food. From 5-10 p.m. each Sunday, the Quill will serve its three-course dinners with one glass of for $35. The menu has included an heirloom tomato salad with grilled ciabatta, cucumber, red onion and a white wine vinegar dressing, quiche lorraine and a crispy soft shell crab with spicy avocado mousse, cucumber and cherry salad. Enjoy a crispy funnel cake with strawberries and whipped cream or maybe key lime pie for dessert.

The menu will change weekly and be based on seasonal availability. Call 202-448-2300 to find out what is on this week’s menu. 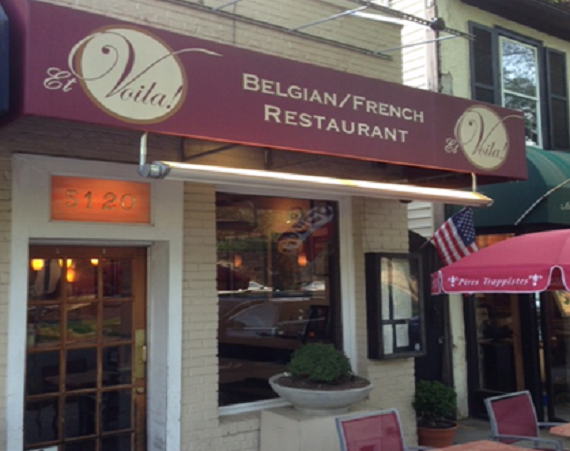 From July 14-21, executive chef and owner Claudio Pirollo will be serving a three-course, prix fixe menu paired with Belgian beers for $39.95. 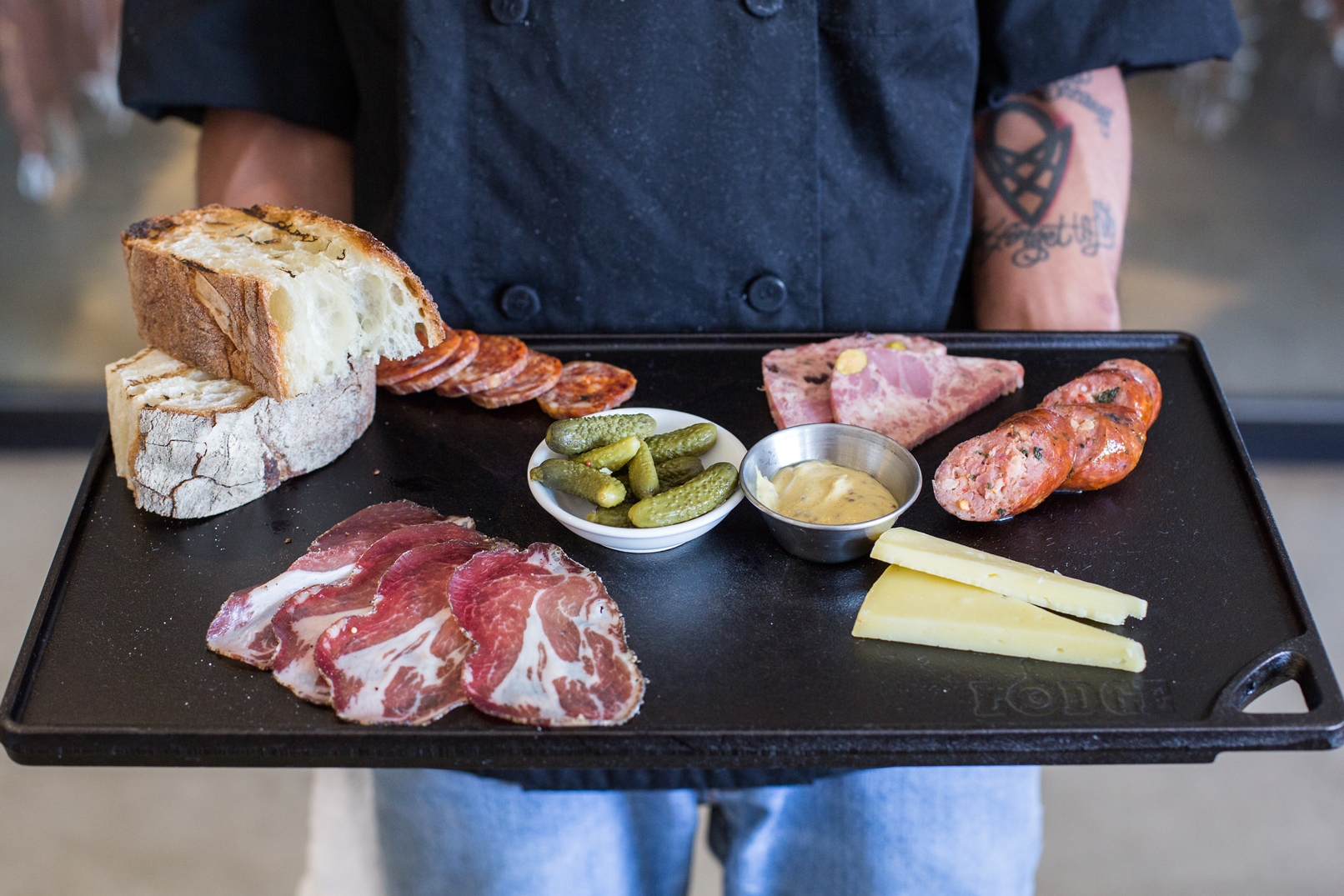 “Summer brings warm weather and a spirit of celebration,” said chef and owner Raynold Mendizabal. “With our daily and extended weekend happy hour, we hope to provide the community with a place to enjoy good company and good times — on a regular basis.”

Happy hour specialty cocktails priced at $5 each include white sangria, the Dirty Gibson, a lavender margarita and Boulevardier. Also, there will be $5 select wines by the glass and $5 rotating draft beer. The menu includes items such as beef empanadas and chimichurri ($4), butcher’s meatballs and melted provolone ($7), smoked bluefish rillette ($5), charred country bread with house pancetta ($9) and the happy hour meat cellar board with one cured mean, one sausage, one salami, one cheese and one paté chosen by the chef ($15).

There will also be $10 sandwiches served with fries that include prosciutto cotto and provolone, thick-cut house pastrami, hickory bourbon pulled pork BBQ and smoked mozzarella and the Butcher’s Burger made will all prime local brisket ground daily. 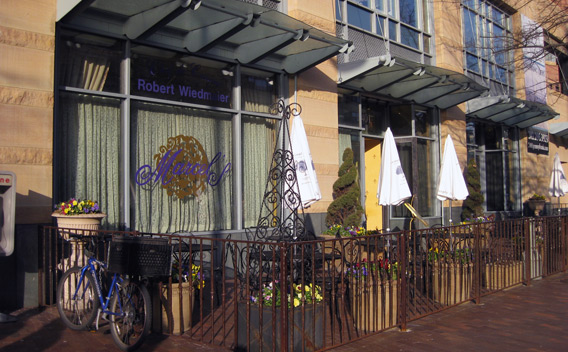 Marcel’s will serve a pre-theater menu for kids. (Photo: Cuisinivity)

Children 12 and under can be king for a night while enjoying the $36 pre-theater menu. You won’t find Pumbaa and Timon’s bug buffet, but children can enjoy an array of cub-friendly dishes with entrée selections such as house-made grilled cheese sliders with tomato dipping sauce, crispy chicken tenders with honey mustard sauce or a petite filet mignon with French fries. For dessert, the little theatergoing guests can enjoy vanilla ice cream with chocolate “mud” sauce before raising a glass to “Hakuna Matata” with a “cubtail” tropical fruit punch.

After feasting like Simba, complimentary on-site ground transportation will get you and the whole pride past the stampede and to The Kennedy Center before curtain call. 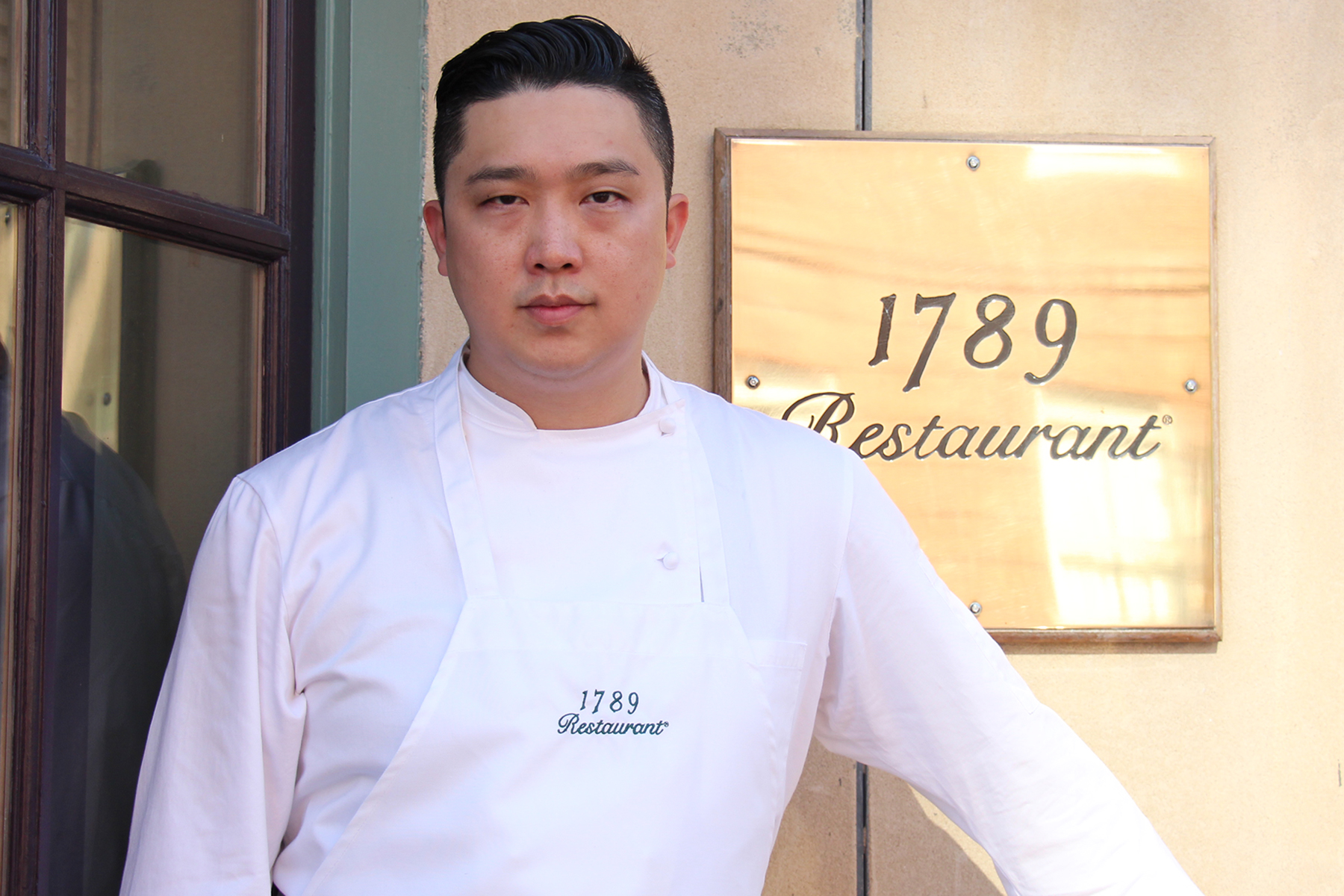 Kim most recently served as the executive sous chef at Colicchio and Sons, a position he held since October 2011. Colicchio and Sons earned the 2013 Trip Advisor award for Top Restaurant in the USA and Number Two in the World during his tenure. His appointment at 1789 Restaurant brings him full circle as he began his culinary career in 2004, when he convinced Ris Lacoste to hire him at 1789.

“We are thrilled to have Samuel back with us at 1789,” said Tom Meyer, president of Clyde’s Restaurant Group, in a press release. “He has a well-grounded approach to modern contemporary cooking which fits perfectly at 1789.”

Kim’s first career was in finance. He earned a BS in finance the University of Maryland, then moved to New York to work on the commodities desk with an investment bank. However, the culinary field was his true passion, and he found his place in the kitchen at 1789 Restaurant as chef de partie rotisseur. He was later promoted to work on the opening culinary team as a sous chef at Clyde’s Gallery Place in 2005. In August 2007, he returned to New York City to accept a position at The Modern, where he worked for three years before joining Tom Colicchio’s Craft Restaurant Group at the Chelsea restaurant, Colicchio and Sons. While working in New York City, Kim also spent time working in other prestigious kitchens including Per Se and Jean George.