Dolcezza gelato’s sixth location opened this morning at 8 a.m. at 1418 14th St. NW in a 1878 building that formerly housed a deli and was originally a pharmacy. 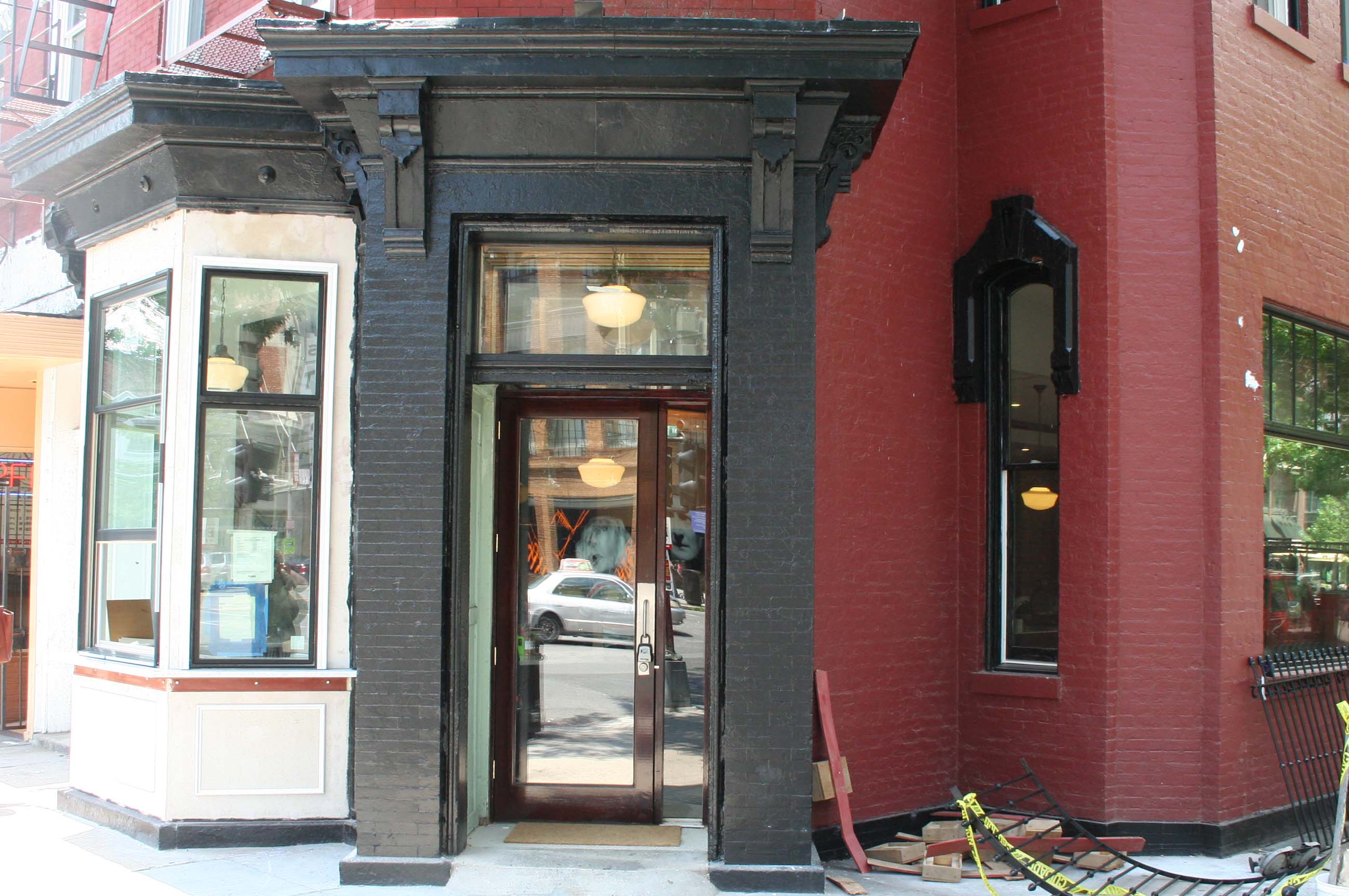 The 1,000 square-foot store, at the corner of 14th and P streets NW, is the first Dolcezza to feature a “to-go” window that will allow customers to order gelato, pastries and Stumptown Coffee from the street. It is also the first location to have a sundae bar where customers can enjoy a rotating seasonal sundae or “coppetta” – which means little dish in Italian – menu with homemade whipped cream and fresh seasonal toppings to their favorite gelatos and sorbettos. Coppettas are priced between $7 and $10.

Designed by Groupo 7, Dolcezza kept the original front entrance door and retail shelving. The store has an apothecary feel with light fixtures from Housewerks Salvage in Baltimore and seats 30. The patio will seat another 10 people.

Dolcezza is also celebrating National Ice Cream Month and its 10th anniversary in July. On Tuesday, July 1, the first 100 customers at each of the six locations will receive a free chocolate suizo (Swiss) gelato mixed with chocolate pieces and dulce de leche gelato mini cone. This was the first flavor co-owner Robb Duncan tasted while traveling with his wife Violeta Edelman in Argentina and was the inspiration for Dolcezza.

Also, anyone whose birthday is in July can take a valid ID to any location and receive a free small gelato of their choice. Dolcezza’s other locations include Union Market, Fairfax’s Mosaic District, 1560 Wisconsin Avenue NW in Georgetown, 1704 Connecticut Ave. NW in Georgetown and 7111 Bethesda Lane in Bethesda. 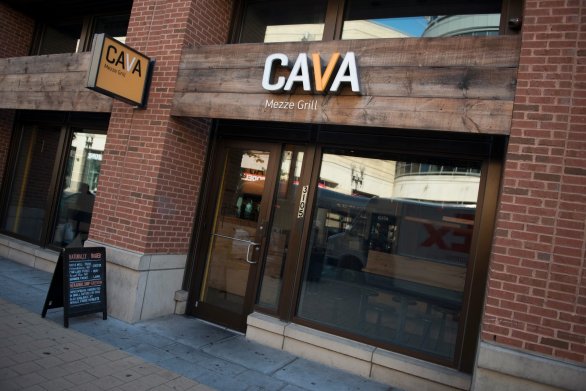 Chef Dimitri Moshovitis has also created a cold roasted Gazpacho with roasted tomatoes from Hummingbird Farm in Ridgely, Md., roasted jalapeño and garlic and basil-infused olive oil ($3.25) with a sprinkle of feta or fresh cucumber topping.

Other menu additions rolling out this summer include a salted dark chocolate chip oat cookie ($2.75); a pickled banana pepper, which will become one of the restaurant’s on-going toppings; and seasonal bottled sweet teas from D.C.-based RunningByrd Tea handmade at Union Kitchen. The four summer flavors will be Summer Rain, an Indian masala chai with a peppery finish; Montgomery Mint, a lightly minty tea; Shenandoah Smoke, a smoked hazelnut tea a spiced finish and almost coffee-like flavor; and unsweetened white peach blended with lemongrass and a touch of lavender. 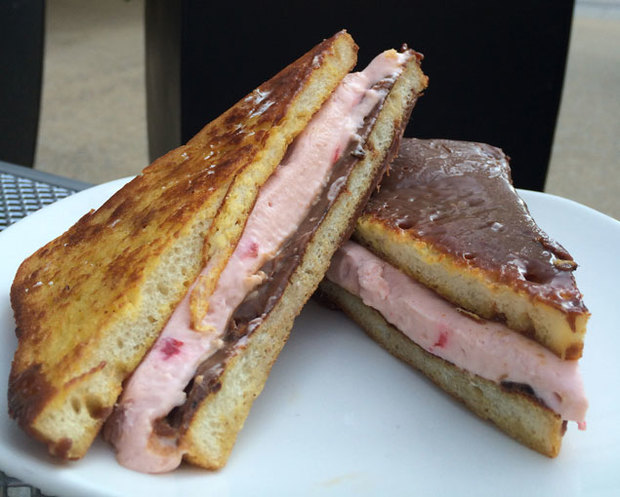 The new cream ice cream sandwiches feature scoops of homemade fruit and chocolate-infused cream cheese ice cream sandwiched between brioche French toast, and half-dipped in house-made sauces like chocolate ganache and bourbon caramel. Made with cream cheese, heavy cream, vanilla, sugar and spices, the ice creams are infused with fresh, artisan ingredients like strawberries, red delicious apples, coffee beans and Grand Marnier for a boozy touch, and then served on French toast made from Lyon Bakery’s brioche pullman loaf. The ice cream sandwiches will be available evenings from 4-9 p.m. and are $7 each.

To celebrate the official opening of its patio on July 2, the first 40 customers starting at 4 p.m. will receive a free ice cream sandwich.

Chef David Guas, who owns Bayou Bakery, Coffee Bar & Eatery at 1515 N. Courthouse Road, Arlington and will open a second location at 901 Pennsylvania Ave. NE this fall, will host Travel Channel’s American Grilled, a grilling competition on Wednesdays at 9 p.m. from July 2 through Sept. 24. Guas will also be a judge on the show. 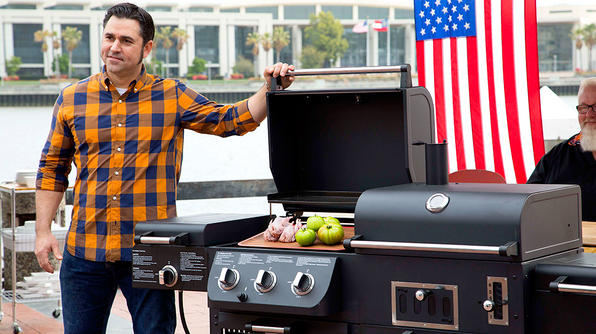 The first episode was filmed in Ashville, N.C., followed by Annapolis on July 9 and Charlottesville on July 16. During the 13 episode summer series, grill aficionados with experience ranging from backyard grillers to small town cooks, battle one another in the ultimate outdoor cooking challenge for a $10,000 prize. In each episode, four contestants use locally sourced ingredients – blue crab in Maryland, quail in Georgia and T-bone steaks in Texas to name a few – to test their backyard skills. They’ll serve up delicious and original plates that skillfully showcase the grill and embrace the amazing local flavors.

Guas, originally from New Orleans, will appear on the Today show July 2 at 9 a.m. to talk about the new show with hosts Al Roker, Natalie Morales, Tamron Hall and Willie Geist.

“I’ve always had the urge to explore Argentine cuisine, particularly the parrilla aspect that’s so ingrained in the culture. We want the fire to be a presence, the way it was during so many of our experiences during our trip to Argentina. We’re going to cook as much as we can over that flame,” Garces said in a release.

Dinner offerings will include Argentinian charcuterie, grass-fed Urguayan rib-eye, jumbo
cardinal prawns and a variety of grilled vegetables. There will also be Argentinian pizzas and some pasta dishes.

Avroko is handling the restaurant’s design, which is inspired by the South American cowboy. Imagery of horses, leather banquettes and wooden tables are among the accents. There are private dining rooms inspired by tack rooms. An outdoor terrace will open eventually.

As of this past Thursday, Belga Café and B Too, both owned by chef Bart Vandaele, are the first restaurants in the U.S. to carry Chimay Red beer on draft. The draft will be exclusive to the two restaurants for two weeks. 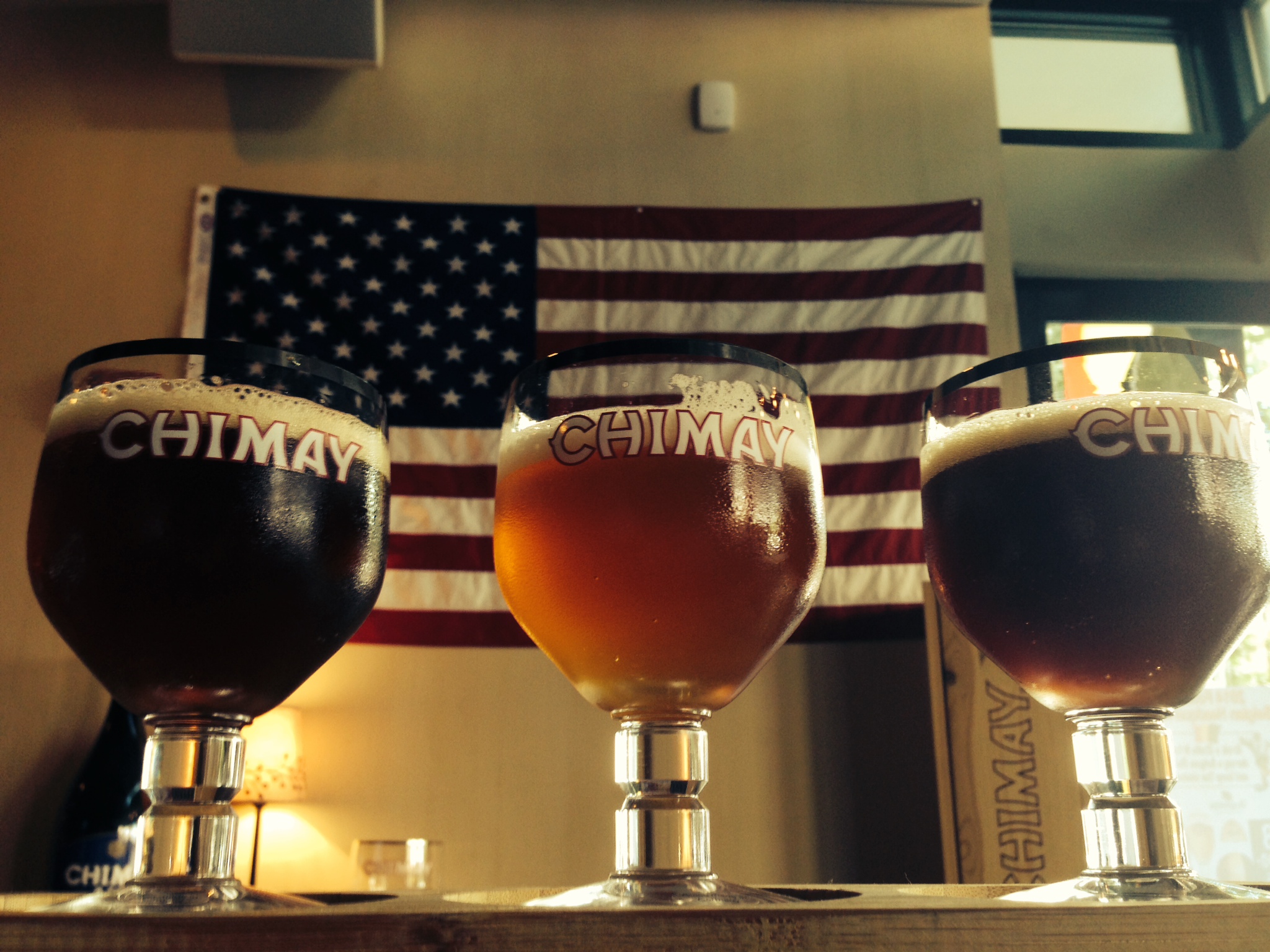 The red, white and blue Chimay beer flight being offered at Belga Cafe and B Too. (Photo: Belga Cafe/B Too)

This is the first time ever that kegs of Chimay Red are available in the U.S., and Vandaele purchased 50 of the 700 limited keg release for B Too, 1324 14th St. NW, and Belga Café, 514 8th St. SE. The monks at Scourmont Abbey have been brewing Chimay Red since 1862. The copper-colored ale boasts flavors of apricots, brown sugar and nutmeg with aromatics made all the more dramatic by the draft.

The two Belgian restaurants are also offering an exclusive red, white and blue Chimay beer flight (15 ounces total) for $19.50. Glasses of Chimay Red are $12, Chimay White are $13 and Chimay Blue are $14.

Both always carry bottled versions of all three and have the white on tap. The flight will include drafts of the Red and White, while the blue will be poured from the bottle.

Fisher will stand at the front window to offer free tastes of his favorite, rare wines from 5-7 p.m. He plans to showcase interesting wines inspired by his travels while sharing his extensive wine knowledge and answering questions for eager to learn patrons and passers-by.

In addition, special flights will be available featuring three wines highlighting one particular region for $20.

“We are incredibly … thrilled to put Cleveland Park on the map once more as a destination for upscale casual dining and great wine,” said Fisher. “Our guests are the reason we are celebrating these wins as well as our fourth anniversary this month.”

Fisher’s ability to source rare wines at an incredible value has helped Ripple build a reputation as a destination for area wine connoisseurs. Executive chef Marjorie Meek-Bradley fuses classical cooking techniques with millennial tendencies, while Fisher’s list of wines offers standbys alongside rarer labels, all of which focus on sustainable, biodynamic and organic practices.

Ripple stocks more than 3,000 bottles in their wine cellar and offers 50 wines by the glass. Its wine program highlights small family producers, with a commitment to sustainable, organic or biodynamic production.

Other local restaurants to make the magazine’s list also includes Doi Moi, Estadio, Fiola, Minibar and The Red Hen in the District. No Virginia restaurants made the cut and Woodberry Kitchen in Baltimore was the only Maryland restaurant. 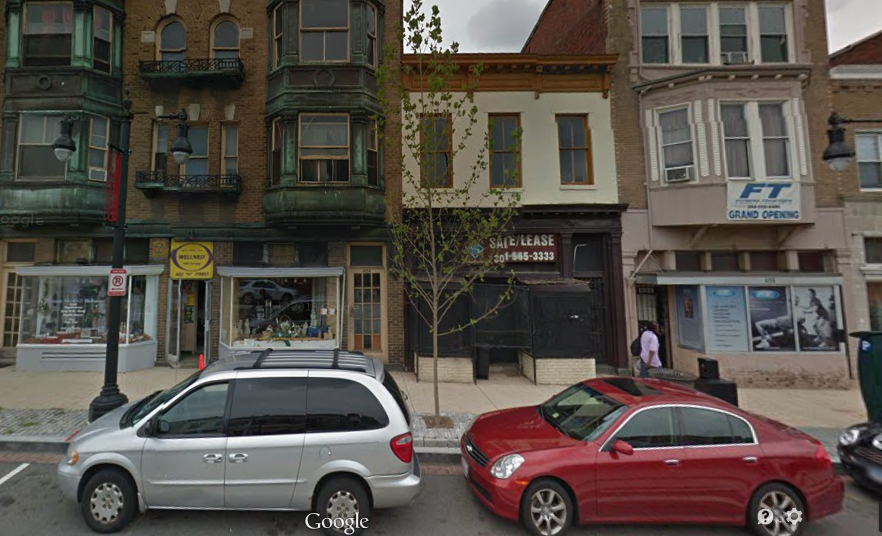 The second location for the vegan bakery will be at 406 H St. NE in a 2,600 square-foot space featuring an expanded bakery program, bistro dining menu and a full bar.

“The second location of Sticky Fingers has been in the making for a long time now, and H Street is the perfect spot for us to expand into,” said owner Doron Petersan, a two time winner of Food Network’s Cupcake Wars. “The neighborhood is really coming into its own, and with the addition of the street cars it’s only going to get better. The area has the same kind of young, active and compassionate residents that our Colombia Heights location has been serving for years.”

Sticky Fingers originally opened in north Dupont Circle in 2002 with the mission of bringing baked goods made without the use of animal products to the District – a mission that eventually expanded to include a full menu of savory plant-based comfort food with a move to Columbia Heights.

The new location will offer an expanded menu and more dining space than the original location. The bakery and bistro will have the look and feel of a classic mid-century American diner, featuring a lunch counter as well as “grab-and-go” service and table service for approximately 50 diners. It will be open seven days a week for breakfast, lunch and dinner, and have bar hours on Fridays and Saturdays.

The expanded bakery program will include Sticky Fingers classics, like sticky buns, cookies, cakes and cupcakes, and new items like Italian-style breads, scones, Danishes, croissants and pies. The bistro menu will focus on vegan and gluten-free comfort food and the bar will serve beer, wine and cocktails.