For aspiring comedian Donna Stern, everyday life as a female twenty-something provides ample material for her hysterical and relatable brand of humor. On stage, Donna is unapologetically herself, joking about topics as intimate as her sex life and as crude as her day-old underwear. But when Donna gets dumped, loses her job and finds herself pregnant just in time for Valentine’s Day, she has to navigate the murky waters of independent adulthood for the first time. As she grapples with an uncertain financial future, an unwanted pregnancy and a surprising new suitor, Donna begins to discover that the most terrifying thing about adulthood isn’t facing it all on her own. It’s allowing herself to accept the support and love of others. 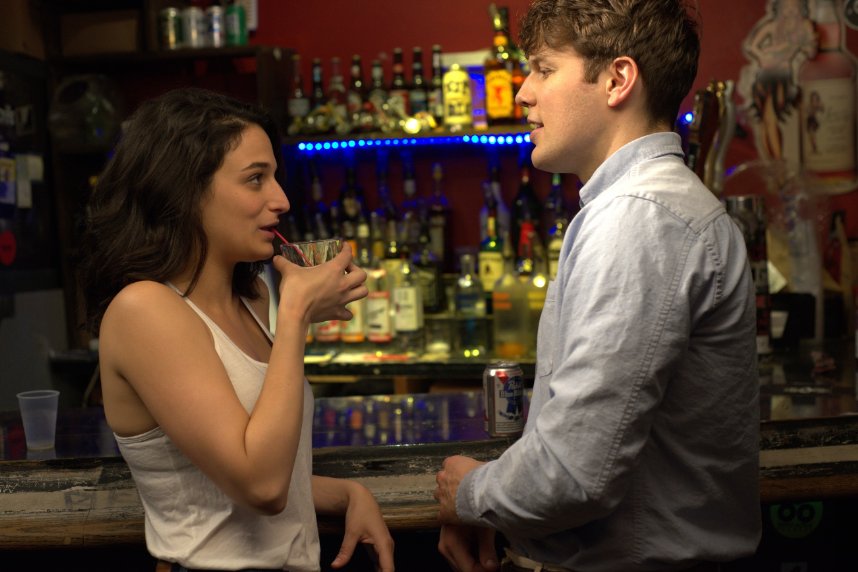 Donna (Jenny Slate), a foulmouthed, self-absorbed but ultimately charming comic, considers an abortion after hooking up with Max (Jake Lacy) in Obvious Child. (Photo: A24)

Obvious Child is a quirky romantic comedy. On the surface, it is about a few weeks in the life of aspiring stand-up comic Donna Stern (the very funny Jenny Slate from Saturday Night Live and Parks and Recreation). The movie follows Donna’s emotional journey from romance, to breakup, to one-night stand, to unexpected pregnancy, to romance, to abortion — much of which is fodder for laughs in her confessional-style late-night routines.

Written and directed by Gillian Robespierre, Obvious Child uses Donna’s revelations about her personal life — from sex to hygiene — to work through a range of personal issues. Abortion may be the big one, but not the only one. Her relationship status — with guys, friends, parents and career — are all touched upon.

As the film opens, Donna, a not-very-funny Jewish 28 year-old struggling to make a career for herself as a stand-up comic, is telling the crowd about her deteriorating romantic relationship as her boyfriend grimaces near the back of the room. But soon he is in the crowded unisex restroom breaking up with her. He’s leaving her for her best friend.

The next few weeks are lost in a depressing, alcohol-fueled stupor, occasionally interrupted by stints at the beloved bookstore where she works (but whose owner has just announced that it is closing) and visits with her parents – her demanding mom Nancy (Polly Draper) is a business school professor. Her nurturing dad (Richard Kind) is a puppeteer. They are worried about her future, but Donna’s too busy trying to get over her ex to fret about where her life is going long-term.

One night after a gig, she meets Max (Jake Lacy from The Office), a cute, kind, and un-hip businessman and (unknown to Donna at the time) one of her mother’s former students. They get along famously, end up getting drunk together and having sex.

In a rare move for a movie heroine, Donna decides to have an abortion after talking with her roommate Nellie (Gaby Hoffmann) and gay friend and fellow comedian Joey (Gabe Liedman). But she has to wait a few weeks for her appointment — on Valentine’s Day. Though firm in her decision, she wonders if she should contact her hook-up to let him know. Then fate throws him in her path. When he turns out to be nicer and more interesting than she anticipates, that’s just a complication in her increasingly complicated life. The film settles in to follow the truth and consequences of their one-night stand. The more serious underlying story deals with the pangs of early adulthood.

Obvious Child is a smart, irreverent, edgy romcom about complex choices. The stand-up scenes are not hysterically funny; they reveal the nervous energy you feel in the crowd and in the comic when especially intimate details are shared. Slate delivers Robespierre’s casual dialogue with such self-deprecating charm that even a graphic description of the state of her underwear at the end of a day is weirdly entertaining. Ultimately, it is a fantastically frank and very funny comedy about the messy parts of life. But the audience with which I saw Obvious Child — a packed house of mostly young women — was with the film and its heroine from first laugh to last sniffle: Donna was someone they knew, maybe someone they were. She was privileged but bereft, self-hating but assured enough to walk onstage. Rated R. Opens June 6, 2014.