“The Other Woman” Review

The Other Woman Is a Revenge Comedy

After discovering her boyfriend Mark is married, Carly tries to get her ruined life back on track. But when she accidentally meets the wife he’s been cheating on, she realizes they have much in common, and her sworn enemy becomes her greatest friend. When yet another affair is discovered, all three women team up to plot mutual revenge on the cheating, lying, three-timing SOB. 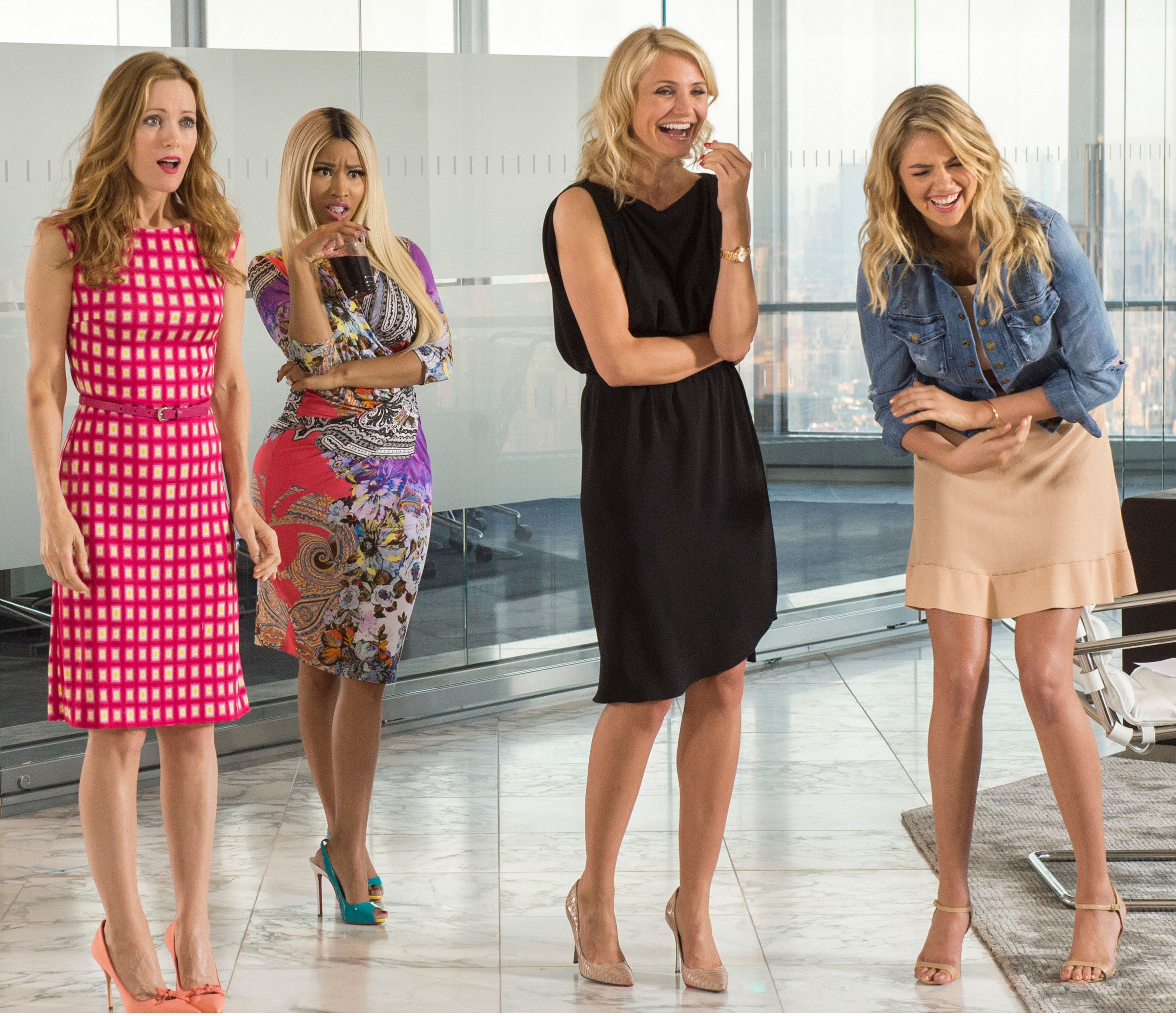 Leslie Mann, Nicki Minaj, Cameron Diaz and Kate Upton (left to right) bond over their plot to get their revenge on a cheating, lying cad. (Photo: Barry Wetcher/20th Century Fox)

In The Other Woman, Carly Whitten (Cameron Diaz) is a high-powered New York lawyer stunned to learn her new boyfriend, Mark King (Nikolaj Coster-Waldau), is married after a spontaneous, surprise visit to King’s Connecticut home dressed as a sexy plumber goes awry. Carly decides to surprise Mark at his home in Connecticut after he bails on a dinner to meet her father (Don Johnson) because of a water pipe break in his basement. But instead, Carly meets his wife, Kate (Leslie Mann), a devoted super-housewife.

Carly decides to dump Mark and move on, but Kate is devastated to learn her husband has been cheating on her. She has dedicated her entire life to her husband and their suburban home. A Stepford wife, Kate gave up her career and family plans to dedicate her entire life to Mark, his career and their suburban home. Her friends are his, and she has absolutely no one she can confide in except for her husband’s former lover.

Kate shows up at Carly’s law firm and later her apartment in various states of inebriated distress, longing for details about Mark and Carly’s sexual habits, as well as advice on how to proceed. Instead of directing their outrage toward one another, Carly and Kate slowly begin to bond over their joint enemy as they spy on him and plan their payback slipping him laxatives and estrogen tablets, mixing hair remover in his shampoo and investigating the offshore bank accounts where he’s stashed away an ill-gotten fortune.

After they catch him with Amber (model Kate Upton), a third woman caught up in Mark’s lies, all three ladies decide to take him down. As their strategies become more ingenious, their bond grows stronger. We last saw the theme in the 2006 comedy John Tucker Must Die and earlier in 1996’s much superior The First Wives Club.

The women, equipped with field glasses, trail Mark to Southampton and then to the Bahamas for some dirty financial dealings. His ultimate comeuppance, which takes place in a conference room at Carly’s law firm, is the kind of sadistic free-for-all that passes nowadays for farce.

The Other Woman was written by Melissa K. Stack, who also wrote I Want to F**k Your Sister. The script often feels stranded between gross-out comedy and romantic fantasy. The film’s structure and pacing are haphazard, the music clumsily tacked on and the raunchy elements weak and unnecessary. One moment we’re in the Bahamas admiring the beachfront scenery; the next we’re in a toilet stall, watching and listening as Mark noisily evacuates his bowels. Similarly, there are moments when director Nick Cassavetes seems to be operating on Hollywood-hack autopilot.

The actors definitely carry the movie. This isn’t the constantly smiling, ditsy Diaz we’ve seen in past movies like There’s Something About Mary or Charlie’s Angels. In The Other Woman, she plays a confident, impatient and queenly lawyer in her 40s. Mann’s character of the wronged wife is the movie’s best. Her performance as the naive, zany and needy wife, who can’t shut up is hilarious. She carries the movie’s emotion. Singer Nicki Minaj is amusing as Carly’s cynical assistant, Johnson is delightful as her Lothario dad Frank and Chicago Fire’s Taylor Kinney is strong as Kate’s brother Phil. This is a romantic comedy without the romance. It’s also not a nonstop laugh riot, but the big laughs are there. Rated PG-13. Opens Apr. 25, 2014.