Brick Mansions Has Parkour but No More

In a dystopian Detroit, abandoned brick mansions left from better times now house only the most dangerous criminals. Unable to control the crime, the police constructed a colossal containment wall around the area to protect the rest of the city. For undercover cop Damien Collier every day is a battle against corruption. For Lino Dupree, every day is a fight to live an honest life. Their paths never should have crossed, but when drug kingpin, Tremaine Alexander kidnaps Dupree’s girlfriend, Collier reluctantly accepts the help of the fearless ex-convict, and together they must stop a sinister plot to devastate the entire city. 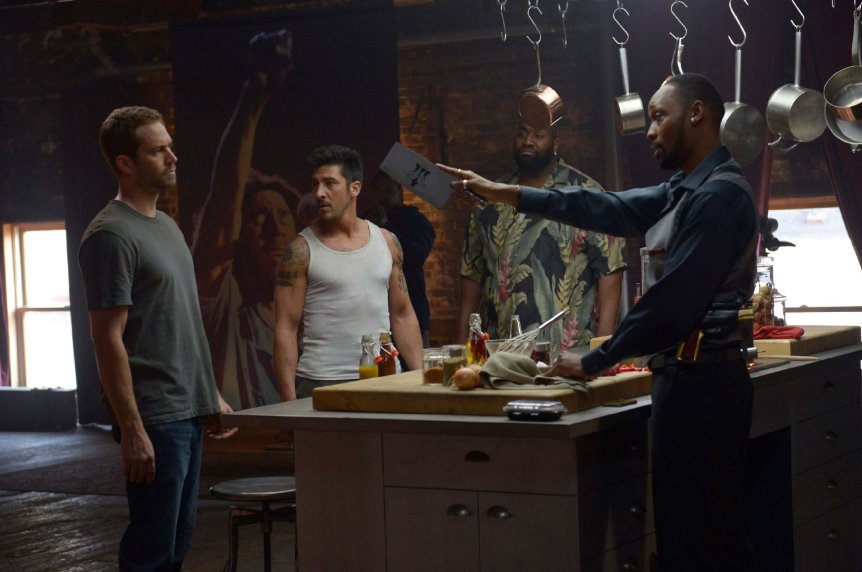 In 2018, Detroit has been divided in two. Brick Mansions is the name given to a 20-acre walled-off ghetto of the former Motor City that has become a lawless zone inhabited by criminals, drug dealers, gun runners and other derelicts. But the mayor (Bruce Ramsay) wants to build luxury housing in the space that police now guard to keep the criminals in, although the police guarding the area are as corrupt as those who live inside taking bribes to look the other way. They mayor gets backing from investors to redevelop the area, but must first relocate the residents of Brick Mansions.

Tremaine Alexander (rapper-turned-actor RZA) is the kingpin who runs the gangs, supplies the drugs and guns, and employs many of the residents. Lino Dupree (parkour co-founder David Belle who reprises his role from the French original) is an ex-con turned crusader for cleaning the place up and Alexander’s arch nemesis.

To clear the residents and make way for the development, the mayor sends undercover cop Damien Collier (the late Paul Walker) into the Brick Mansions with Dupree to disarm a “stolen” neutron bomb that Alexander, who Collier believes killed his father who was also a cop, has pointed at the city center. Since his father’s killing, Alexander has been seeking revenge, bringing the criminals in the Brick Mansions to justice.

Dupree is willing to join forces with Collier because Alexander has kidnapped Lola (Catalina Denis), Dupree’s ex-girlfriend, for 20 kilos of drugs Dupree stole and destroyed.

Brick Mansions is basically another of the Fast and Furious franchise with parkour stunts and a preposterous plot. Writer-producer Luc Besson has transposed his 2004 hit District 13 from Paris to Detroit for an English-language version. This was Paul Walker’s last fully complete performance, although his final film performance was in Fast & Furious 7, which he was filming at the time of his death in November 2013. There’s vaulting and flipping galore as well as the customary ration of fistfights, shoot-outs, car chases and mayhem for hardcore action fans, but the storyline doesn’t withstand close scrutiny – the “20-acres in the middle of the city” is hardly large enough to build what the mayor envisions and 2018 may have been as far into the future the writers could go to make the cell phones, cars and weapons believable, but hardly long enough for Detroit to become the crime mecca depicted — but that didn’t prevent the French version from racking up ticket sales. The movie also plays to stereotypes with white guys running the city and a white cop, while blacks and Hispanics make up most of the Brick Mansion residents and misfits. Rated PG-13. Opens Apr. 25, 2014.