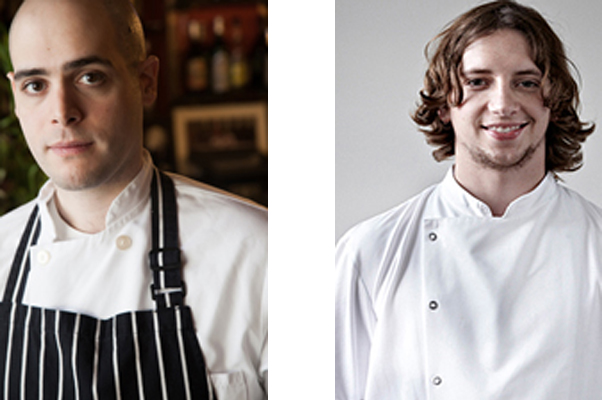 Basil and Wolff are still looking for a space where they can cook for just a dozen or so guests when starting out. In the meantime, they’ll run pop-ups out of Darnell’s Bar, 944 Florida Ave. NW, starting Feb. 18 and 19. Tickets are available online for $125. Tickets for the first two are sold out as are tickets for Mar. 2. Two tickets remained for Mar. 4 as of presstime. Future pop-ups scheduled include Mar. 16, 18 and 30 and Apr. 1.

The chefs will serve a six-course menu with various snacks and wine pairings by sourcing the best ingredients they can find in the area and making connections with small farms such as Sycamore Spring in Frederick, Md. The sample menu posted online includes amuses, razor clams with turnip, celery and pomegranate; stone crab with almond and sunchoke; black bass with cabbage, white bean and chamomile; daikon with a grain broth; aged Highland beef with pumpkin seed, argan and onion; black tea ice cream with potato yogurt and flax seed; coffee and petit fours.

As for the name — or 0º0’ symbol, in this case — it’s a symbol of Washington. A Zero Milestone was erected near the White House in the 1920s, intended to be a starting marker from which all highways in the U.S. should be measured. The granite construction didn’t end up serving that purpose, but it stands as a notable sight nonetheless.

“It’s a nod to the city and our beginnings,” said Basil. “This is just us starting out. The future is going to be what it is.” 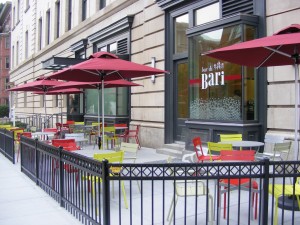 Bar di Bari will be replaced by Red Light at 14th and R Streets NW. (Photo by the Washington Post)

Robert Underwood and brothers Ari and Micah Wilder are joining Gordon at Red Light. The name refers to 14th Street’s colorful past as a red light district in the nation’s capital. It is slated to open in April. The collaborative efforts will result in imaginative sweets with potent spirits, taking “boozy desserts” to a new level. Red Light will serve nightly and also feature weekend brunch.

“Distinctive craft cocktails and inspired desserts in a fun, relaxed bar will be the ideal complement to 14th Street –D.C.’s top restaurant destination,” Gordon said in a press release. “Who doesn’t love delicious chocolate and champagne?”

Underwood, who was formerly head pastry chef at Komi and Marcel’s in D.C., will be executive chef at Red Light. His menu will offer 10 desserts changing daily, reflecting the season, and a featured soufflé. Dessert choices will be priced from $8-$10. A pre-fixe menu, complete with a cocktail or wine pairing, will also be available for $16-$20 per person.

The cocktail menu and wine list are being developed by the Wilder brothers, who will serve as Red Light’s beverage directors. Since 2008, when they founded Wilder Bros. LLC, they have created over a dozen successful cocktail programs and opened Fed Restaurant in May 2013. Their list for Red Light will include a selection of eight to 12 specialty drinks, as well as adult desserts that combine cocktail and dessert ingredients for a spirited treat such as the Cake Shake, a Red Velvet cupcake, homemade ice cream, Atlantico dark rum, Velvet Felernum and cocoa bitters. The menu will also offer a boutique wine selection as well as eight to 10 champagnes by-the-glass, including four champagnes on-tap.

Design studio SwatchRoom is redoing the 27-seat interior, which will have “love-nest” seating options of red leather banquettes and club chairs plus a sprinkling of two and four top tables. There will be an 18-seat concrete bar and a seasonal 44-seat outdoor patio.

Red Light will be open Monday-Thursday from 4 p.m.-close, Friday and Saturday from noon-2 a.m. and Sunday from noon-10 p.m. 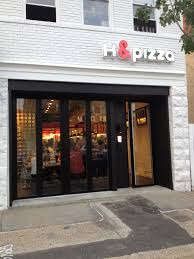 Fast-casual pizza parlor &pizza, owned by Steve Salis and Micahel Lastoria, plans to open its next D.C. location at 1400 K St. NW. The pizzeria will occupy 1,919 square feet in the building at 14th and K, across the street from DC Coast. It plans to open this summer.

&pizza, pronounced “and pizza,” has grown rapidly over the last year. What began as a single shop on H Street NE has expanded into another at 13th & U Streets NW. Three others are in the works including one at Monroe Street Market near Catholic University in the Brookland section of NE D.C., one in Bethesda and another in Germantown.

The restaurants serve individual pizzas that are customizable and cook in just a few minutes. 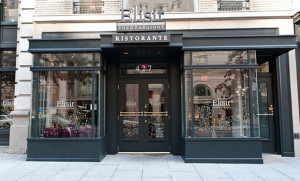 “After more than 2 years we decided to call it quits! Elisir and Osteria Elisir have made many people happy and will continue to live in the hearts of those who had supported us and appreciated us. Thank you to all of you Washingtonians. Our restaurant is now officially closed for good. I’ll see you soon…”

The Italian eatery, which opened as Elisir Restaurante, hasn’t had smooth going since it opened. Fargione altered the concept last March moving from white tablecloths and tasting menus to a more casual experience.

There’s no word yet on what’s next for Fargione. 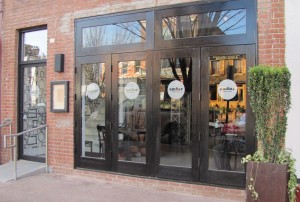 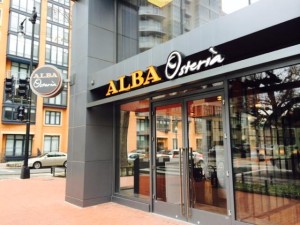 Also, Alba Osteria, located at 425 I St, NW, launched weekend brunch from 11 a.m.-3 p.m. for $29.95 per person. Diners can enjoy an all-you-can-eat selection of breakfast pizzas, egg dishes, pancakes and meatballs along with four brunch cocktails. Bottomless brunch must be ordered by the entire table.

Bottomless cocktails can be added for $18 per person. Featured cocktails include mimosas, infused prosciutto vodka Bloody Mary and a house-made beer-mosa.

Chefs on the move 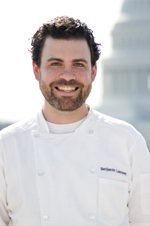 Benjamin Lambert is the new executive chef at 701 Restaurant, 701 Pennsylvania Ave. NW. Lambert brings 15 years of experience from restaurants in New York City, Washington and Baltimore. He began his career in New York City in 1999 working as a line cook under the direction of Chef Sottha Khunn at Le Cirque. In 2001, he moved to Union Pacific, where he worked as chef de partie under chef/TV personality Rocco DiSpirito.

Next Lambert moved to Cleveland to work at Johnny’s Restaurant where he was promoted to banquet chef. After a year in Ohio, Lambert returned to the Big Apple and began working as a sous chef at the Club Metropolitan, a dinner-only private club for residents of the Metropolitan Tower. In 2005, Lambert accepted a position at 71 Clinton Fresh Foods and Town Restaurant before deciding to relocate to the D.C. area.

Most recently, Lambert served as executive chef at the Goodstone Inn & Restaurant in Middleburg, Va. His responsibilities also included overseeing the planting schedule of the restaurant’s two-acre garden. 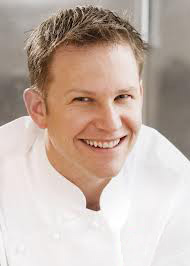 In another chef move, Matt Hill has replaced Liam LaCivita as executive chef at Liberty Tavern, Lyon Hall and Northside Social. all in Arlington.

Hill was the opening chef de cuisine at Range and worked closely alongside Bryan Voltaggio before departing in mid-January. Previously, he had spent nine years with the Charlie Palmer Group starting at Aureole and culminating with a five-year stint as executive chef at Charlie Palmer Steak in D.C. Hill is a 2000 graduate of the Culinary Institute of America in Hyde Park, N.Y.

Liberty Tavern sous chef Miljohn Dimaano has been promoted to chef de cuisine for the American restaurant. He has been sous chef since late 2009. Prior to joining Liberty Tavern, Dimaano spent time in sous chef positions at Willow Restaurant and 2941. 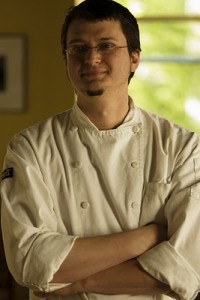 Finally, Daniel Singhofen is the new chef de cuisine at Blue Duck Tavern in the Park Hyatt Washington. Singhofen replaces John Melfi, who left in December. Melfi had been at Blue Duck since 2011. He has been tapped to work with chef Fabio Trabocchi at Trabocchi’s new Fiola Mare in Washington Harbour, which is expected to open sometime this spring.

Singhofen formerly owned and managed his own restaurant, Eola in Dupont Circle, from 2009 to Aug. 31, 2013. Previously, he worked at the Ritz-Carlton in Naples, Fla., and K Restaurant & Wine Bar in Orlando from 2004-2007. Then he formed his own company and set his sights on opening Eola, which focused on the farm-to-table movement. Singhofen developed relationships to highlight and support local, sustainable farming practices which were reflected in his daily menus.

“The decision to join the talented team at Blue Duck Tavern was an easy one for me to make,” said Singhofen. “The similar emphasis on farm fresh ingredients and seasonality at Blue Duck Tavern makes it a great fit, and I have relationships with many of the farmers that the restaurant currently sources from for the menu. It is the right next step and I could not be more pleased to join Executive Chef (Sebastian) Archambault and his talented team.”

Singhofen attended the University of Florida before earning his Culinary Arts degree in 2004 at the Culinary Institute of America in New York.