The new City Tap House across from the new City Center — the new development on the site of the old convention center — will likely be the go-to place for the area’s newest residents who can afford to pay $2,670 a month for a one-bedroom apartment or $600,000 for a one-bedroom condo. But for the rest of us, the new upscale pub with its tasty fare, small portions and big prices will be more for special events than our neighborhood watering hole.

City Tap House opened in early December at 901 I St. NW. The restaurant is owned by Frank Falesto, who also owns Public House and Harrington’s Pub and Kitchen in National Harbor. The original City Tap House is in Philadelphia.

“Washington, D.C. was an obvious choice for our concept,” said Jonathan Ball, regional director for Public House Investments, a management company that oversees multiple restaurant concepts including City Tap House. “There is a lot of positive development in the city at the moment, which reminded us of the eclectic vibrancy when we launched the original City Tap House in 2009, centered in the University City neighborhood of Philadelphia.”

Streetsense redesigned the former 901 Restaurant & Bar with a rustic industrial design with exposed wood beams, interior stone panels, copper bar and light fixtures and an open kitchen complete with brick oven. The strong elements are complimented by the cooling earth tone fabrics and the sleek, dark wooden tables and chairs. The restaurant can seat 180 customers including 40 in the bar/lounge area with floor-to-ceiling windows. There’s also a private dining room that can accommodate up to 100 people for a seated dinner. 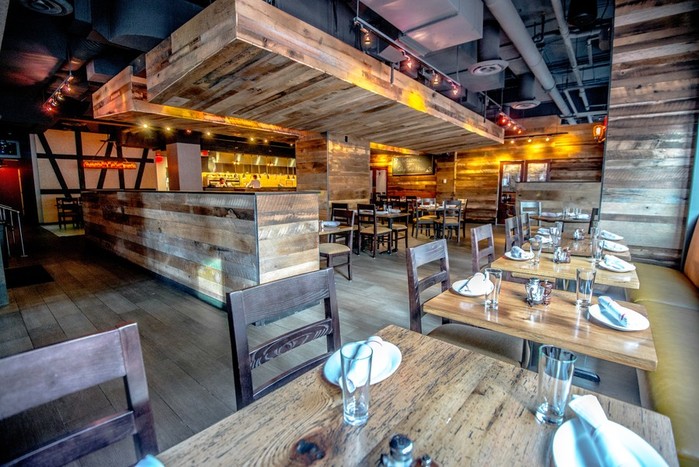 With more than 40 beer lines and two beer engines, City Tap House features 43 different local, national and international beers on draft ranging from $6-$10 and another 20 or so in bottles. Popular brews such as Allagash, Weinhenstephaner, St. Feuillien and Sierra Nevada will be available along with domestic and European craft stalwarts such as Founder’s, Bell’s, Bosteels, Schneider and Goose Island as well as local staples from Three Stars, DC Brau and Mad Fox. They also have a wine and cocktail menu.

Andy Farrell is the restaurant’s beer director. Farrell has 15 years of restaurant experience, including seven as chef in Italian, Latin, American regional and steakhouse venues. He also has extensive bar training and will be testing to receive his Cicerone certification this month. Prior to opening City Tap House Philadelphia in May 2010, Farrell served as operating partner at Bridgid’s in Philadelphia, which specializes in Belgian beers. In September 2013, he attended Sierra Nevada Beer Camp, assisting in the brewing of a Munich Dunkel Lager.

“The beer program is at the heart of what we offer,” said Farrell. “We want it to be approachable, unpretentious and community driven.” 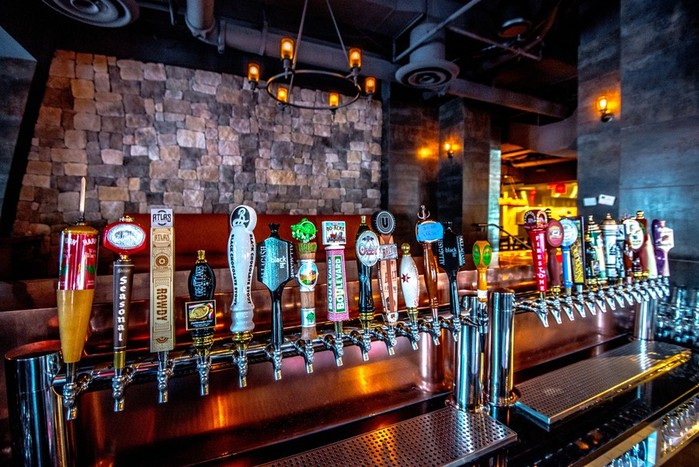 Open only a month, upscale pub just redid its menu. Executive Chef Scott Swiderski’s retooled menu includes six brick-oven pizzas ranging from $12-$18. On a recent visit, I tried the 12-inch honey goat cheese pizza with sliced red onion, pistachios, rosemary and truffled honey. This was tasty with the sweet honey and pistachios offsetting the goat cheese, but good for two to share as an appetizer since it is more personal sized than dinner sized (and priced at $13, one of the less expensive).

Snacks, which range from $7-$12, include bacon popcorn and candied peanuts, duck fat fries, ten spice wings and skillet fried shishito peppers. Appetizers, which range from $10-$21, include blue crab mac and cheese with fontina cheese and lump blue crab (you could taste the crab, but the cheese was a bit mild for my taste), foi gras French toast with roasted apple and port gastrique, and sweet corn and crab hushpuppies with honey-thyme butter and a citrus remoulade. 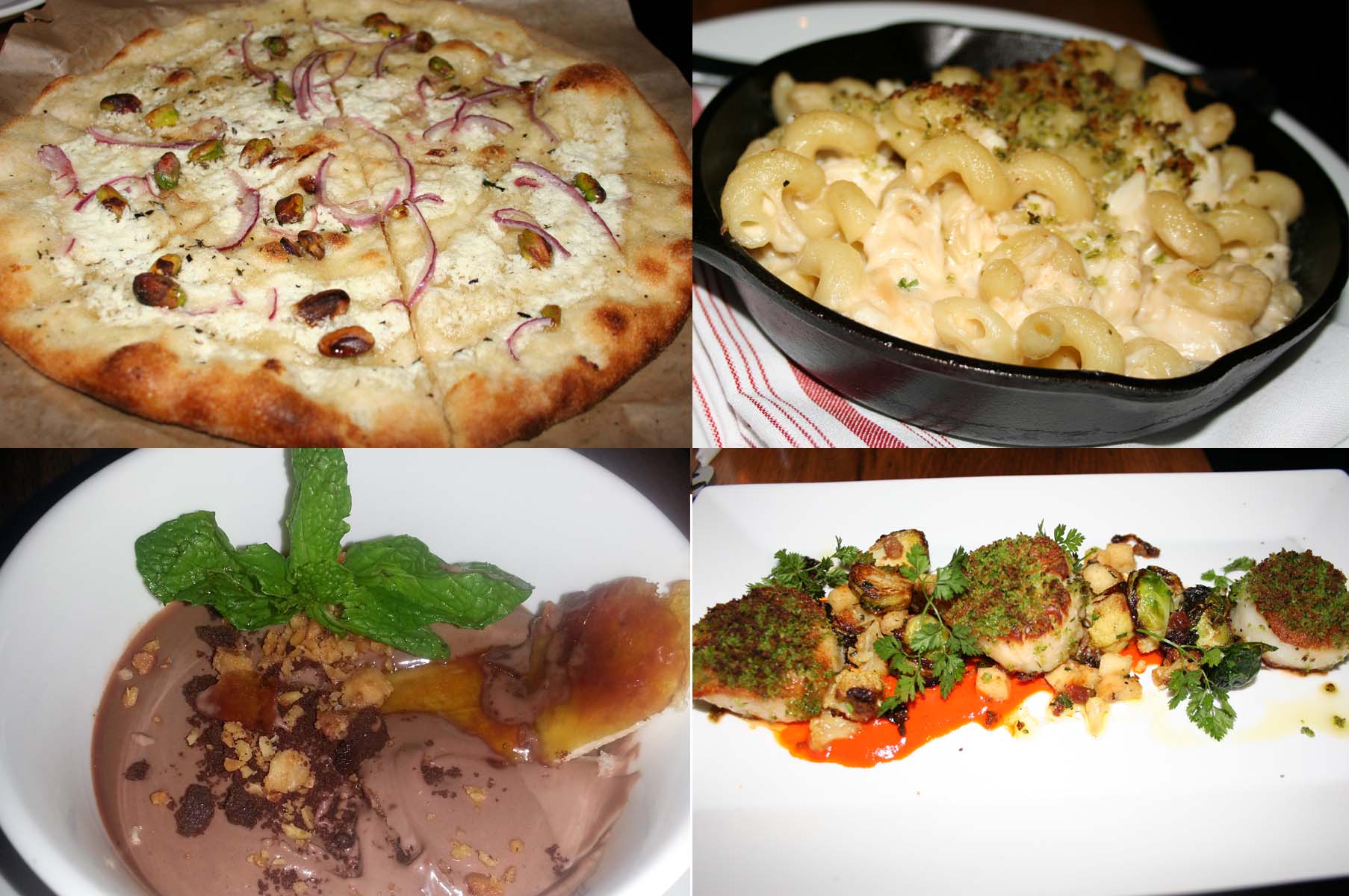 Entrees ($22-$32) include a ribeye with truffled mashed potatoes, foraged wild mushrooms, caramelized cipollini onions and a bordelaise sauce; a lobster roll with poached lobster, celery, green onion and mayonnaise served on a buttered roll with duck fat fries; and rabbit bolognese with Benton’s bacon and pecorino romano over bucatini pasta. I had the seared jumbo scallops with curried cauliflower (the star of the plate), crispy Brussels sprouts (no so crispy), apples, pancetta, piquillo pepper coulis (yummy!) and a herb persilade ($27 for three scallops). The pub also serves mussels ($12-$13), salads ($10-$15), “Craftwiches” served with duck fat fries or a green salad ($12-$26) and a daily special from 5-10 p.m.: Monday is bucatini and clams; Tuesday is chicken and waffles, Wednesday is braised beef short ribs, Thursday is a crispy pork shank, Friday is a fresh seafood dish and Saturday is a butcher selected steak or chop.

Desserts range from $7-$9 and include a Mason Jar cheesecake with strawberry jam; Pot de Creme, a chocolate mousse with caramelized bananas and toasted macadamia nuts; a peanut butter blondie smash with vanilla gelato and a chocolate stout sauce; and an apple cherry cobbler with salted caramel gelato. They also serve Dolcezza artisinal gelato.