“The Marked Ones” Movie Review

Only Mediocre Scares in The Marked Ones

Jessie, a young California Latino, begins experiencing a number of disturbing and unexplainable things after the death of his neighbor, shortly after his high school graduation. As he investigates, it isn’t long before Jessie finds he’s been marked for possession by a malevolent demonic entity. It’s only a matter of time before he is completely under its control. He begins to be pursued by mysterious forces while his family and friends try to save him. 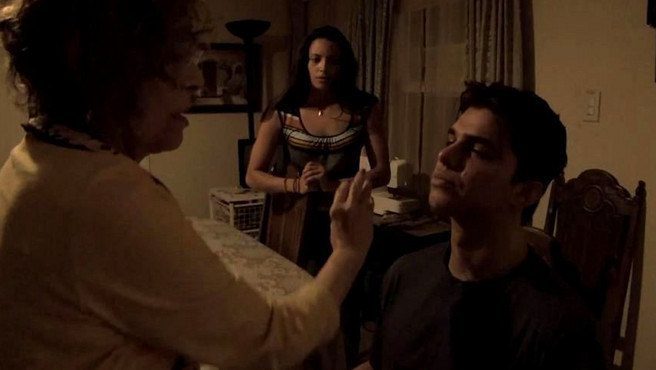 The main focus of this installment of the Paranormal Activity franchise is on Latino teenage friends Jesse (Andrew Jacobs), Hector (Jorge Diaz) and Marisol (Gabrielle Walsh) and the mysterious old woman living in the apartment below Jesse’s, whom the teens joke is a witch.

After his elderly neighbor, Anna (Gloria Sandoval), is murdered by a classmate, Jesse and best friend Hector investigate the woman’s apartment only to discover a basement filled with demonic iconography, ritual tools, mysterious VHS tapes – and, most disturbing of all, pictures of Jesse. Jessie has been singled out for demonic possession, though the devil looking to get inside isn’t so unreasonable that he won’t perform a few supernatural parlor tricks to amuse his future host.

Soon after, Jesse notices a sizable bite mark on his arm, followed by enhanced physical strength and otherworldly abilities. It isn’t long before the super-powered fun wears-off as violent paranormal events leave Jesse fearing that he is being haunted by a malevolent entity – desperately seeking a way to banish his pursuer. With each passing day, the situation becomes increasingly dire, as Jesse, himself, grows more powerful (and subsequently more dangerous) – now a potential threat to his friends and family.

There are a handful of creepy moments throughout Paranormal Activity: The Marked Ones, but the scares are mostly of the sudden-loud-noise variety. The story engages only superficially with supernatural beliefs in Latino culture, instead relying on stock demon-possession imagery. At least it doesn’t waste too much time on skepticism, since by now the audience knows where these movies are heading. Aside from the change in setting, from upper-middle-class suburban tract housing to a working-class apartment building, The Marked Ones doesn’t add a whole lot to the Paranormal formula.

While previous installments attempted to develop new angles on the series’ found-footage style, here writer-director Christopher Landon, who wrote the last three installments, opts for a straightforward approach, just having his characters film everything that happens with handheld cameras. There are no creative surveillance-video setups, just people running in fear while still making sure to capture all the action with their cameras. So that means shaky camera work — take Dramamine before seeing this movie or take a barf bag along. It’s obvious the series has nowhere left to go, and this one should never have been made. Hopefully, there won’t be any more. Rated R. Opens Jan. 3, 2013.