Those dining in will be taken to a table by a greeter and handed a computer tablet from which to order and swipe your credit card. The food is then brought to your table on real (not paper or plastic) plates. If you’re getting takeout, a touch-screen kiosk near the entrance lets you place your order or you can go up to the register. Soon, you’ll be able to order online.

A computer tablet diners will use to order their meals and pay. (Photo: Washington Post)

Diners can build their own burger for $6.99 or try one of the signature burgers, which range from $7.99 to $10.99. The patties — angus beef, ground turkey, chicken breast or vegetarian black bean — all get a spice rub such as toasted peppercorn and herb; chili with cumin and paprika, yellow curry and tumeric, or toasted peppercorn and herb. The spice mixes are also on every table along with other condiments. Bolt Burgers tops its burgers with tomato and sweet basil sauce, creamy herb and garlic, or habanero, cilantro and lime sauce as well as relishes including crunchy Asian slaw, black bean, or corn and Vidalia onion.

The menu also includes a grilled cheese and salads, including a “burger bowl” with greens instead of a bun. Sides include fries that can be topped with any of the spice mixes as well as onion rings and crispy green beans. Bolt also offers smoothies, beer and wine.

The Capitol Riverfront may be the city’s next hot dining spot. On the heels of Bluejacket/the Arsenal’s opening, Michelin-starred restaurateur Michael White debuted Osteria Morini on Nov. 19 at 301 Water St. SE. The warm-toned Italian eatery is a nearly identical to White’s SoHo original, boasting a hearty menu inspired by the Emilia-Romagna region. 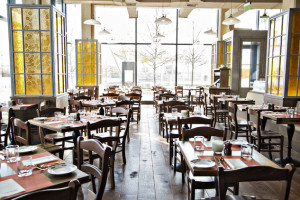 The restaurants’ namesake is Gianluigi Morini, chef/owner of the famed San Domenico restaurant near Bologna where White worked for seven years. The meat-centric menu falls includes a number of seafood dishes as a nod to the waterside location. Hearty bowls of agnolotti sauced with short-rib ragu or seafood stew are far from tapas — but executive chef Matt Adler, who cooked at the Manhattan flagship as well as the Altamarea Group’s Marea and Ai Fiori, suggests sharing multiple dishes instead of the individual appetizer-entrée-dessert approach.

Starters include wooden boards piled with Italian meats, cheeses and fresh fry bread; an array of crostini; hearty salads such as bitter greens, caramelized onion and a poached egg; and antipasti like prosciutto-mortadella meatballs or braised baby octopus over polenta.

Pasta is White’s specialty, and all are made in-house, including less-common varieties such as rag-like stracci, dainty pipette tubes and short curls of gramigna. Most arrive with more meats and cheeses. Among the pasta dishes are truffled ricotta ravioli with prosciutto or béchamel-laced lasagna with beef, pork and veal ragu. There’s a two-pound New York strip, which is priced at $82 and aged for 40 days by Pat LaFrieda Meats, the same purveyors behind the restaurant’s white label burger. The Florentine-style steak is cooked on a wood-burning grill and served for two with sweet-sour cipollini onions.

The restaurant is currently open for dinner, but weekday lunch and weekend brunch are set to start soon. Look for dishes such as Osteria porchetta, here in sandwich form on house-made bread with shaved fennel, Emmenthaler cheese and rosemary-mustard aïoli. White will be opening the nearby Nicoletta Pizzeria, which will serve takeout pies that can be eaten with beer and wine at patio tables overlooking the river.

Osteria Morini is open 5-10 p.m. Sunday-Thursday and 5-11 p.m. Friday and Saturday. The bar opens at 4 Monday through Saturday, and remains open an hour after dinner concludes.

Lupo Verde, a rustic Italian bistro, is scheduled to open at 1401 T St. NW, on Dec. 16. From the owners of Ulah Bistro, Tunnicliff’s Tavern and Station 4, it will include a market that plans to sell 50 cheeses, five of which will be made in-house, as well as house-made sauces, dried pastas, prosciutto and bread. Seventy percent of the restaurant’s menu will be available as carryout. 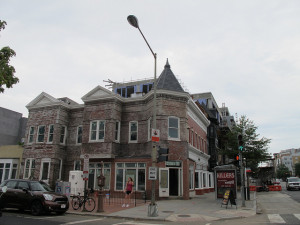 The menu at the 100-seat restaurant will include house-made pastas and roasted fish for dinner, and wood-fired pizza and panini for lunch, as well as small plates. There will be 100 wines by the bottle priced from $22-$250. Wine by the glass will be $6, with three wines on tap. Five beers and a selection of cocktails round out the menu.

Passersby might remember the space as the former temporary host of a Civil Rights-themed mural by the French artist JR while it was under construction. The mural is gone, and the space has been transformed into a homey environment with a fireplace and marble bar that seats 15 downstairs, with another 10-seat bar upstairs. The restaurant will be open for dinner service nightly, with late-night bar service on weekends. Lupo Verde plans to introduce brunch in January and, eventually, weekday lunch service. 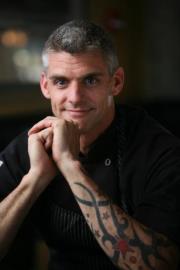 Chef Billy McCormick has parted ways with Diego Restaurant & Bar at 2100 14th St. NW after a brief stint there. The chef only joined Diego in October after the restaurant closed for a revamp.

The restaurant, owned by the same people who own Dupont Italian Kitchen, closed for retooling after a dispute between the owner and original chef. McCormick, the EatWell Group veteran who most recently worked at the revamped Virtue Feed & Grain, only was at the Tex-Mex restaurant a few month. The restaurant had opened in early August but closed after just two weeks, after the owner and initial chef parted ways.

Robert Cain, McCormick’s former sous chef at The Pig, was brought on as the opening sous chef.

There is no word on who is running the kitchen now. Diego is named after artist Diego Rivera, who was married to artist Frida Kahlo.

Jason Gehring, who was the chef at Astro Doughnuts and Fried Chicken has become the new pastry chef at Chef Frederik De Pue’s Table and upcoming Menu restaurants. The later is set to open in January. Now he’ll get the opportunity to bake breads, design plated desserts and create sweets for take out instead of just engineering designer doughnuts. 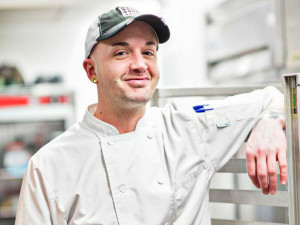 In his new job, Gehring will oversee the sweets programs for the two restaurants (Table at 903 N St. NW and the soon-to-open dining room on the top floor at Menu in the former Cafe Atlantico/Azur space at 405 8th St. NW, a market on the ground floor, the Bistro Bar on the third floor and De Pue’s catering company, 42 Degrees, which has already moved into the basement.

“I have a lot of different ideas for each venue,” Gehring, 36, the former pastry chef at Fiola, told The Washington Post, “but it’s a little too early” to reveal anything.

Andy Phan, owern of the Pho Factory in Alexandria, is opening Eden Kitchen in Eden Center in the Seven Corners area of Falls Church at 6793-C Wilson Blvd.

The 3,300-square foot noodle restaurant is currently awaiting permits, but hopes to open in early December. The menu will include almost a page of vegetarian options, featuring mixes of tofu, vegetables and mushrooms and of, course, the vegetarian pho with broth made from fruits and vegetables. There are also fish dishes, included a fried version in a garlicky, spicy fish sauce. A seasonal menu with be available with 10 rotating items, including sour soup with shrimp and a pork and vegetable soup loaded with watercress, tofu, ground meat, shrimp and Chinese mustard greens.

Chef Rob Rubba, formerly of Azur in D.C., is the new chef at Arlington’s Tallula and Eatbar, 2761 Washington Blvd., Arlington. He replaces Nate Waugaman who left after almost 1 1/2 years at the helm. 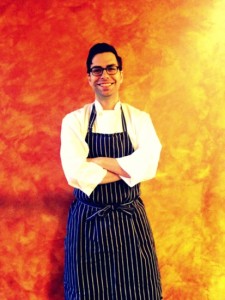 Rubba left Azur about a month before it closed. Prior to that, he worked at Philadelphia’s Le Bec Fin. Rubba, who is trained in both French and Japanese techniques, worked under Guy Savoy in Las Vegas and Paris, Todd English and Gordon Ramsay. He never went to culinary school, but learned on the job.

The 31 year old recently introduced a new lighter menu at Tallula with a larger vegetable presence. He describes it as progressive American with a focus on root-to-stem preparations. Rubba’s menu will also include sprouted items, which the chef says are at their most nutrient and most packed with energy, such as lentils, mung beans and flax.

A new addition to the menu is a scallop dish featuring cauliflower pureed, pickled and caramelized and will use the stems (shaved and glossed with warm butter) and leaves (dressed with olive oil and sea salt.)

At the beginning of the year, Rubba plans to update EatBar’s menu with more dishes suited for the by-the-glass wine program and more vegetable-based dishes.

Brunch with Santa at the Kennedy Center 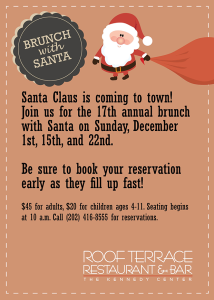 Santa Claus is flying into town early again this year, parking his reindeer and sled atop the Kennedy Center, 2700 F St. NW, as the Roof Terrace Restaurant prepares for its 17th annual Holiday Brunches with Santa. Families and friends are invited to gather amidst live jazz music and skyline views, while visiting with Old St. Nick to share their holiday wishes and receive a special memento.

Patrons will enter Roof Terrace’s kitchen to choose from an array of items, including seasonal salads, freshly shucked oysters, house-baked pastries, French toast and made-to-order omelets. The kids table will feature favorites such as macaroni and cheese, chicken fingers and fries while each adult will receive a complimentary glass of mimosa or sparkling wine.