Restauranteur and Food Network star Bobby Flay will be at the opening of his new Bobby’s Burger Palace in Westfield Montgomery Mall in Bethesda next Tuesday, Oct. 22. It is the 16th location for his burger chain. 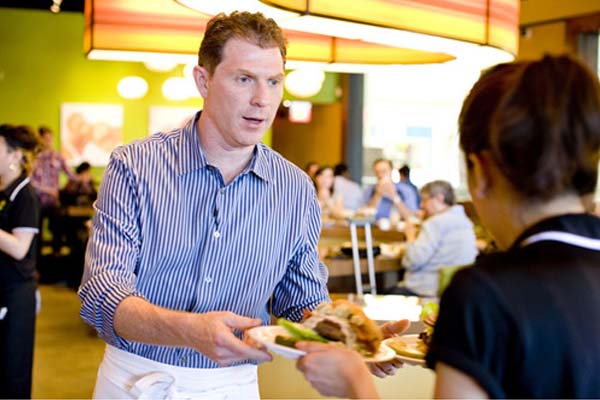 Flay will open the doors to his newest restaurant and greet customers at noon. He will sign autographs and be available for photos.

The menu offers six-ounce burgers with 10 topping combinations and any of the patties, which can be “crunchified” with potato chips, or made with ground turkey or chicken breast instead of beef.

The burger chain has two other locations in Maryland — College Park and at the Maryland Live! Casino in Arundal Mills — as well as This is the third Bobby’s Burger Palace for Maryland—as well as one at 2121 K St. NW and another at Potomac Mills. Another is planned for Baltimore’s Towson Square.

In other burger news, Smashburger, which opened a restaurant at 1739 Connecticut Ave. NW in Dupont in September and another at 10160 Fairfax Blvd. in Fairfax, will open additional locations. One at the Shops at Seneca Meadows, 20640 Seneca Meadows Parkway, Suite D1 in Germantown is set to open next Wednesday, Oct. 23. Two Virginia locations — Washington and Annandale Roads in Falls Church, and Leesburg Pike and Westwood Center Drive in Vienna — along with another at 4903 Cordell Ave., Bethesda, are slated to open in December. 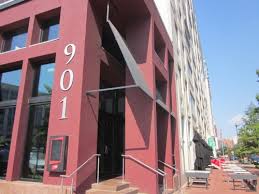 Philadelphia-based City Tap House is opening mid-November at 901 I St. NW, where 901 Restaurant and Bar had been.

The D.C. location will be similar to the Philadelphia restaurant with “an elevated American pub fare and gourmet brick oven pizza menu,” according to the eatery’s website. The online menu includes blue crab mac and cheese, charred octopus, mussels, seven brick oven pizzas and daily supper specials. It will have a rustic, comfortable dining and bar setting adjacent to an open kitchen.

The craft-beer focused bar and restaurant will serve microbrews from around the country and the world with 60 rotating craft beers on tap plus a lengthy bottle list. There will also be seasonal outdoor dining on a patio.

The group behind City Tap House has Public House and Harrington’s Pub and Kitchen in National Harbor. 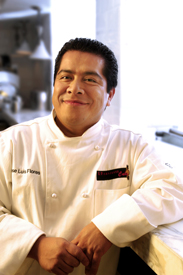 Chef Richard Sandoval has hired Jose Luis Flores as the new corporate pastry chef of Richard Sandoval Restaurants. Flores will oversee the dessert menus for all of Sandoval’s Washington restaurants including Zengo, Masa 14 and both El Centro D.F. locations, plus the upcoming Toro Toro.

In 2010, Flores joined Richard Sandoval Restaurants to serve as the executive chef at Zengo New York. His role was expanded to oversee the kitchen at Toro Toro, Sandoval’s Pan-Latin steakhouse in Miami.

Born in 1973 in a small town outside of Mexico City, Flores’s grandmother was a cook for wealthy families and would often bring home ingredients that were exotic to the Mexican pantry, piquing Flores’s culinary curiosity. After losing his father at the age of eight, he took over cooking for his family under the tutelage of his mother. When he turned 16, Flores decided to make cooking his career and found a job as a dishwasher in a local restaurant. Eventually he moved his family to New York City and began working at the China Grill in Manhattan where he eventually became head pastry chef.

Prior to joining Sandoval, Flores worked for Emilio and Gloria Estefan under the restaurant group cb5. Together they opened Bongos Cuban Café at the Seminole Hard Rock Casino in Hollywood. Flores is the author of the cookbook Dulce: Desserts in the Latin American Tradition. It is one of the first cookbooks to be devoted to Latin-America sweets.

Flores trained at the Edwal Notter Confectionary School, as well as Canainpa, the National Industry of Bread in Mexico City. 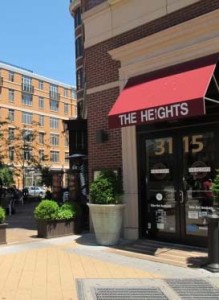 The Heights will close to remodel Oct. 28-Nov. 1. (Photo: PoPville.com)

The Heights to Close for Remodel

The Heights in Columbia Heights will close after Oct. 27 for a five-day makeover before opening with a new chef.

EatWell DC, which owns The Heights along with others including The Pig, Logan Tavern, Grillfish and Commissary said it will temporarily close The Heights to remodel it.

When it reopens, Chef Kerry Tate, formerly of Slate Wine Bar, will be at the helm with a focus on local dishes and ingredients sourced from the restaurant group’s farm in La Plata, Md. New dishes will include maple-brined pork tenderloin with cider-Dijon pan sauce and fried oysters with jicama kimchee. The beverage program will also be overhauled with “unique beers” and handmade cocktails.

In advance of the closure, the restaurant is throwing a sale on its closing day with 50 percent off all food and drinks. Also look for all-night happy hour in the lounge when it reopens, set for Nov. 1, and a garden party with half-price beer that weekend. 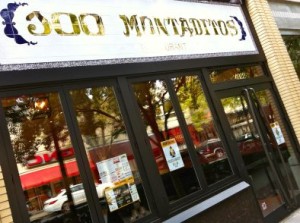 A montadito is tapa-sized roll filled with the ingredients such as Spanish ham, chicken, cheese or vegetables. Montaditos are essentially charming bite-sized finger food and can be served hot or cold. About half of the restaurant’s ingredients will come from Spain.

The space has been completely remodeled with dark salmon-colored walls covered with old-time photographs of Spanish buildings, street scenes and monuments in antique frames. A white marble-topped bar rings the right side of the restaurant and there is a 100 Montaditos sign made with Spanish tile at the entrance. The tables and chair were imported from Spain. It seats 83 people inside and 12 outside.

There are 100 montaditos, including dessert montaditos, that range from $1-$2.50; entrees of French fries or brava fries (potato wedges) are $1.50 for a small or $3 for a large; tapas including iberico ham, iberico ham and manchego cheese, herb chicken wings, fried clam strips and calamari are $5; and Ceasar, Mediteranean, arugala goat cheese and Asain salads are $5. Every Wednesday is Dollarmania with $1 montaditos, appetizers and soft drinks. Spanish mixers, beer, wine, larger appetizers and salads are $2. You can also order three samplers that include six different montaditos for $8 or two for $14.

The D.C. Food Truck Association is holding one last food truck festival at the Fairgrounds near National’s stadium this year with the return the Halloween-themed TruckerBOO on Oct. 25. In 2011, the last time TruckerBOO was held, participating trucks were decorated for Halloween. 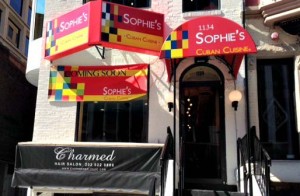 Sophie’s Cuban Cuisine opened this month at 1134 19th St. NW in the former Singapore Bistro space next to Science Club.

Owner James Lambert, a Reston native, hired general manager Carlos DiLaudo of Bethesda and head chef Ed Reynoso of Beltsville, Md., to help run the fast-casual dining eatery. The restaurant was started in Manhattan by the Luna family. They currently have eight restaurants in New York City. This is the first franchise.

The restaurant offers dine in, take out, pick up, delivery and catering. It is open Monday-Friday 10 a.m.-8 p.m.

Pub and the People coming to Bloomingdale 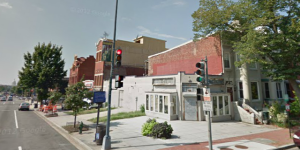 Pub and the People will open in this vacant building the Bloomingdale neighborhood by the end of the year. (Photo: Google Street View)

Construction is slated to begin at the end of the year with opening set for next summer of Pub and the People at 1648 N. Capitol St. NW in the Bloomingdale neighborhood. The building is currently vacant.

The pub/restaurant will be a neighborhood restaurant and bar with 70 seats inside and a potential for up to 100 outside. The largest patio in the area will also provide a view of the U.S. Capitol Building. Indoors, the space will resemble the city’s early pubs and restaurants with exposed brick and wood, one of the owners, who is also one of the owners of D.C. Reynolds told the the PoPville blog.

Chef Dan Dalcin, currently the sous chef at Black Salt in Palisades, will be the new restaurant’s chef. His menu will offer traditional American cuisine with influence from Southern, Southwestern, seafood, Asian and vegetarian cuisine. The restaurant will serve generous portions — no small plates here — using local ingredients when possible and some interesting new twists on old favorites. Drinks will include craft beers and cocktails with an emphasis on D.C,-based breweries and distilleries.