Last week, I, for the first time, entered a pie contest. I found the entry online the weekend before and jumped on the chance to spend a Sunday at the Bethesda farmers’ market and bake pies all weekend. It was a wholesome Sunday, to say the least. 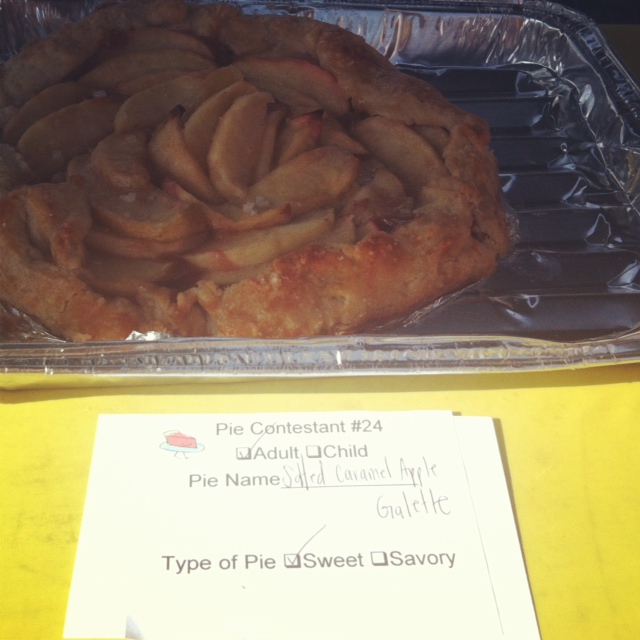 A salted caramel apple pie stands up to its competition. (Kristy McCarron/DC on Heels)

The days leading up to it, I tossed and turned about the type of pie I was to present: Strawberry rhubarb is always my best, but rhubarb at the end of the summer? Is it too early for apple? Is apple too … overdone? Are berries still at their prime?

My tossing and turning came to an end when I decided on a salted caramel apple galette. My logic was this: People will want something different from their traditional pie, so I eliminated doing plain apple. A galette will be a break from every other pie, and I tend to like the more rustic look of a free formed tart. Besides, salted caramel, in my opinion, is one of the best dessert flavor profiles.

My pie didn’t win. And here’s why:

When people go to a pie contest, they want to see a pie. Galettes are charming and certainly rustic, but people are here for a pie. Top your pie with a lattice crust and it’s even better. People also want apple pie. Or lemon meringue. Probably blueberry. And in the fall, they’ll want pumpkin. There’s a reason why these are the most sought out pies — because they just work. And they reinforce the nostalgia that comes with the idea of a homemade pie.

The winners, you should know, were strawberry rhubarb, blackberry and lemon meringue taking the blue ribbon.

I’ll absolutely bake my salted caramel apple galette again, but I certainly won’t be entering it for this month’s pie contest at the D.C. State Fair.

For the crust, I swear by America’s Test Kitchen’s pie crust that uses half vodka and half water for the liquid and half butter, half shortening or lard for the fat. I find that it makes a flawless, easy-to-work-with crust that is crumbly, buttery and oh-so flaky. I almost always have this crust stored in my freezer.

In a Food Processor, combine: 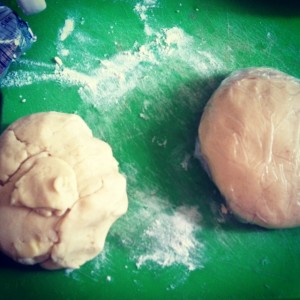 Add butter and shortening, while pulsing, until dough begins to form:

Add an additional cup of flour, followed by:

The crust will come together pretty quickly, so don’t overmix! Form into two disks, cover in plastic wrap and throw them in the fridge.

Once your crust is done and has been in the fridge for a bit (at least an hour), you’re ready for the filling.

Combine the above ingredients. Roll out the dough on a floured surface and paint the bottom with about two tablespoons caramel, leaving about 1.5 inches around the edge. Make sure that your crust is already on the baking sheet (or in the pie pan if you’re doing a pie instead of a galette) — it is incredibly difficult to move once its weighed down with caramel! You can use either a high quality caramel or you can try to take it on yourself. Here is an excellent recipe for caramel, thanks to Ina Garten.

Sprinkle the caramel with a generous (about 1.5 tablespoons) of kosher salt. Place your apples on top of the salted caramel, arranged in whatever way tickles your fancy. Fold up the crust and brush with an egg wash (1 beaten egg). Bake at 400 degrees for 40 minutes or until crust becomes golden brown. I also sprinkled in some extra caramel and salt on the top.