The Conjuring Combines Scares with Plot

Before there was Amityville, there was Harrisville. The Conjuring tells the true story of Ed and Lorraine Warren, world renowned paranormal investigators, who were called to help a family terrorized by a dark presence in a secluded farmhouse. Forced to confront a powerful demonic entity, the Warrens find themselves caught in the most horrifying case of their lives. 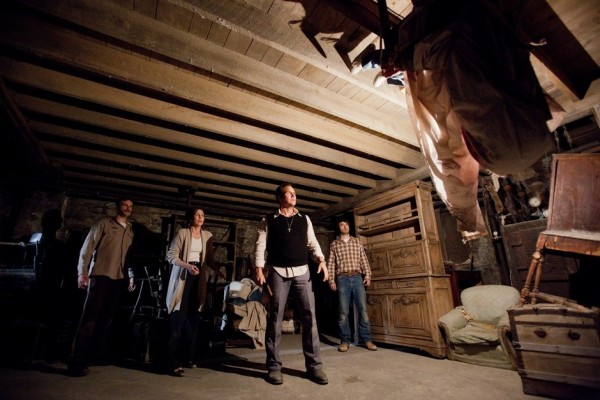 A sense of dread permeates The Conjuring from the start, and it’s delightful. It’s supposed to be. This is a horror movie, after all, in which Director James Wan proves himself to be moving quickly up the ranks of terror auteurs. The timing, pacing and character movement are outstanding. And it’s scary as hell.

Patrick Wilson and Vera Farmiga play Ed and Lorraine Warren, real people who investigated paranormal events and activities (The Amityville Horror is based on one of their most famous cases). They’re believers in the supernatural, certainly, but they also debunk cases in which earthly causes are at work (which is most, Lorraine tells one relieved couple).

In 1971, Roger and Carolyn Perron (Ron Livingston and Lili Taylor) and their five daughters move into a home in Rhode Island. It’s a sprawling old house out in the country, by a pond. The creepiness sets in early, when the family dog won’t come inside. Then all the clocks in the house stop at 3:07 a.m. They find a hidden basement room. The youngest daughter talks to an imaginary friend. Another sleepwalks. Rank smells come and go.

If you’re a fan of horror movies, you know what all this means: evil. And, sure enough, things get worse from there. Carolyn attends one of the Warrens’ lectures and persuades them to visit the house; it takes them about five seconds to realize this isn’t a hoax.

A little research and a lot of contemporary high-tech equipment (Super 8 cameras!) convince the Warrens and a priest that that an exorcism is needed. One problem: The Warrens aren’t Catholic, so it’ll take special dispensation from the Vatican. But whatever’s inside the house isn’t going to wait for them to wade through red tape.

Pretty familiar stuff, really, but there are a couple of things that make The Conjuring a lot better than the standard horror fare. One is the acting. Farmiga and Taylor both are outstanding in a genre that frequently gives short shrift to women characters, who too often are relegated to making bad decisions in halter tops. Not so here, with both women showing a fierce determination, though in vastly different ways.

The other thing The Conjuring has going for it is Wan. Yes, he resorts to a gotcha! moment here and there, but what Wan wisely chooses in most cases is a patient approach, setting things up, leading the audience on, the tension building until you practically demand to be startled. And Wan complies with that wish.

The “based on a true story” label is something of a gimmick since extreme license has been taken with the story. Yes, people existed with the names in the movie. Yes, there was a paranormal investigation and subsequent exorcism. But that’s about the extent of the fact within this fiction. The filmmakers wisely don’t attempt real-world authenticity; they accept the ghosts and demons as legitimate and, as a result, we buy into the premise rather than wondering whether the real-life case was a hoax or not.

The Conjuring represents a member of an increasingly endangered species: the R-rated horror movie that relies more on suspense and scares than blood and gore. That’s not to say there are no instances of horrific, stomach-churning visuals, but this is predominantly a ghost/haunted house tale and is largely devoid of the kind of slicing and dicing that characterizes movies established in the slasher subgenre. It is one of those rare gems in the horror genre that finds a spot beside the classics of horror due to Wan’s ability to balance an atmospheric dreadful tale involving well crafted characters with a haunted house. It is a mix of Amityville Horror and The Exorcist that will have your palms sweating and your heart pounding. It has a moody, edgy story that makes you sympathize with the characters and their struggle, but also has its share of frightening visuals and pee-your-pants moments. Yet it isn’t the scares that moves the story along. Rated R. Opens July 19, 2013.