Plot Is Similar to Olympus Has Fallen

Capitol Policeman John Cale (Channing Tatum) has just been denied his dream job with the Secret Service of protecting President James Sawyer (Jamie Foxx). Not wanting to let down his little girl with the news, he takes her on a tour of the White House, when the complex is overtaken by a heavily armed paramilitary group. Now, with the nation’s government falling into chaos and time running out, it’s up to Cale to save the president, his daughter and the country. 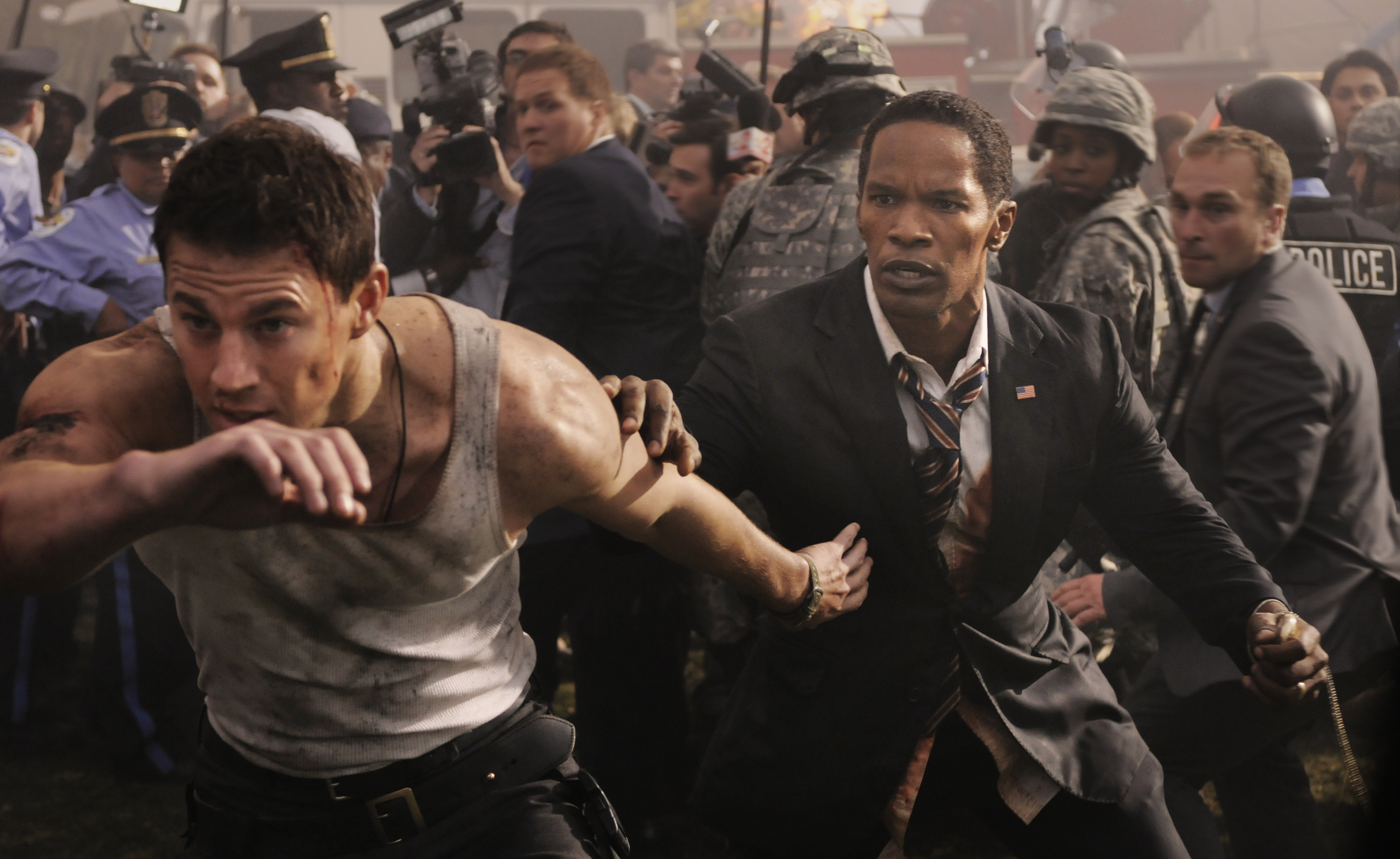 Cale has been trying to figure out his life for years, to get it together. He doesn’t really have the tools to put it all into place, but his heart is good. He’s always wanted to be his daughter Emily’s (Joey King) hero. And now that he’s realizing that he can’t be that, due to mistakes he’s made, he thinks, “Well, she idolizes the president – if I can’t be her hero, maybe I can help protect the guy who is.”

When the president decides to pull all troops out of the Middle East, the big arms manufacturers don’t like it. They hire mercenaries to take over the White House (code name Castle), kidnap the president, launch nuclear missiles at various foreign cities and keep the war going.

Helping Cale and President Sawyer fend off the ruthless mercenaries and their quest to seize control of the White House is tough-as-nails Special Agent Carol Finnerty (Maggie Gyllenhaal). Finnerty has just turned down Cale’s application to join the Secret Service even though years ago, they had a love affair. It was a long time ago, but they were crazy about each other. He still takes her breath away. But Finnerty’s strength is knowing when to go by the book and when to toss it out. She’s good at her job, and to be excellent at any job, you have to follow protocol. She very much believes in the system – that’s why she turns down Cale. But when she sees people making decisions that are clearly wrong, she takes charge – and that means doing some unorthodox things.

Emil Stenz (Jason Clarke) is a former Special Forces guy – doing some nefarious things in strange places – and he became a gun for hire. And now, he’s been hired to try to take over the White House, to kidnap the president and try to make some money.

Speaker of the House Eli Raphelson (Richard Jenkins) is a career politician from the opposing party, and Martin Walker (James Woods) is the outgoing head of the Secret Service, who has brain cancer and who’s son was killed in a failed mission ordered by the president.