’Internship’ Is One Big Google Promo

Billy (Vince Vaughn) and Nick (Owen Wilson) are two luxury watch salesmen in their 40s whose careers have been sunk by the digital world. Trying to prove they are not obsolete, they beat the odds by talking their way into a coveted internship at Google, along with tens of brilliant college students. But, getting in is only half the battle. They must compete with a group of the nation’s most elite, tech-savvy geniuses to prove that necessity really is the mother of re-invention. 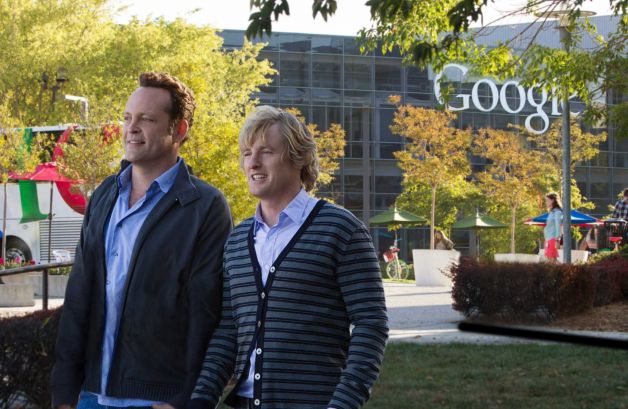 Hoping to reprise their Wedding Crashers success, Vaughn and Wilson team up again in The Internship. The two play the same tag-team roles they played in their far more successful 2005 onscreen pairing, but instead of a wedding, they’re crashing Google’s corporate offices, where they fast talk their way into internships after the bottom drops out of their salesmen gigs.

‘The Internship is exactly what it seems to be: a comedy that provides two or three laughs. There are moments of fake uplift, in which one guy bucks up the other with a pep talk. But this is a pair of funny guys struggling with a weak script. Along the way, it touches on a few things that are true and disturbing about today’s economy — middle-aged people are being cast into poverty as technology wipes out their jobs; and young people, entering the economy, are fearful and dispirited, wondering if they’re ever going to make a decent living. But the Twentieth Century Fox movie deals with the issues in dumb and insensitive ways, missing the point and trivializing the problems. It also asks the audience to believe than anyone over 40 doesn’t know how to use a computer.

The script, co-written by Vaughn, celebrates entry-level employment at one of the richest companies in the world as the height of human aspiration. If you were to believe The Internship, all you need to thrive in today’s economy is drive and a willingness to travel across the country to work for free. Just think, with a little luck, you might be one of the 5 percent to get a permanent job from out of the intern pool! As for the other 95 percent, why think about them?

Vaughn is blustery and oblivious, Wilson is bumbling and sincere, and they become part of a team of interns — all in their 20s — competing against other teams in various categories, such as sales, app creation and customer service. One of the bright spots is the performance of Daily Show correspondent Aasif Mandvi, the humorless taskmasker in charge of the internship program.

Attempts to add some sort of tension are out of place and ridiculous. Billy’s fixation with Flashdance gets old. A game of Quidditch replaces a football challenge. It’s only a matter of time before Billy starts to nail everything in sight when he has a sunrise heart-to-heart with a saucy 20-something intern (Tiva Sicar). Instead he and Nick ladle out folksy wisdom and plenty of B.S. in their attempts to maximize the team’s “Googliness.” Romance is left to Nick, whose attempts to woo Aussie Google exec Dana (Rose Byrne) leads to a charming restaurant scene that shows Wilson’s still got it.

There’s a potentially good comedy to be made about old-school guys trying to make a go of it in a youth-dominated digital world, but director Shawn Levy and screenwriter Jared Stern overdose on moronic excursions, including an outing with the two guys and their 20-something fellow interns (the company calls them “Nooglers”) at a strip club. Also, Google is so lovingly portrayed that the film resembles a recruiting video touting the free food, nap pods, green campus and Google products. In fact, the movie is a massive product tie-in. Rated PG-13. Opens June 7, 2013