In celebration of Greek Easter (May 5), José Andrés and the folks at Zaytinya are in the middle of a five-week festival that features a special menu inspired by the traditions of Greek Orthodox Easter and Lent. As part of the festivities, Zaytinya hosted a market-to-kitchen cooking class led by head chef Michael Costa and  Greek author Aglaia Kremezi. 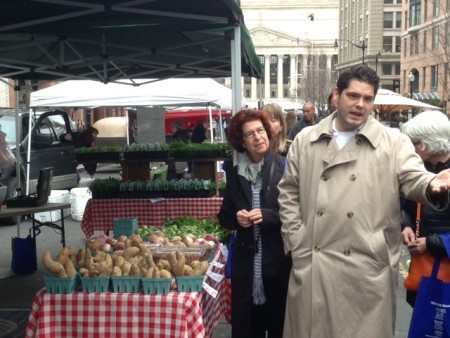 At the Penn Quarter farmers market, Costa and Kremezi demonstrated firsthand the seasonality secrets of healthy Greek eating. Kremezi described the Old World cooking philosophy as a tradition of practicality. “Without supermarkets, people ate what was growing and available.” Now in vogue among foodies, the seasonal diet, she said, has always been a staple of Greek living and is a sustainable tradition that is good for the planet and maximizes taste.

Back at Zaytinya, our instructors set to work on the meal. While dicing onions, simmering beans and even sawing a tough lamb neck, Costa shared Greek cooking secrets while Krememzi gave the dish on recipes found in her book The Foods of the Greek Islands: Cooking and Culture at the Crossroads of the Mediterranean. 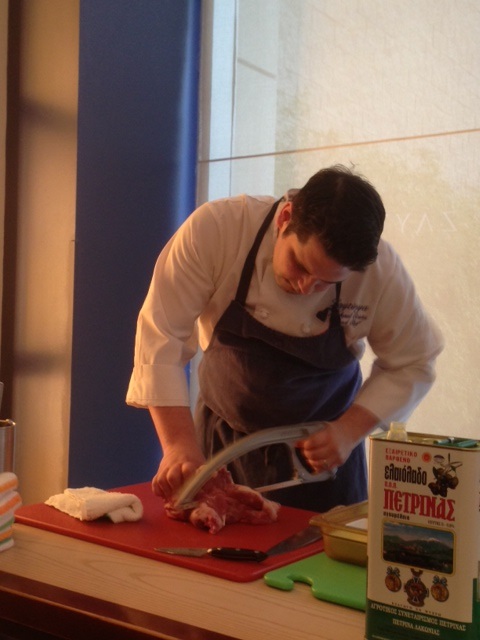 Zaytinya’s class held all the appeal of a cooking show with the bonus satisfaction of tasting the finished product. The bean stew combined cranberry beans, sweet onion, diced tomatoes and a little lamb sausage .  As Kremezi said, one of the health benefits of Greek cooking is its use of meat as flavoring instead of the main plate protein, a practice originating from meat’s rarity in the hilly Greek landscape where raising stock was difficult. 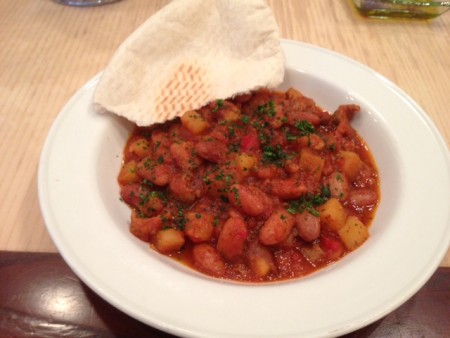 The braised lamb neck with greens came courtesy of local mutton mongers Border Spring Farms. Costa toted the lamb neck as an underutilized cut that is as tender and tasty as it is affordable.

For a toothsome finisher, the class enjoyed baked apples in spiced sweet wine syrup. The caramelized delight came with a scoop of ice cream, just as nature intended. 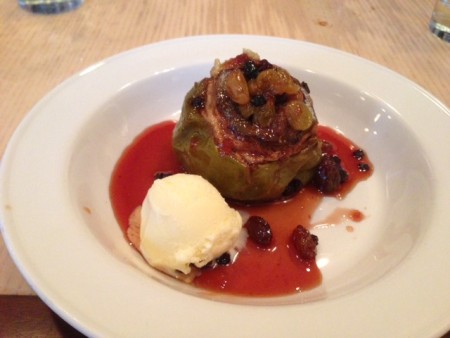 Even though your peeps and chocolate bunnies are probably stale at this point, Greek Easter continues at Zaytinya until May 5 when they will host a Greek Easter brunch with spit-roasted lamb shoulder served alongside dishes like Omeleta me Horta, a Greek omelet with kale, garlic yogurt and kefalograviera cheese. To book a reservation, call (202) 638-0800 or book online.