Daikaya is a new Japanese ramen restaurant that opened in Chinatown across from Gallery Place and the Verizon Center on Valentine’s Day. But, the food and service on this particular Wednesday left a lot to be desired. In fact, the noodles in one of those foam cups you cook by adding boiling water was tastier than what was in my bowl. 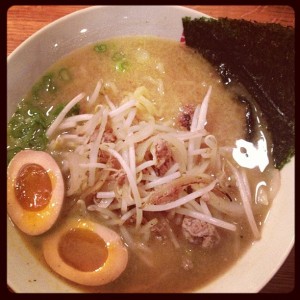 Shoyu ramen at Daikaya in Chinatown. Photo by Daikaya

Partners Katsuya Fukushima, Yama Jewayni and Daisuke Utagawa opened the Sapporo-style ramen bar downstairs at 705 6th St. NW next to Graffiato first and plan to open a 90-seat izakaya (Japanese bar with restaurant) upstairs soon. First-timers may have trouble finding the place, which has only an 8 1/2-by-11 inch sheet of paper on the door for a sign. But the building has a distinctive Asian fan motif on the upper floors.

Fukushima, who worked for José Andrés at Cafe Atlantico and Minibar, as well as at Vidalia and Cashion’s Eat Place, is running the kitchen at both restaurants. The ramen is cooked in an open kitchen at the back of the restaurants with a counter for diner seating around it.

The night I visited, diners were packed into small eight-person islands with uncomfortable stools instead of chairs. Diners are seated side-by-side and must hold their coats on their laps while trying to slurp their soup with spoons and chopsticks. The noise level is high, and it is hard to hear your friends and the server. Until recently, the restaurant was only open from 5 p.m. to midnight, but is began opening for lunch on March 2. Reservations are not accepted. 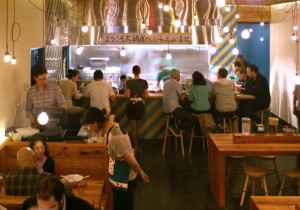 The interior of the Daikaya ramen bar in Chinatown. Photo by Daikaya.

Our server wasn’t very attentive and our dumplings never arrived until we asked about them, 30 minutes after we ordered and after our ramen arrived. She didn’t even seem to remember that we ordered them, but mumbled that it takes about 12 minutes. I had the shoyu ramen. The roast pork was fatty, the noodles sparse and the soy egg flavorless with an over abundance of bean sprouts. Others said the basic shio was good, but the vegetarian dish fell flat too. I’m not sure about the gyzoa, since ours never arrived. There are no desserts, but there is always Crepes on the Walk outside Gallery Place.

Hopefully, with some more time under its belt, Daikaya’s food and service will get better. But based on my first experience, I won’t be going back.